Robert Greubel and Stephen Forsey are a horological duo which form a deeply technical namesake watchmaking brand. Best known for their inclined tourbillon complications, they recently released the SIHH 2018 Greubel Forsey GMT Earth. For this new SIHH 2018 novelty, Greubel Forsey challenged themselves with a complication of the more terrestrial kind – a literal globe depicting Earth from North to South Poles. More, ingeniously, incorporating a three-dimensional depiction of Earth as opposed to the usual hemisphere domes meant that the dynamic duo had to re-think the watch head’s architecture, taking a holistic approach towards movement and case design.

The new SIHH 2018 Greubel Forsey GMT Earth provides an amazing 360° view of planet Earth from the North to the South Pole. First unveiled in 2011, the GMT Earth was a technical feat achieved with original movement architecture in relation to the case shape and dimensions, more importantly, revealing the three-dimensional Earth required complex machining of sapphire crystal. Beyond the artisanal element, the brilliant 3 dimensional spinning globe is made from blue oxidised titanium light enough for the globe to pivot from a hidden point without impeding one’s view but also geared to accurately replicate the Earth’s natural rotation. Thus offering an intuitive view of three time zones simultaneously to within a quarter of an hour, a remarkable bit of technical ingenuity. As a bonus, the case mid adjacent to the replica world allows not just for viewing of the equatorial area.

Furthermore, the reverse side of the timepiece displays 24 time zones with the summer and winter times to complement the universal time indicated by the terrestrial globe. The SIHH 2018 Greubel Forsey GMT Earth offers remarkable depth and dimensionality beyond the obvious globe complication; from the highest point of the dial, with the hour, minute and small seconds indications to the red triangular GMT indicator and the power reserve, there’s a lot to take in before you even reach the most mesmerising aspect of the Greubel Forsey GMT Earth, the brand’s 3rd pivotal Invention, the Tourbillon 24 Secondes. 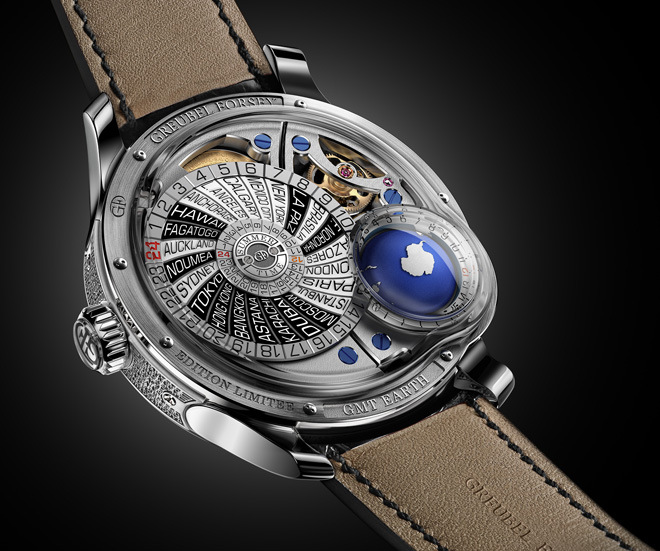 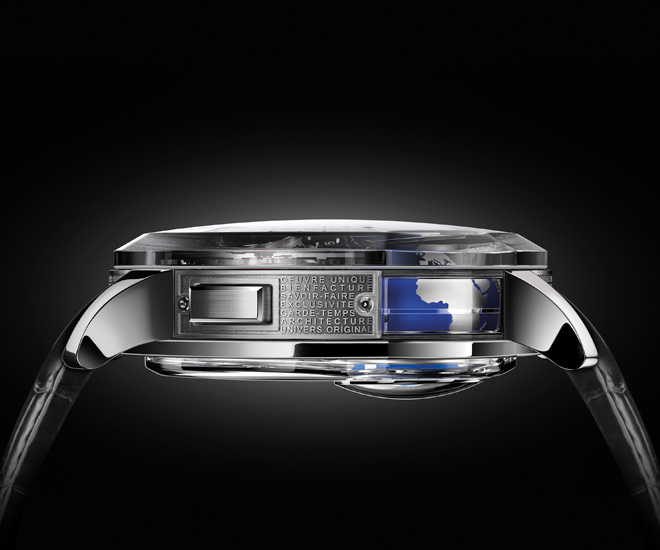 The proportions of the case were constructed to accommodate the high-domed sapphire crystal bezel and the special artistry on the caseband. The characteristic lateral plates bearing engraved inscriptions that encapsulate the key values of Robert Greubel and Stephen Forsey decorate the case body, too bad it doesn’t state that it required an average of 450 hours for finishing and decoration.