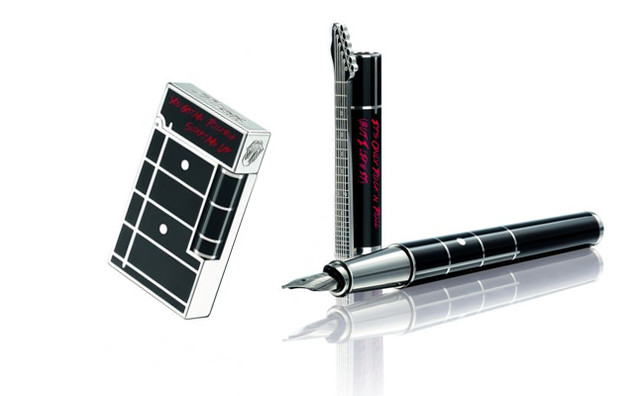 On June 30, S.T. DUPONT unveiled a limited edition paying tribute to the legendary rockers. Only 1,962 pieces, a nod to the year of the group’s creation, will make up this luxury collection.

With more than 400 million albums sold around the world, the Rolling Stones long ago reached legendary status, but Brian Jones, Ian Stewart, Mick Jagger, Keith Richards and Charlie Watts, to name just a few, are now being immortalized through this line of writing instruments and other luxury objects.

S.T. Dupont’s master goldsmiths and master lacquerers worked side by side to create this collection, which includes two writing instruments from the Néo-Classique range: a ballpoint (€1,400) and a fountain pen (€1,500).

The pens, coated entirely in black placed lacquer and palladium, bear a pen clip meticulously engraved with the legendary five string guitar played by Keith Richards. To top off the craftwork, the pen cap is embellished with the lyrics of the band’s songs “Start Me Up,” “It’s Only Rock N’ Roll (But I Like It),” “You Got Me Rocking” and “All Down The Line.”

A “Ligne 2” lighter, also in black placed lacquer, also showcases the iconic guitar, as well as the lyrics to come of the Stones’ biggest hits (€1,500).

The collection also includes palladium cufflinks that feature the famous tongue logo (€300), as well as a line of MiniJet lighters that come in white or black (€120).