Louis Vuitton is rolling out its Spring/Summer 2016 campaign with a little help from Lightning, a character in the “Final Fantasy” video game franchise. 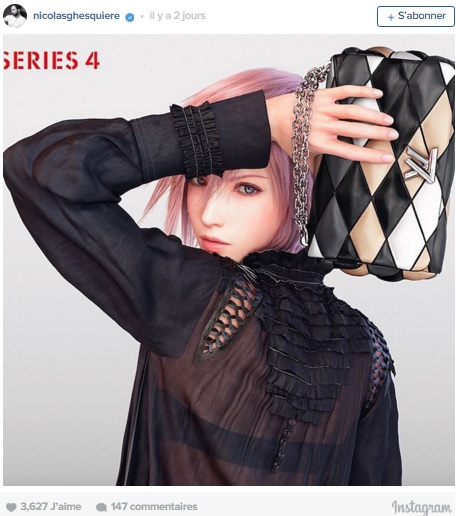 Geeks and nerds are the fashion industry’s largest untapped market…and it is a growth market at that. Well the Internet is abuzz with news that no less an august fashion house than Louis Vuitton is rolling out it latest Spring/Summer 2016 campaign with a little help from Lightning, a character from the immensely successful “Final Fantasy” video game franchise.

The AFP reports that Louis Vuitton creative director Nicolas Ghesquière has cast this character as the lead in the campaign. Of course this does not mean Louis Vuitton will be suddenly find its way into gaming conventions or that the brand will be opening a flagship store at the Googleplex but we think it is a harbinger of things to come.

Ghesquière revealed the first images from the campaign in two posts on Instagram, Monday December 28, showing the RPG character Lightning modeling looks direct from the SS 2016 runway show, which had strong references to digital technology and gaming.

The brand partnered with Japanese artist Tetsuya Nomura of Square Enix (developers of “Final Fantasy”) to create the animations.

See the short video of Lightning’s Vuitton debut below: