The Starwood-owned luxury brand has opened the doors to the largest property in their portfolio in Macau, a glitzy 400-room hotel on the Cotai Strip. 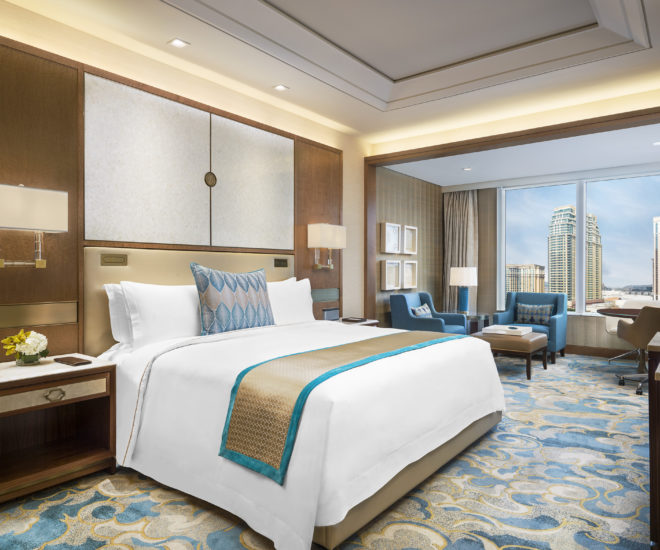 Bigger is definitely better for The St. Regis as the grand old New York name gives Macau a run for its money. Starwood-owned luxury brand The St. Regis has opened the doors to the largest property in their portfolio in Macau, a glitzy 400-room hotel located on the Cotai Strip. The St. Regis Macao, Cotai Central (the official name and spelling) marks the brand’s seventh hotel in Greater China and brings the chain to the world’s largest gambling center – Macau rakes in several times more revenue than its North American counterpart, Las Vegas.

Guestrooms and suites range from 53 to 477 square meters and include a ‘multi-experience dining venue’ that offers contemporary, high-end cuisine, as well as bistro-style dining.

Best known for introducing Americans to the Bloody Mary cocktail at their flagship New York location in the early 1900s, the Macau location will also house the St. Regis bar but give their signature cocktail a distinctly local twist. The Maria do Leste (Mary of the East) will honor the area’s Portuguese heritage with pink peppercorns, cinnamon and piri-piri spices.

Guests will also have access to the Iridium Spa with panoramic views of the Strip from the 38th floor, and an outdoor pool with 2,460 square meters of deck space and private cabanas.

The opening of The St. Regis in Macau follows on the heels of Studio City, a $3.2 billion casino and entertainment resort that opened to much fanfare in October with the help of celebrities like Leonardo DiCaprio, Brad Pitt and Robert De Niro.

Designed to offer a comprehensive guest experience that stretches beyond just gambling, the sprawling hotel complex includes family-friendly attractions like a Batman-themed flight simulator and a figure-8 Ferris wheel, alongside restaurants, bars, and luxury retailers.

The move follows the business model adopted by Las Vegas, which has transformed itself into an entertainment and fine dining hub for visitors interested in more than just gambling.

Declining casino revenues following Beijing’s anti-corruption crackdown and a slowing Chinese economy are also driving hoteliers to rethink their developments and have been blamed for delaying the opening of another highly anticipated resort, the Wynn Palace Cotai. Originally scheduled to open in March, the $4.1 billion hotel is now set to open in June.