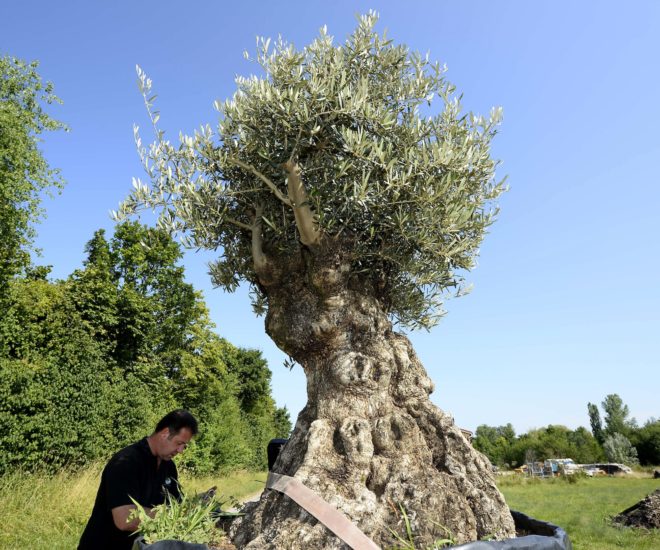 Great olive oil can be extremely pricey but what about the olive trees themselves? Some people like to splurge on traditional luxury but a growing number of wealthy Germans prefer to pay tens of thousands of euros to move olive trees from their sunny habitats to cold northern climes.

With their gnarled, thick trunks, most of the centuries-old olive trees imported from Spain are past their fruit-producing prime.

Rather, the sculpture-like trees are sought for their aesthetic value and the Mediterranean touch that they can add to German gardens, better known for their geraniums, berry shrubs and gnomes. Some are even prepared to pay as much as 20,000 euros ($22,000) for a very old olive tree.

“I no longer need to get on a plane, I can stay at home and enjoy my olive trees. It’s better for the environment,” said Karl Heinz Maier, who owns two such trees in Willsbach, a village north of Stuttgart.

One of them, aged 400 years, stands proudly at the entrance of his villa. The second plant, at a relatively young age of 120 years, has found its place in the exotic garden of banana, lime and orange trees.

Olive trees are a synonym for longevity in some countries, as it is not uncommon for them to live for over a millennium. But they are defeated by the cold.

To help them survive the sub-zero German winters, they are wrapped in a thick plastic and fibre mattress, and heated with a spiral-shaped apparatus, said Torsten Jablonski, who sold the trees to Maier.

Jablonski said that as a result of the anti-frost strategy, none of the 800 olive trees he had brought to Germany had died from the cold.

Every year, the German businessman imports hundreds of olive trees from Andalusia, Spain which he then sells on to often wealthy clients from Germany, the Netherlands, Austria and Switzerland.

“These are extremely robust trees that do not fear transport,” said Jablonski.

But Nasles said having to take such extreme measures to ensure that the trees stay alive over winter is problematic in itself.

Nasles went as far as to call it a “scam”, saying there are “some crafty people who make money out of this.”

But Jablonski shrugged off the criticism, saying the trees are well cared for.

“For some of my clients, it’s a real sacred object” that they pamper like a baby, he said.

And to illustrate how close to the heart the trees can get, Jablonski recounted the example of a customer who was separating from his wife.

When she walked out, “she left with the heater in the middle of winter,” said Jablonski.