Having married his long-time girlfriend in Mallorca last October, Rafa Nadal has recently been preparing for another major event – the arrival of his new 80 Sunreef Power. One of the world’s best-known sportsmen since winning his first Grand Slam as a teenager, Nadal has lived his whole life in Mallorca. And as a native of the stunning Balearic Islands off the coast of mainland Spain, the tennis superstar has long enjoyed yachting as a calming retreat from his arduous training regime.

Yet when the Spaniard sought to trade up his MCY 76 and buy a larger boat, he signed up to buy hull four of Sunreef’s current flagship motor yacht long before the first unit had even launched.

Francis Lapp, founder and President of Sunreef, recalls: “In 2017, he visited our booth at the Cannes Yachting Festival and stayed one or two hours. In 2018, when we were showing the 80 sailing cat, he visited our stand for three days! We explained the 80 powercat would offer similar space with a little more beam, and we made the deal.” 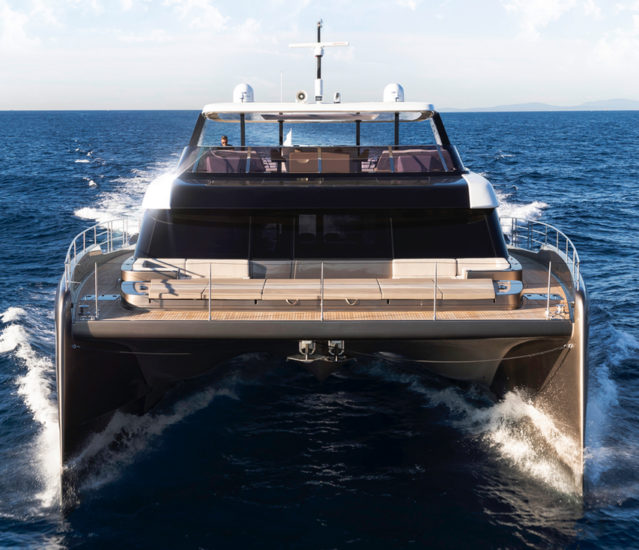 In fact, Nadal – like us – only saw an 80 Sunreef Power for the first time when the model premiered at last year’s Cannes Yachting Festival.

Aria, the first hull, was unveiled at Cannes one year after the Sunreef 80 sailing catamaran had her debut at the same show.

The Sunreef 80 is the biggest model in the builder’s new range of sailing catamarans, which also prompted a new range of powercats, according to Lapp.

“We received fantastic feedback from our sailing yacht clients, but we quickly witnessed new demand for motor yacht options,” says Lapp, who founded the company in Gdansk in 2002. 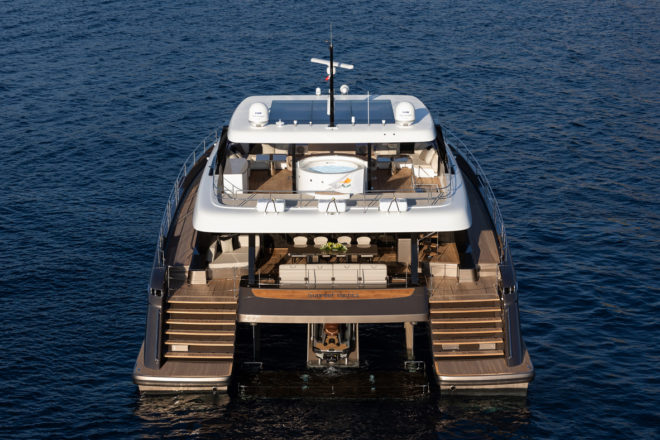 The innovative jetski ‘garage’ sits under the aft cockpit sofa

Although appearing a year after the 80ft sailing version, the 80 Power is actually an evolution of two previous Sunreef powercats: the 70 Power launched in 2008 and the 60 Power from 2012.

The success of the models, which sold 17 units in total, prompted Lapp to think bigger still, an idea that was realised after the evolution of the new sailing range.

“We took all the knowledge of the 70 and 60 motor yachts, then applied it to the 80 Power and a new generation of motor yachts,” Lapp said.

Despite sharing a model name with the company’s flagship sailing catamaran, the 80 Power was designed from scratch, with a completely new hull. 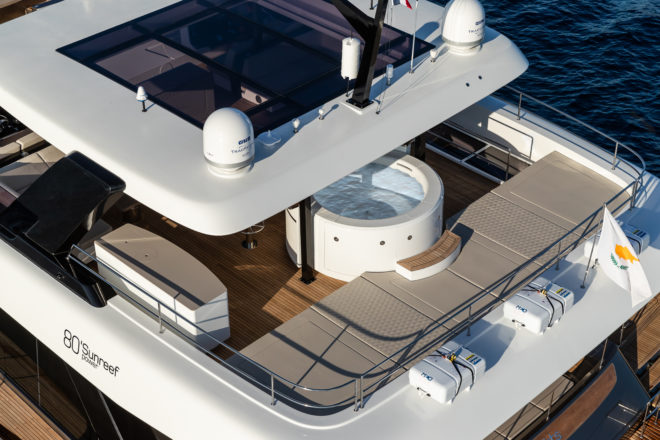 The flybridge has an enormous sunbathing area; hull one features a jacuzzi

“We don’t just take the mast off a sailing cat and say, ‘There’s a powercat’. The hulls are completely different,” Lapp emphasises.

LEADER OF THE PACK

As seen on Aria, the 80 Power’s hull has a bold, contemporary style and high bulwarks.

Aria is fitted with teak decks, while the interiors and décor were customised to the tastes of her owner, whose brief was for a Miami high-rise style décor that offered both comfort and privacy.

A huge covered cockpit welcomes guests and has a wide sofa, a dining table and four aft-facing chairs. Doors open fully to an enormous saloon with large windows on all three sides.

Portside is a large L-shaped sofa, coffee table and chairs, while there’s a long dining table to starboard, with seating provided by a large sofa on the far side and a row of chairs. Forward is a bar and a helm station, which sit either side of a central door to the enormous foredeck. 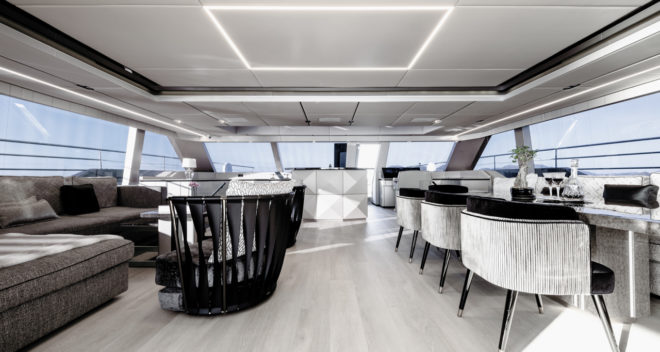 However, the saloon and pretty much all on-board spaces can be customised. The saloon, for example, can accommodate a large galley on either side or forward, while the forward area can even be used for a master suite, with a double bed facing the bow terrace.

The foredeck is one of the show’s signature spaces, a vast area with an L-shaped sofa and a coffee table on either side, and an almost full- beam row of sunpads in front.

On the upper deck, the immense flybridge can also be customised. On Aria, there’s another vast expanse of sunpads at the back, although the centrepiece of the aft area is a round spa pool surrounded by a great semi-circular bar with four fixed bar stools offering great views. The foredeck features an enormous row of full-length sunpads

On each side further forward, there’s a corner sofa, coffee table and helm station – so, three in total – while the centre of the flybridge has been left clear like a dancefloor, indicating that this could be a great party boat.

In fact, both the flybridge and aft cockpit have been equipped with lavishly sophisticated home entertainment systems.

However, the real party piece on Aria is the jetski garage, which sits under the aft cockpit sofa on the main deck.

The entire sofa can be pivoted upwards and aft, allowing someone to sit on the jetski before the central platform descends directly into the water and off you jet! 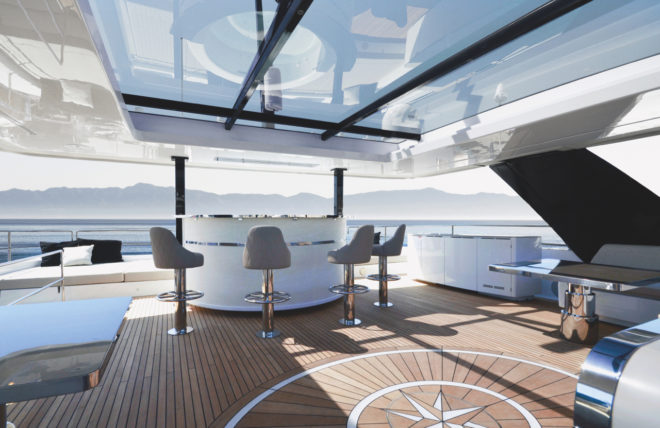 The immense flybridge can be customised; hull one could be a great party boat

Behind the cockpit, an aft platform lifts up and down between the two stairways and can also be used to carry a tender or other water toys.

There’s enormous flexibility in the cabin arrangement. Aria features an aft master cabin and a guest cabin in the starboard hull, while the port hull houses a VIP cabin forward, a crew cabin and galley aft.

The crew quarters, along with the galley and crew mess, can only be accessed from the aft cockpit, allowing both crew and guests privacy. There’s also a small crew cabin in the starboard forepeak.

Multiple layout configurations are available for crew and guest cabins, and the immense volumes in the hulls of the 80 Sunreef Power give plenty of room to tailor a layout to very specific requirements. 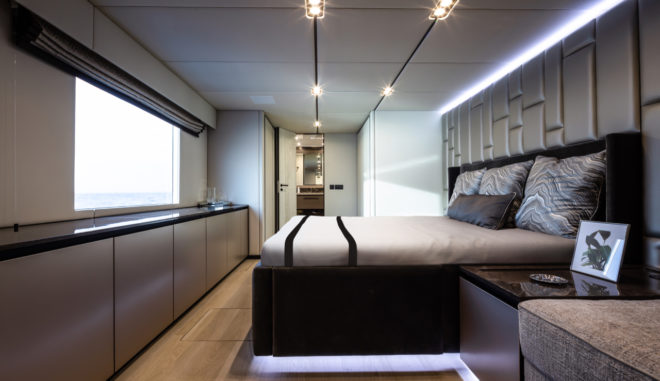 On hull one, the owner’s suite is situated in the centre of the starboard hull

Sunreef has a strong tradition of creating bespoke layouts and décor on its yachts, and that offer is enlarged on the 80 Power due to its enormous size.

Nadal’s customisations, for example, include a private drop-down balcony in the master cabin.

“When it comes to onboard customisation, the options are limitless,” Lapp says. “I am really happy when the client wants to change the layout and design because I don’t want to make two boats that look and feel the same

“In fact, I’m almost disappointed if a customer is happy with our default design layout and décor, although many are,” he adds with a chuckle. 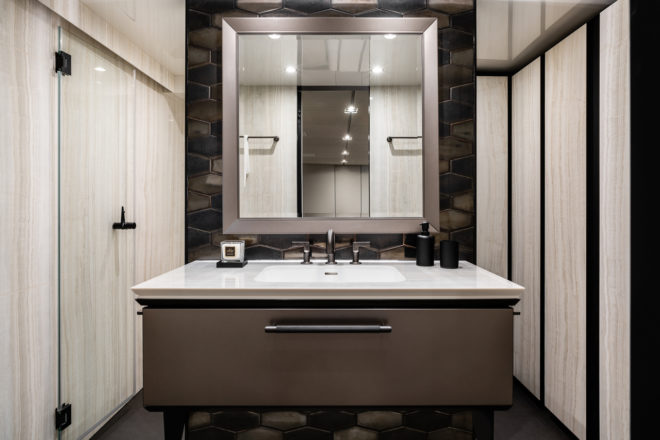 The design of this 78-footer is a milestone for the company and another example of the growing appetite for large powercats, a niche sector until recent years.

For now, the 80 Power is Sunreef’s flagship motor yacht and has a new owner in Mallorca who’s set to draw further attention to the Polish builder’s pioneering powercats.