The second of three gigayachts launched by Benetti over the course of four months, the 107.6m Luminosity was delivered last year and is now for sale with Fraser and Burgess. New photos and a video (below) show the scale of the six-deck megayacht, which at 5,844GT is the biggest private yacht ever built in Italy. 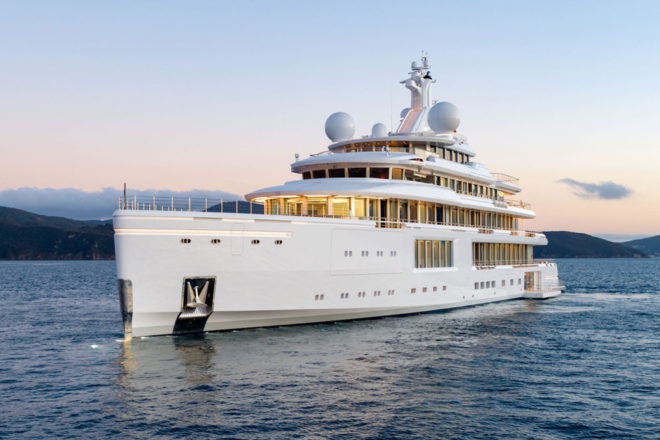 With 5,844GT of volume, the 353ft Luminosity is Benetti’s biggest-ever build

Luminosity has become a record breaker for Benetti, with over 800sqm of exterior glass around the main decks, while 3m-high windows offer uninterrupted views. There’s also an advanced Lutron domotics system with about 500km of cable run across her hull and superstructure.

The yacht has a top speed of 16 knots and is powered by an innovative hybrid propulsion system with diesel-electric engines and two ABB Azipods connected to a specially developed battery pack for vibration-free navigation in total silence.

The exterior of the plumb-bowed megayacht is a collaboration between Zaniz Jakubowski, RLD (Reymond Langton Design) and Giorgio M. Cassetta, while the interior design for the owner and guest areas and crew spaces was conceived and developed by Zaniz Jakubowski.

The forward helideck can take a Bell 429 helicopter

Features include a secluded, private deck leading towards the certified helipad capable of accepting a Bell 429 helicopter. The space and flexibility of this deck is currently set up to accommodate two cars including a Rolls-Royce Phantom, as well as a 24ft sailboat and two motor bikes.

A magnificent skylight at sun deck level fills the yacht with a longitudinal axis of light that illuminates the 17m staircase that passes through five of the yacht’s six decks.

On the bridge deck, a VIP stateroom and lounge stretches out onto a spacious aft deck, connecting through 9m-wide sliding windows. Clad in Malachite green paired with Lapis Lazuli blue and Belgian black marbles, this cabin has its own chic identity illuminated by a 3m-wide white onyx moon. 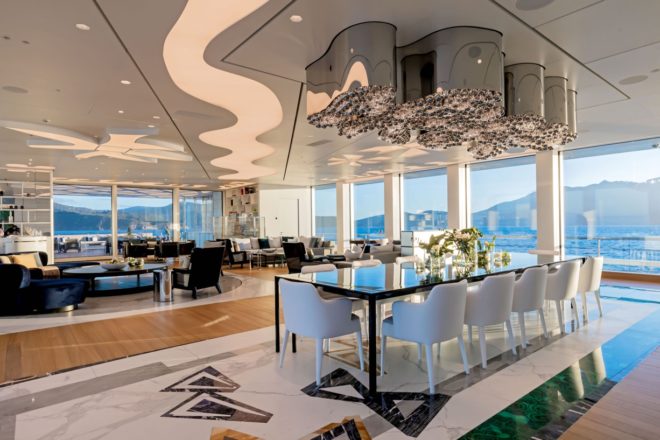 The owner’s deck, below the bridge deck, features a corridor decorated by 10 different types of marble. The stateroom itself is punctuated by granite details, with the owner’s bed able to lift electrically by 80cm for better views.

The main deck has a spacious lounge area and three exquisite staterooms, each one differing in its design and materials. Gold leaf riffs with brushed cement, while onyx and ceramic carved by water jets combine in a virtuoso feat of elaborate design. Further forward is a large galley fitted that can cater to world-class chefs.

Also on this deck, towards the bow, is the enormous tender bay designed to accommodate custom built tenders and toys, including a 40ft Limousine Tender, a 40ft Landing craft, and an additional 40ft luxury tender, all custom built. 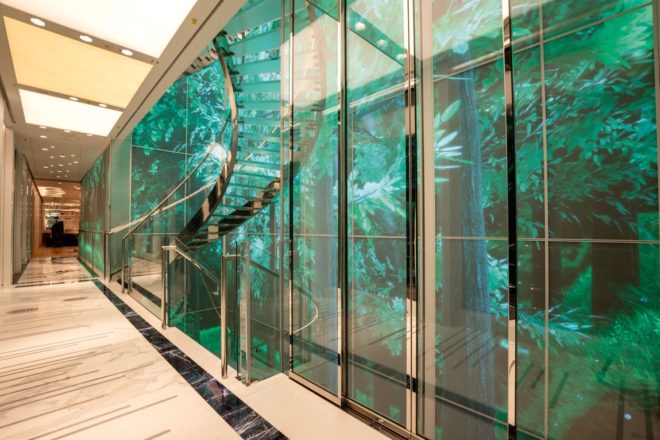 On the lower deck, the lobby has a 370sqm visual panel depicting a moving forest

On the lower deck, a glorious lobby leads to the stairwell and elevator, beyond which are four guest staterooms, while attractions include a spa and private luxury health club, complete with elegant sauna and Turkish bath. With shell doors open, the spa space and gymnasium sit right on the water.

A unique aspect of Luminosity are the visual artworks including a 370sqm visual panel that stretches along the height of the main lobby stairwell. Depicting a moving forest, these images gently sway as guests pass, bringing a dynamic and unexpected vibrancy to the space.

More interactive technology in the main lounge area comes in the form of 264 white magnolia flowers sculpted in Corian resin on the aft wall. In a charming visual greeting, they open and close at varying speeds as a person passes by.

On this deck, the 30sqm swimming pool can transform into a dance floor by raising the pool bottom. 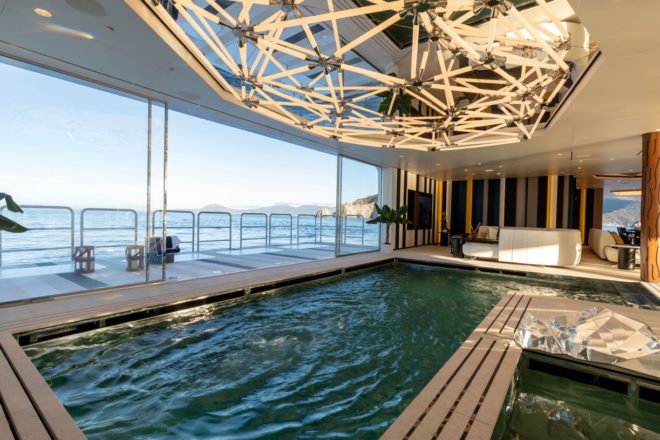 A total of 74 top of the range televisions (70 tv + 4 cinema projectors) are distributed throughout Luminosity as well 10 intelligent mirrors including touch screen with multimedia and internet connection. 5G cables throughout the yacht ensure that systems are future proofed.

Two racks on board the yacht house servers for films and music, while two 3.5m dishes can receive signals anywhere in the world, with fibre-optic cables distributing it throughout the vessel. Where fibre-optic cables are not appropriate to use, another cable called Cat 8 is employed – a cutting edge super-fast connection never used on a yacht of this size before.

The propulsion package includes six generators of about 1,000kW each. The electricity produced by those generators is managed electronically, by an integrated power management system, to feed the services on board and the electric motors of two Azipods of 2,200kW each.

The spare electricity is also used to charge 36 tonnes of batteries, sufficient to run the vessel for 12 hours without generator power, convenient when no shore power is available. 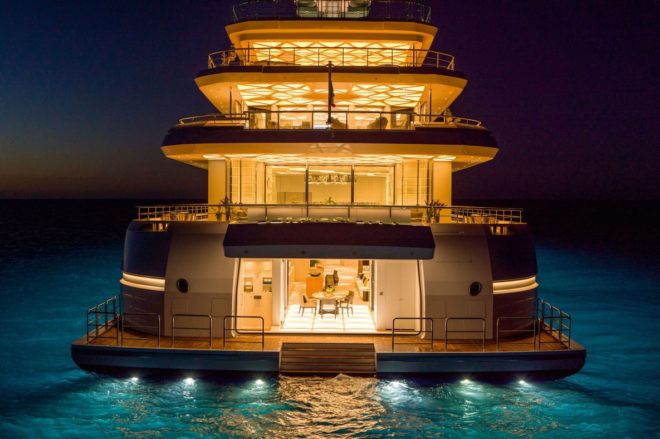 Luminosity is beautifully lit at night, across all six decks

The propulsion package is state-of-the-art and using equipment from the likes of Caterpillar, Seastema and ABB, under the coordination of the Benetti Technical Department. The advantage of this system is a vibration-free navigation in total silence.

The air-conditioning system and chiller units by H&H are one of the biggest-ever installed inside a yacht of this size and provide a cooling capacity of about 3,000kW, while the yacht employs an advanced waste-heat recovery system.

Built to comply with the PYC Code, safety was a priority in the creation on Luminosity, which features fire-proof and fire-retardant materials throughout, and there’s also a medical centre. To further ensure safety, Benetti designers divided the entire crew quarters into vertical sections and ensured each one had a dedicated staircase for emergency escape.