A market for superyachts ranging from 60m to 90m is eyed by Lürssen – a firm renowned for building the world’s largest superyachts for the uber-wealthy.

Lürssen has only built 15 vessels over 90m in the last two decades”, Sales Director Michael Breman told specialist media invited to Germany, including Yacht Style from Asia-Pacific waters. “It’s an occasional business”, he said. “We are known for constructing the world’s largest superyachts, but our core orders are really in the 60-90m range”. The “core business” claim seemed hard to argue, even for this straight-talking son of Dutch diplomats and current President of the Super Yacht Builders Association. If one considers the world’s top half-dozen private yachts, Lürssen either built or had a close association with them. Their 180m Azzam is the longest. Then comes 162.5m Eclipse by Blohm+Voss, now part of Lürssen, and 162m Dubai whose origins stem from B+V and Lürssen and go back to Prince Jefri of Brunei, before a conglomerate called Platinum finished the vessel in the UAE. The latest Dilbar is a Lürssen 156m that has a larger volume than the first three LOA contenders, and then follow two other Lürssens, the 155m Al Said and 147m Topaz. Such projects are monumental in scope compared with yards building 60m+ vessels, of which there are relatively few anyway, and the complexities and time needed are modestly understated in Breman’s amusing throw-away lines like “often we only deliver one to two boats a year”. On this very media tour, which was the first Lürssen has conducted for nine years, we had been looking at project TIS, a 111m at Rendsburg near the Danish border, noted that project Thunder, a 135m yacht, was receiving final touches in Hamburg prior to delivery in July or August, saw the 2017-launched 123m Al Lusail back at Lemwerder in Bremen for some warranty work, and across the Wesser River, contemplated the stupendous 136m Shu just returned from sea trials. And these were by no means the only secrecy-veiled 90m+ private yacht projects underway at Lürssen’s yards in northern Germany. Acknowledging that this line-up appeared to conflict with his “core business” definition a little, Breman did concede that the present period was “quite phenomenal”, but stuck to his guns as far as the 60 to 90m Lürssens are concerned. Statistics do indeed show the yard has built more vessels in this range over the past two decades. We reviewed the 85m Areti in Yacht Style #41, after she made her debut at Monaco Yacht Show last year, and Aurora also delivered in 2017 is 71m. 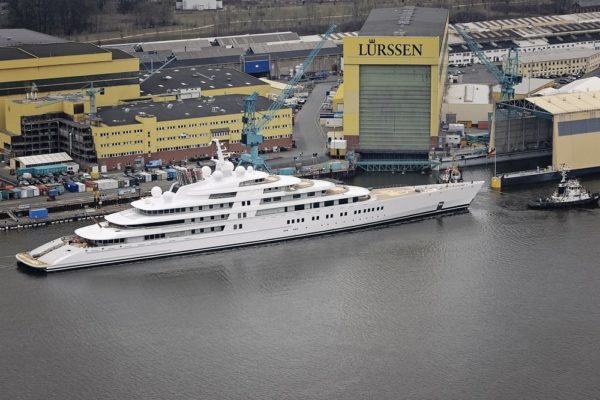 Before that came 91m Lady Lara, 66m Elysian and 85m Solandge, plus 86m Quattroelle, 87m Ace, 62m Lady Kathryn V, 68.5m Hermitage, 85m Valerie, 85m Pacific, 60m Solmates, 60m Arkley, 75m Northern Star, 78m TV, 60m Vive La Vie and 70m Martha Ann, and that is only in the last ten years. Northern Star, Pacific and TV are among Lürssens that have extensively cruised Asia-Pacific waters recently, and 73m Titania chartered here a season ago. Who could forget the likes of Microsoft co-founder Paul Allen’s 126m Lürssen Octopus built in 2003, which has spent so much time in the Pacific and Philippines archipelago. Building a 60m at Lürssen still requires a particular mindset, says Breman, who was seeing potential clients for such a vessel during the tour. “We are bespoke builders and that suggests a premium. Other yards may be cheaper, but our facilities are second to none, and there is nothing quite like owning a Lürssen. “This is a family company with 2,700 employees that believes in reinvesting in itself. Lürssen clients become part of that exclusive family, and their vessels retain a premium value. Lürssen took over Blohm+Voss in 2016, increasing its white boat, naval and commercial shipyards to eight, so the focus of the media get-together was clearly to emphasise its 60-90m capabilities and refit and repair work and to cement a certain rapport. The tour itself involved 24 media people of which I was the only Asia-Pacific invitee. Otherwise, the group reflected Lürssen’s more traditional markets in America, Europe, the Middle East and Russia. People like Kenny Wooton from Yachts International, Marilyn Mower now with Boat International and Rory Jackson of The Superyacht Report spoke about changing times at their titles. Amsterdam-based Merijn de Waard of the online service superyachttimes.com represented part of the new breed. One fascinating invitee was Alex Jiminez, who runs a blog called The Yacht Guy in the States. An unlikely looking lad in the hallowed halls of Hanseatic conservatism, his no-nonsense punchy style has apparently led to some useful contacts, despite being a relative newcomer to the industry. Otherwise, Martin Hager has replaced Marcus Krall at Boote Exclusiv in Hamburg, the latter having become a boat broker with Ocean Independence. Veteran Nabil Farhat continues to run a five-tentacle business that includes his London, Beirut and Dubai-based World of Yachts and Boats, while Australian Steve Chalmers is editing Yachts Middle East amalgamated from Luxmedia’s former Yachts Emirates, Yachts Qatar and Yachts Lebanon, and a new entrant here is the impressively deep-voiced, BBC-sounding Nicolas Shammas, who turned out to hail from Bespoke of Beirut. any of this group had taken part in annual Holland Yachting Industry media tours, and were reassured that diminutive Dmitry Kislev, now with Yachting Russia, is still mixing the most potent vodka cocktails on the planet. 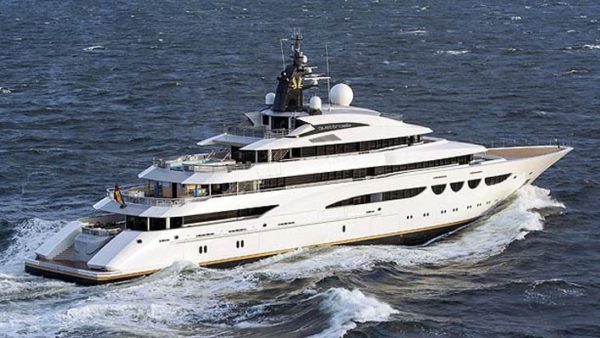 What to do with such an assembly if all your builds are under strict client confidentiality contracts? Helmed by Lürssen’s Sylke auf dem Graben, Julia Kari and Tamara Gramberg, we gathered in Hamburg to visit four of Lürssen’s composite yards. The pre-tour brief was that Lürssen, “the leading shipyard for large luxury yacht building, was founded in 1875, and has been cultivating refined skills and advanced technologies to create truly outstanding vessels ever since”. “The connection to shipbuilding is as deep-rooted and individual as only family bonds can be. The commitment is deep, the approach is individual. When the company founder Friedrich Lürssen said, ‘Leading in quality and performance, that should be my company’s reputation’, he was expressing the values Lürssen continues to uphold to this day”.

A two-hour drive north to Rendsburg, near Denmark, introduced a yard which concentrates on building yachts from 60 to 111m. The latter is called Project TIS, a quintessential vessel scheduled for delivery in winter 2018, with exteriors and interiors by Winch Design. With her long and well-balanced sheerline, TIS is a supremely elegant yacht, notwithstanding her considerable size. She has a beam of 16.85m, and boasts extraordinary volumes to accommodate all of the owner’s requirements. TIS features six decks and offers a spacious interior and exterior areas for guests, making her suitable for entertaining on a grand scale. The sweeping staircases at the transom create an impressive entrance, which sets the tone for the rest of this palatial yacht, with very generous ceiling heights and sophisticated interior decoration. There were several other yachts in various phases of engineering at this location, which we had not visited before, so the yard seems assured of a healthy order book for some time to come. One further stop, back in Hamburg late afternoon, was at the enormous refit and repair facility of Blohm+Voss, which looms large across the Elbe River at its confluence with the Alster from the city CBD. Questions were asked at this briefing as to whether Blohm+Voss would build yachts under its own name again, and the answer was an emphatic no. B+V, whose roots go back to 1877, will be a key refit and repair centre of the Lürssen Group, together with Rendsburg and Bremen. Refit work in Hamburg had already doubled since the 2016 takeover. During the last year, more than a dozen yachts of 50m-100m+ had used Lürssen facilities for modifications and maintenance works. Eight of them were located at Blohm+Voss Hamburg. Amongst these were some of the world’s most beautiful yachts, such as Lady Moura, Yas, Rising Sun and Alfa Nero.

“Regardless of whether a yacht is a Lürssen or built by another yard”, said a spokeswoman, “a time will come when it will need a refit, some repair, or even a conversion. This is work that Lürssen undertakes with the German precision for which they are world-renowned”.

“And although the work required may differ from ship to ship, the aim is always the same. Once Lürssen has been involved, the yacht’s life expectancy and performance will again be comparable to that of a new build, and its value will be enhanced”.

“We have ample space to build and refit multiple yachts at the same time in covered sheds and drydocks. Lürssen also has the manpower of 700+ engineers and naval architects, and a multitude of craftsmen, to tackle any project – be it a new build, a refit or a conversion”.

So to the grand finale in Bremen, the spiritual home of Lürssen, where there are three shipyards on both sides of the River Weser. Here the yard’s traditional colours prevail, and the deep affection executives feel for the place is almost palpable. On the north side of the river, at the facility known as Lürssen- Aumund, there is a large graving dock, where yachts of up to 170m can be built. Adjacent to that lies a floating dry dock with a length of 220m, which allows even larger yachts to be built and to properly look after its rapidly expanding fleet. Lürssen thinks that it is important that its “children” come “home” during their lifetime for some R and R, said the spokeswoman. Both in the floating dock and in the graving dock were two very large yachts currently well underway, while at the pier, the 136m Shu was undergoing her final outfitting and being readied for delivery, following successful final sea trials in the North Sea. This is planned for autumn. 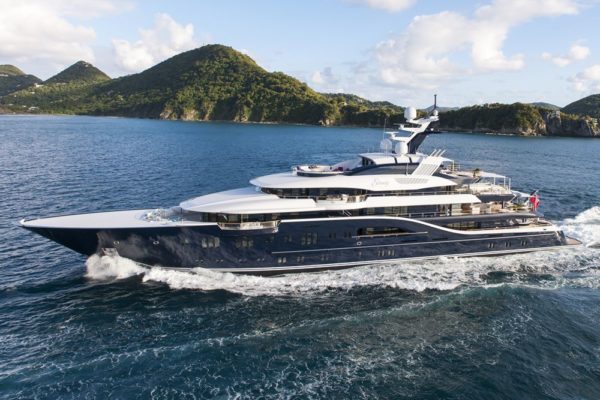 Designer Espen Øino has given Shu elegant and graceful exterior lines whilst ensuring, despite her massive volume, that she maintains her striking looks. The balance and proportion of the exterior profile allow for generous deck space that offers a range of options for owners and guests, from sun-exposed and open entertainment areas to more shaded and intimate spaces. A special feature is the enormous swimming pool, which runs transversely on the main deck aft. The exterior also boasts two helicopter landing pads, one on the bridge deck and another on the sun deck aft, allowing for multiple helicopter use. Other highlights of her profile include the sea terraces and aft platforms, which enable guests to access the water easily for water sports activities as well as relaxation. Mark Berryman has created an interior that is nothing short of spectacular. Shu has a calm and spacious feel which has been beautifully crafted with the use of soft neutral tones and tactile finishes. On the south side of the river, Lürssen’s main facility is known as Lürssen-Lemwerder. At present, there is another 100m+ yacht under construction, and the blocks are coming together in the building shed. At the pier was the 123m Al Lusail, delivered in 2017 and returned for some guaranteed work. The third yard is downriver of the first two and is located in Berne. Here pre-assembly of steel blocks takes place. Other yards shown in the map primarily handle naval and commercial commitments.