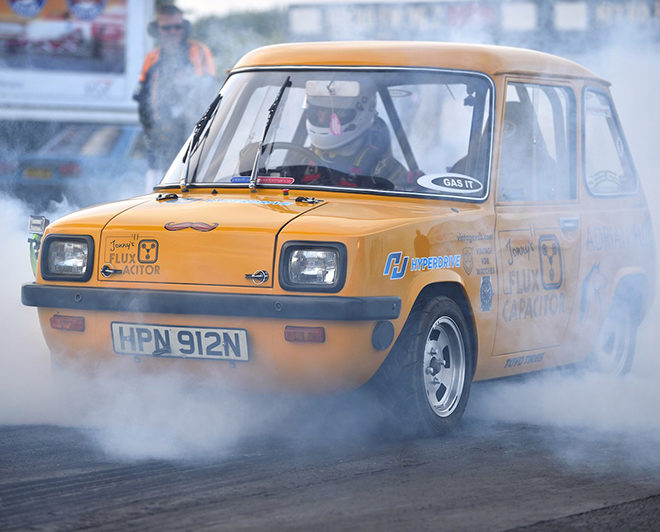 A ‘restomod’ Enfield 8000 is apparently faster than a Bugatti Veyron, Lamborghini Aventador, Mclaren 675LT, Porsche 911 Turbo S, Ferrari 488, a Tesla Model S and the latest generation Honda Acura NSX. Yes, all these legends are slower in a drag race than a modified yet road legal electric car from the early 1970s.

That’s right, the “Flux Capacitor,” so-named by its owner, car journalist Jonny Smith, has just set a new world record for the fastest, road-legal plug-in electric car on a drag strip. It covered the standing quarter mile in just 9.86 seconds, accelerating from 0 to 113mph in six seconds and managing an average speed of 121mph over the course.

In June a team of students at ETH Zurich and Hochschule Luzern universities in Switzerland managed to get their high-tech electric prototype, the “Grimsel” to go from 0 to 60mph in 1.513 seconds, making it the fastest accelerating EV in history. But unlike the track-only Grimsel, the Flux Capacitor has doors, lights, a roof and meets regulations for highway use. In fact, to qualify to race, it first had to cover 26 miles on normal roads.

“I’m in awe of what this little yellow thing can cope with,” said Smith. “Despite so many racers telling me that a 68-inch wheelbase car could never safely go as fast as we wanted, the Enfield has proved them wrong.”

Under the skin, the Flux Capacitor differs from an original specification Enfield 8000. It uses lithium ion batteries from a Bell Super Cobra attack helicopter and two DC 9-inch motors power the rear wheels. These upgrades mean the car delivers 800bhp and 1,200lb-ft of torque. Yet, the car’s exterior is just as it was in 1973 when it first rolled off the production line.

“Originally the car was designed to drive up to speeds of 40mph. Now it triples the speed within quarter of a mile without any aerodynamic alterations — which is testament to the original design,” said Smith.

Enfield was a pioneering electric car company based in the UK that history forgot. Built using tubular steel and aluminum, like modern sportscars, the tiny vehicles used lead-acid batteries and could cover roughly 50-90 miles (80-145km) on a charge. Nevertheless they promised an alternative to gasoline during the oil-scarce early 1970s.  Interest was such that when one was shipped to the US for an electric vehicles symposium, then Governor Ronald Reagan was so excited by the Enfield that he wanted to build them in California.

But the problem was the cars cost too much and by 1976, after just over 100 working examples, the company and its cars were no more.

“I set out to build a British electric hot rod. I hope I’ve achieved something leftfield enough to prove that David certainly can beat Goliath,” said Smith.