Inspired by a historical timepiece from its museum collection, the brand releases a new iteration of its Three Gold Bridges watch — the Esmeralda Tourbillon 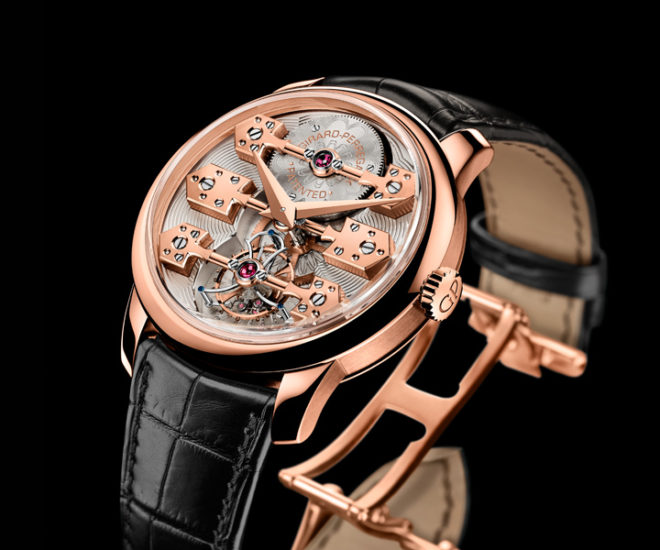 First introduced in 1860, the Three Gold Bridges is Girard-Perregaux’s calling card. Aesthetically, there’s nothing else like it; less a specific movement or even a family of it, the Three Gold Bridges is better described as a design concept: three parallel bridges with arrow-shaped ends, in gold no less, anchoring a movement’s layout. This presents a technical challenge, as the components must also be arranged linearly, which brings the watchmaker’s movement design expertise into play.

Girard-Perregaux has created several iconic watches with the Three Gold Bridges over the years, including a pocket chronometer dubbed “La Esmeralda”, which won a gold medal at the Exposition Universelle of 1889 held in Paris. Ornately decorated with engravings on its case, La Esmeralda’s movement used the Three Gold Bridges layout, had a pivoted detent escapement for great accuracy, and also a tourbillon to iron out positional errors. The watch was reacquired by the manufacture in 1970, and it is now a part of the Girard-Perregaux Museum’s collection. The new Esmeralda Tourbillon here is a reinterpretation of the timepiece, this time in a wristwatch format.

Besides moving from the pocket to the wrist, the new Esmeralda Tourbillon has its Three Gold Bridges on the dial side of the movement. The bridges here support the barrel, motion work, and tourbillon, and exhibit a variety of finishes from mirror polished top surfaces to drawn flanks and hand chamfered edges. This ability of components to be both functional and decorative is echoed elsewhere on the dial. Note the tourbillon, for instance. It spins the escapement, but does so with a lyre-shaped cage – a Girard-Perregaux signature that’s a welcome departure from typical three-arm designs. In the same vein of things, the oscillating weight here is a micro rotor positioned co-axially underneath the barrel. This rearrangement allows the barrel itself to be upsized to extend the power reserve by 25 per cent to 60 hours.