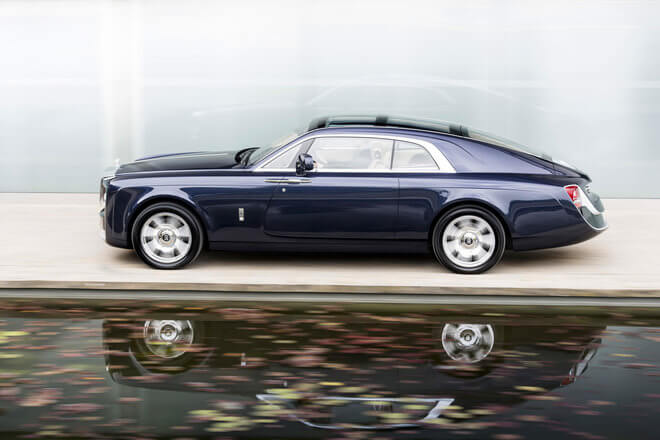 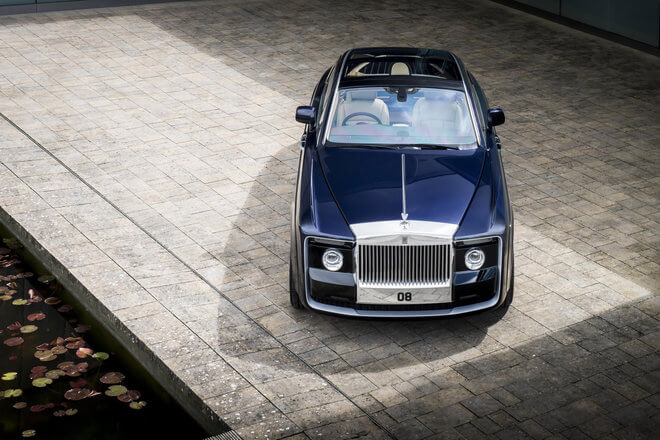 With the unveiling of the Sweptail, Rolls-Royce has redefined the automotive notion of bespoke and has thrown down the gauntlet to every carmaker that claims to offer super luxury vehicles. “We don’t think it’s right to profess to do it [bespoke services] unless you’re prepared to go through the journey to really make that happen,” explains James Warren. “Many others pay lip service to it. But to us, bespoke is so much more than stitching. It’s why we get quite sensitive about others’ notion of bespoke.”

As Rolls-Royce’s head of communications for Western Europe, Warren has had an extremely busy week. Since the totally bespoke car was unveiled during the closing stages of the Villa D’Este concours d’elegance last weekend, he has been hounded by the press wanting to know more and more—from the identity of the commissioning client, to the car’s price tag and whether or not the Sweptail marks the first of many utterly unique commissions destined to roll out of the Goodwood facility in the coming months.

The official answer to the final question is, according to company CEO, Torsten Müller-Ötvös: “We are listening carefully to our most special customers and assessing their interest in investing in similar, completely exclusive coachbuilt masterpieces.” But the unofficial answer is get ready for brand new cars to start upstaging coachbuilt classics at the world’s most important concours events on a regular basis.

As for price, the Sweptail is comfortably the most expensive modern car on the road with an estimated cost of $10 million, but that could seem like a bargain for a car that is truly unique and representative purely of its commissioning owner in every single way—from the curved panoramic glass hatchback and hand-formed aluminum boattail, to the carbon fiber and leather attaché cases that deploy from hidden drawers inside the doors. Even the numberplates, front and rear are integral to the exterior, formed and hand polished from solid aluminum.

“Sweptail is the automotive equivalent of Haute Couture,” said Giles Taylor, Rolls-Royce’s Director of Design. “It is a Rolls-Royce designed and hand-tailored to fit a specific customer.”

From initial discussion to finished automotive monument took four whole years and, according to Warren, an “incalculable number” of man hours. “It takes 60 people 400 hours to build a Rolls-Royce Ghost. But each of our 1700 skilled artisans have in some way influenced this car along the way.”

But crucially, at the end of the commissioning journey, the car is still unquestionably a Rolls-Royce. “The car is singular and of that customer, but it is within [our] design tenants,” said Warren. “It shows what happens when you get the balance absolutely right.”

This is something a host of other companies dedicated to aftermarket bespoke customization are unable to achieve. For example, for all of its carbon fiber expertise, a Mansory customized Rolls-Royce is a Mansory first, and a Rolls-Royce second. And often these creations are so far removed from the original car that they’re no longer able to sport the original company’s badge. But the car is also a line in the sand to those that see themselves as Rolls-Royce’s direct competitors, many of whom until now have been focusing on unique paint finishes or interior materials.

Bentley, for instance, has a phenomenal bespoke customization department in Mulliner with its latest unique undertaking a Falconry kit for the Bentley Bentayga.

Nevertheless, the demand for personalization within the highest echelons of the car market, has never been greater. For the first time in its history, every single Rolls-Royce built over the course of 2016 featured at least one bespoke element, as did every Ferrari sold. However, car companies should be able to facilitate these growing demands with ease as the typical Rolls-Royce client is used to commissioning, be it a piece of art, a yacht, a home or a plane. In other words, they expect something that “Goes beyond a transactional experience,” explains Warren. And with the Sweptail, the company has shown that it is the only major carmaker able to offer such a service. For now, at least.