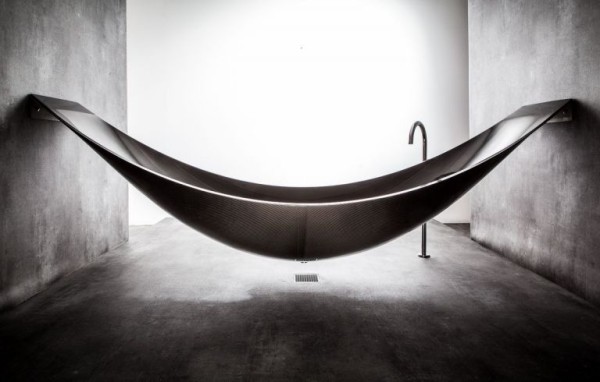 The hammock-shaped bath tub, called Vessel, is designed for use in a wetroom and does not touch the floor but rather is suspended from the walls with stainless steel brackets.

The carbon fiber bath, which was released mid-June, measures 2.7 meters long and is available in black, red, blue, yellow, pink, bronze and silver.

Vessel can be filled using a floor-standing tap and the waste water is released through the base into the wetroom, though a downward drain pipe can be added if the bath is not installed in a wetroom.

Miles Hartwell, co-founder of Splinter Works describes the idea behind the design of Vessel: “Struck by the synergy between the shapes of two compelling symbols of relaxation, a hammock and a bath tub, we were inspired to develop a piece that would provide the ultimate vehicle for total escapism.”

Vessel, which is being produced in a very limited run of 12, costs £22,500 ($33, 260) + VAT if applicable). Vessel is available directly from Splinter Works in the UK and can be shipped worldwide.