Art Republik takes to the streets with Mr Brainwash. 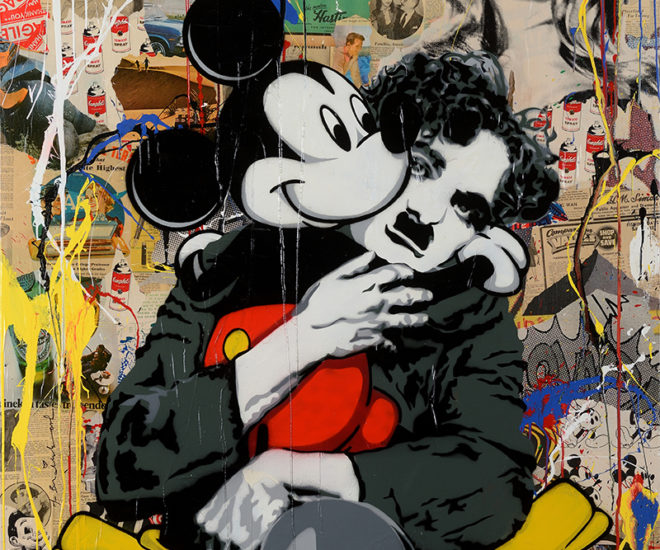 “Art has no walls. Anybody can be an artist,” says Mr Brainwash (often written MBW). Indeed, the rise of this prominent street artist has shown us that anything is possible in the art world. Mr Brainwash, a pseudonym for Thierry Guetta, is known for appropriating copyrighted images from history, popular culture, and art history in his large-scale artworks. This provocative figure subtly alters the pictures or its contexts to undermine or subvert the tone of the original source material.

He rose to fame as the star of Banksy’s Oscar-nominated documentary ‘Exit Through The Gift Shop’ – a film that created controversy in the world of street art. The film follows the life of the then Thierry Guetta, French-born owner of a vintage clothes shop in Los Angeles, who had an obsessive hobby for filming. After being introduced to street art by his cousin, the street artist Invader, Guetta filmed street artists through the 2000s, realising a documentary detailing the street art culture in LA. Since the release of the film, there has been much speculation that the film and story of Mr Brainwash are a hoax concocted by Banksy and Shepard Fairey. However, Banksy later confirmed that this film was authentic.

Guetta went to great lengths to compile footage exploring the street art culture. He met with other graffitist in the scene, and inspired by the matter, began laying his own stencils and posters on the streets of LA and Paris, and adopted his pseudonym name. Little did he know that he would be an overnight success, selling his works at international art shows for five-figure sums and causing a buzz in the international art market.

His artistic style incorporates historic pop imagery and contemporary cultural iconography to create his version of a pop/graffiti art hybrid. He adopts layers of screen print and stencilled images to create his playful and nuanced compositions, juxtaposing images with those of cultural icons like Einstein, Charlie Chaplin and Madonna, to name a few. All of his artworks are authenticated with Mr Brainwash’s trademark mantra ‘Life is Beautiful’, his thumbprint, hand-signature, and assigned dollar bill number sequence. Mr Brainwash’s first solo show titled ‘Life is Beautiful’ opened in June 2008, in the legendary CBS Studio in Los Angeles and was met with great success and recognition in the art market. Following this critical success, pop singer Madonna commissioned the artist to design the cover art for her ‘Celebration’ album.

In 2010, the artist displayed his works in a 1,400m² exhibition titled ‘Icons’, which took place in the heart of the meatpacking district in New York. He used broken records, recycled items and portraits to create his compositions, paying tribute to iconic artists of the past and present. At an auction that year, Mr Brainwash sold a painting depicting Charlie Chaplin as a street artist with a paint can and roller in hand, with Madonna’s portrait in the background. This large canvas was given a pre-auction value of about $50,000-70,000. One of his larger painting, showing Albert Einstein in front of the graffiti adorned wall holding a sign reading ‘Love is the answer’, sold for about $120,000, almost three times their estimates. He also repeats and mixes his stock characters; for example he couples Charlie Chaplin with Mickey mouse in his work ‘Chaplin & Mickey’.

His works from his ‘Life is Beautiful’ collection is rooted in pop art. His critical and commercial success puts him in league with other notable street artists of this generation. However, while he is often compared to the liked of Warhol and Banksy, Mr Brainwash’s compositions possess a unique character that he has carved for himself.