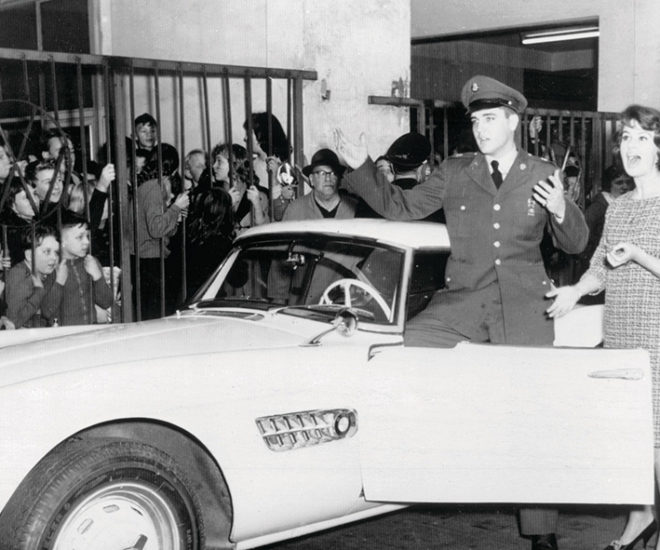 He is best known as the King of Rock n Roll, thanks to his many hits but many also knew Elvis Presley as a lover of cars. This year, The King’s 1957 BMW 507 Series I Roadster will head to Pebble Beach Concours d’Elegance as part of BMW’s Centennial Display. Fans of the car and the musician will be able to see it unveiled August 21 at Pebble Beach along with other classic BMW creations.

He may have had many first loves but his heart always belonged to the 3.3-liter V8 –powered roadster that was designed by Albert Graf Goertz. Having fallen head-over-heels for the car when he first saw it at the Autodrome de Linas-Montlhéry in France as it raced, the singer then purchased it in December 1958. Completed in feather white, the car stood out, which led to ardent fans covering the car in phone numbers, lipstick kisses and pledges of devotion.

The singer countered this problem by repainting it bright red — not a subtle shade but it certainly hid those stubborn lipstick stains. Though he sold it in the early 1960s, the car was made popular Stateside thanks to the music legend. With only 254 BMW 507 Series I built, the car commands a high price even without having been owned by ‘The King’.

After coming into possession of the car two years ago, BMW Group Classic started on a ground up restoration of it. The facelift even saw car restored to its original shade of feather white. The car will appear alongside other classics by BMW such as two of its Art Cars, which are basically standard BMW’s painted by artists Alexander Calder and Jeff Koons.