Taking inspiration from the MA-1 bomber jacket instead of a cockpit this time, Bell & Ross releases their sexiest BR03 pilot’s watch yet. 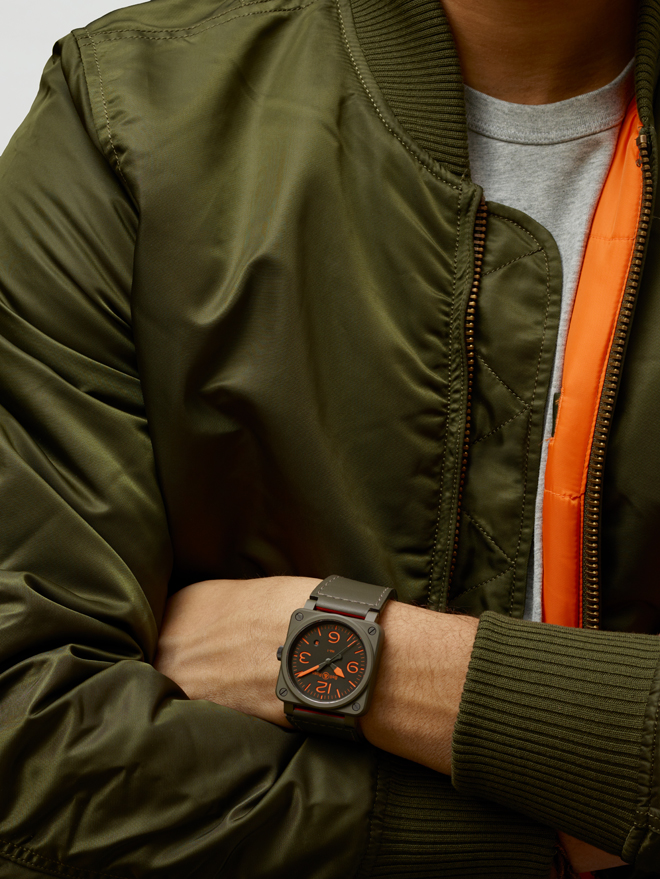 Looking beyond their usual muse, cockpit instrumentation; the new Bell & Ross BR03-92 MA-1 takes its latest inspiration from one of the US Air Force’s most iconic of pilot apparel, the MA-1 flight jacket.

Originally created for pilots, the MA-1 flight jacket, from where the new Bell & Ross BR03-92 wristwatch takes its namesake and suffix, entered into civilian fashion usage somewhere in the mid 60s and early 70s – during that era of counter-culture and teenage rebellion thanks to flight jackets its popularity with scooterboys and skinheads. That said, it was the 80s when baseball adopted the flight jacket into a variety of team colours that the fashion trend really took off across the civilian population 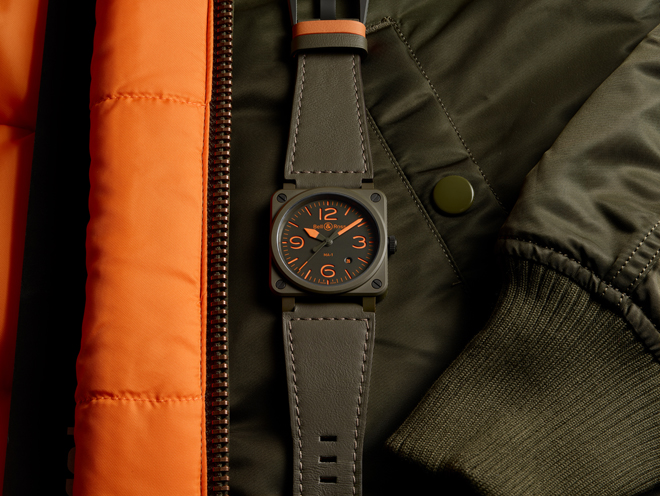 Since 2005, Bell & Ross has been unequivocal about their passion for aviation and high altitude performance. Most notably, their iconic BR03 case and its highly legible, high contrast design language which focuses on communicating the most essential elements. Square, utilitarian, rugged, it was only a matter of time before a flight garment inspired the Bell & Ross BR03-92 MA-1.

Every bit as essential as cockpit instruments, the MA-1 flight jacket coincided with the requirements of the Jet Age in the 1950s when pilots no longer bailed out of aircraft but rather, ejected during an emergency. This meant that bomber jacket first developed in 1958 by Dobbs Industries was designed to overcome many of the challenges which plagued earlier editions of the bomber jacket. 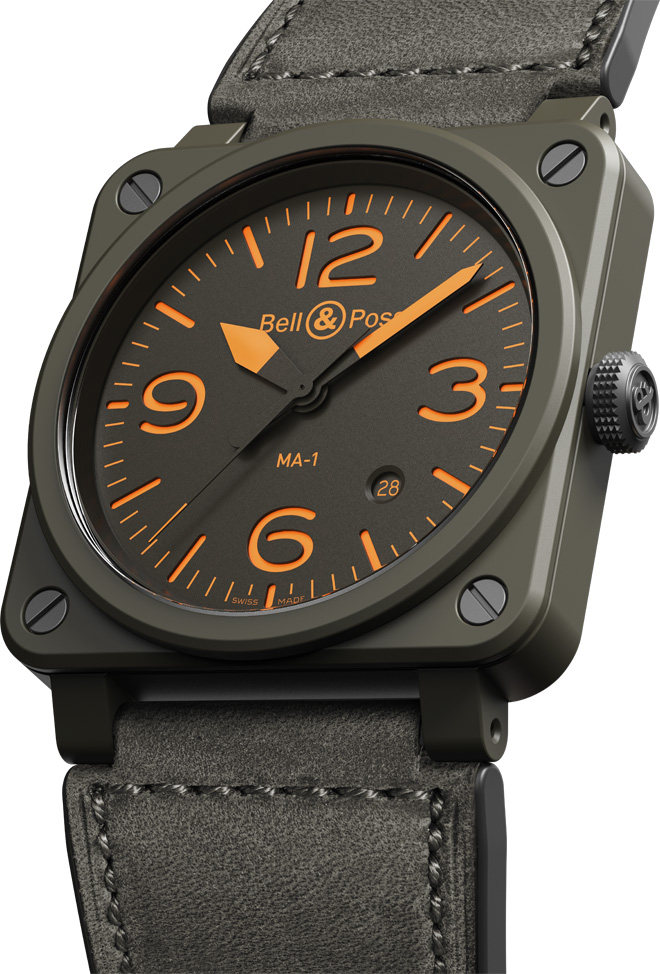 Bulky shearling of fleece lined jackets would soak up the inspiration and literally freeze at the higher altitudes which modern jets could now achieve. Ever decreasing cockpit space and the addition of new computerised instrumentation also meant tighter and tighter spaces which old school bomber jackets were ill equipped to navigate, eventually, the sleek, lightweight yet warm jacket MA-1 was designed as the next generation of bomber jackets. The iconic jacket was made available in olive green with a bright orange lining, meant to be reversed inside out, when a pilot was in distress and requiring rescue either from the dark seas or from the ground. Hence the new BR03-92 MA-1 draws its colour palette from this high contrast aesthetic. 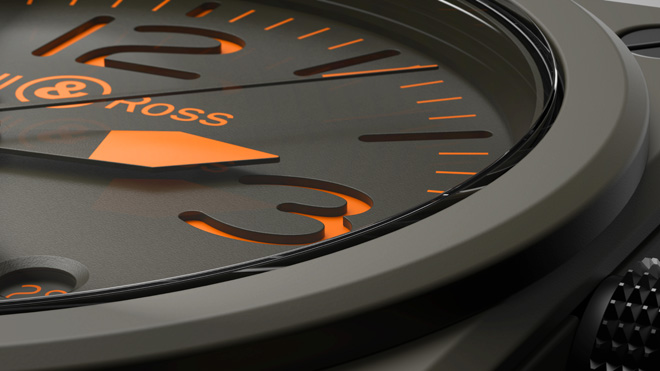 In terms of design language, it’s undeniably chic. The new BR 03-92 MA-1 takes Bell & Ross’ purest pilot watch icon and makes it purer still, thanks to its streamlined approach. All distractions are stripped away, leaving only the dark-khaki ceramic case with sandwich dial stenciled to reveal the orange luminescent beneath. Icing on cake, the new Bell & Ross BR 03-92 MA-1 also comes with a reversible khaki/orange calfskin strap, a first for the brand, and a nice geeky nod to military buffs who are familiar with the versatility of the MA-1 bomber jacket. 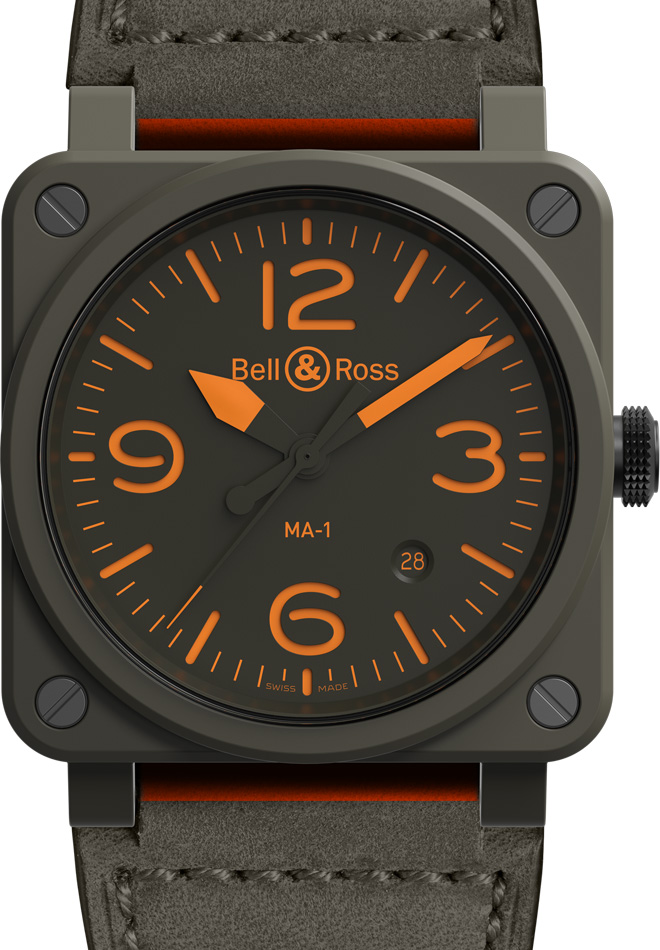 Functionally speaking, the limited edition Bell & Ross BR 03-92 MA-1 shares a lot with its fashion inspiration. Robust thanks to its lightweight, scratchproof ceramic, highly legible thanks to the khaki coloration which serves as a sombre backdrop to the stenciled-out orange numerals – lavishly caked with luminescent for perfect legibility during night flights.