Kaia and Presley Gerber are the new faces of OMEGA

At its new exhibition in Paris, OMEGA announced that the Gerber siblings are following in the footsteps of their mother Cindy Crawford, who has been an Omega ambassador since 1995. It looks like some things do run in the family. Mirroring her 18-year-old brother Presley, Kaia Gerber has steadily been making a name for herself as a model, walking down the catwalks for the Spring/Summer 2018 shows of New York, London and Milan. It helps that their mother is none other than Cindy Crawford, one of the reigning supermodels of the 1990s. Along with her older brother, the 16-year-old is now following in her mother’s footsteps once again — this time, as the new brand ambassador for OMEGA.

Cindy Crawford became OMEGA’s very first ambassador in 1995. With her newfound role, she had contributed ideas for a new Constellation collection and was instrumental to the line’s relaunch that same year. More recently, Crawford brought Kaia along with her on a trip to Peru to film a documentary about the Orbis International Flying Eye Hospital for OMEGA. 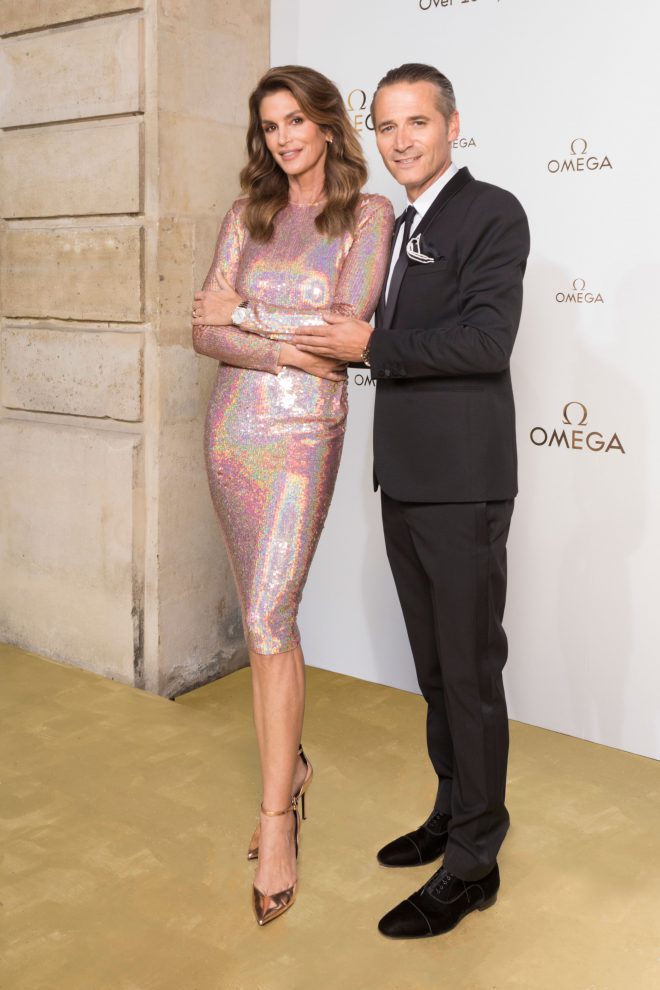 Sticking to tradition, the Gerber siblings will now represent the Swiss luxury watch brand worldwide, just as their mother had for over 20 years. This year, Presley and Kaia took time off during their busy Paris Fashion Week schedules to attend the opening night of OMEGA’s “Her Time” exhibition at the historic Hôtel de Sully.

The exhibition celebrates the brand’s history of exquisite women’s timepieces, displaying everything from early Lèpine pendants and the iconic Ladymatic to “secret jewellery watches” and today’s latest creations. The evening was hosted by French actress Pauline Lefevre and graced by guests such as models Joan Smalls and Martha Hunt, actresses Cinta Kiehl and Gwendoline Hamon, and fashion designer Nathalie Rykiel.

The Gerber siblings made the evening a family affair by showing up together with their parents. A special family portrait taken by renowned photographer Peter Lindbergh was later unveiled, officially marking the siblings’ new connection with the OMEGA family. Crawford herself is only too happy to share her OMEGA journey with her children, saying, “My journey with OMEGA has been incredible and I know that Kaia and Presley will enjoy working with the brand as much as I have. They are both talented in their own unique ways and I’m so proud that they will be the next ambassadors for these fantastic watches.”

OMEGA’s President and CEO, Raynald Aeschlimann, added, “Kaia and Presley represent the next generation of watch wearers. They are good looking, motivated, inspirational and full of energy. It’s incredible to have such a passionate family tradition within our brand and I’m so excited to begin working with theses two young people.”