Bulgari has applied the Ultranero treatment to the Octo collection this year,  with the Solotempo model available in two variants. 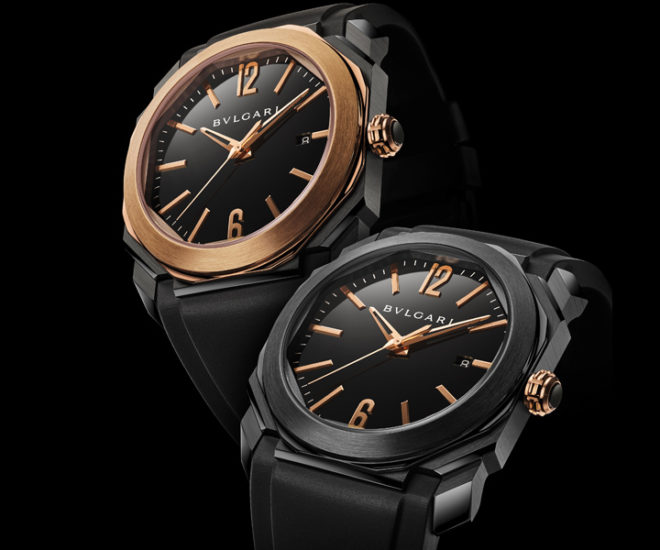 When it comes to case materials, luxury watches have long defaulted to metals. The usual suspects range from steel to platinum, with the different shades of gold falling between them. Naturally, cases used to display just these metallic hues. Black, as a color (for watch cases), is a recent innovation, whether via DLC and other coatings, or materials that are inherently black, like carbon composite. The color’s neutrality makes it very, very versatile. Looking to tone down a timepiece’s bling factor? Black is the answer. Need to emphasize another’s technical slant? Make its case surfaces black. Want a touch of mystery? Black will do just that too. The color expresses many diverse qualities, depending on the specific watch’s design. And, as the Octo Ultranero Solotempo shows, much also hinges on the extent of its application.

The Ultranero isn’t a collection per se, but a label Bulgari applies to existing watches that are clad in black. Previously, the only Octo watch with such a treatment was a special edition timepiece commemorating the brand’s partnership with the All Blacks rugby team. Bulgari has, however, released three Ultranero watches in the Octo collection this year, including the time-only Solotempo that’s available in two references. One sports a DLC-coated bezel that blends in with the case, while the other has a pink gold bezel that pops out from it instead. The difference is significant, to say the least. The all-black version exudes a decidedly understated vibe, as the usage of pink gold is limited to accents on its dial and crown. Its sibling, on the other hand, looks far more luxurious, both because a larger proportion of its surfaces are in pink gold, and because the bezel frames the dial with that contrasting material.

Differences in bezel material (and luxe factor) aside, the two references are otherwise identical – to each other, and to the Solotempo they are based on. The angular, faceted Octo case retains its sporty sensibility here while acquiring an added dimension of seriousness thanks to its new color. This is further enhanced by a rubber strap fitted with a buckle that’s also in DLC-coated steel. Finally, Bulgari’s self-winding BVL 193 calibre remains – a no-nonsense automatic calibre with a going time of 50 hours.