Gemma Ward, who had previously been on a six year hiatus from modeling, stars in Prada’s spring 2015 campaign, shot by Steven Meisel. 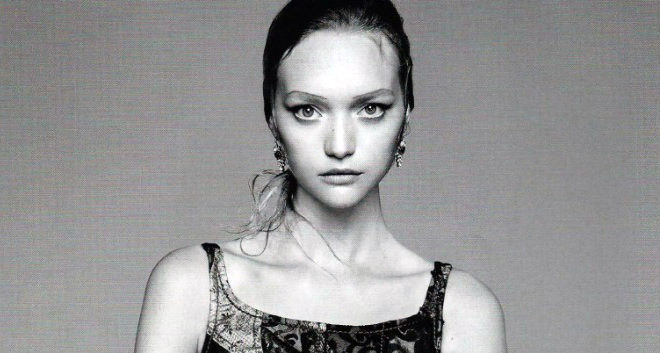 After her surprise appearance on the PRADA runway in September, Gemma Ward has landed a spot in the Italian fashion house’s latest campaign.

The Australian model, who had previously been on a six-year hiatus, stars in the black and white spring 2015 campaign, shot by Steven Meisel. Control and relaxation were the two opposites played out in the new Prada images. Australian model Gemma Ward is one of the faces, alongside countrywoman Julia Nobis and rising Belgian star Ine Neefs, each one of them shot in a different mood against a pastel graffiti backdrop. The black and white and color works show off the Spring/Summer 2015 collection’s different materials, from an 1800s-style antique brocade through to the finishes of the 1960s, while the season’s bags are both clutched onto protectively and thrown carelessly on the bed.

The campaign comes a decade after Ward’s first campaign for the luxury label, when she was aged just 17 in 2004. The 27-year-old, who was one of the last decade’s most bankable faces, also chose Prada for her runway return, opening the Milanese brand’s show in the Italian fashion capital last September.