Jonathan Anderson appears to have taken inspiration from his capsule Eye/Loewe/Nature collection for the brand’s Fall Winter Menswear 2019, a concoction of hype meets haute. 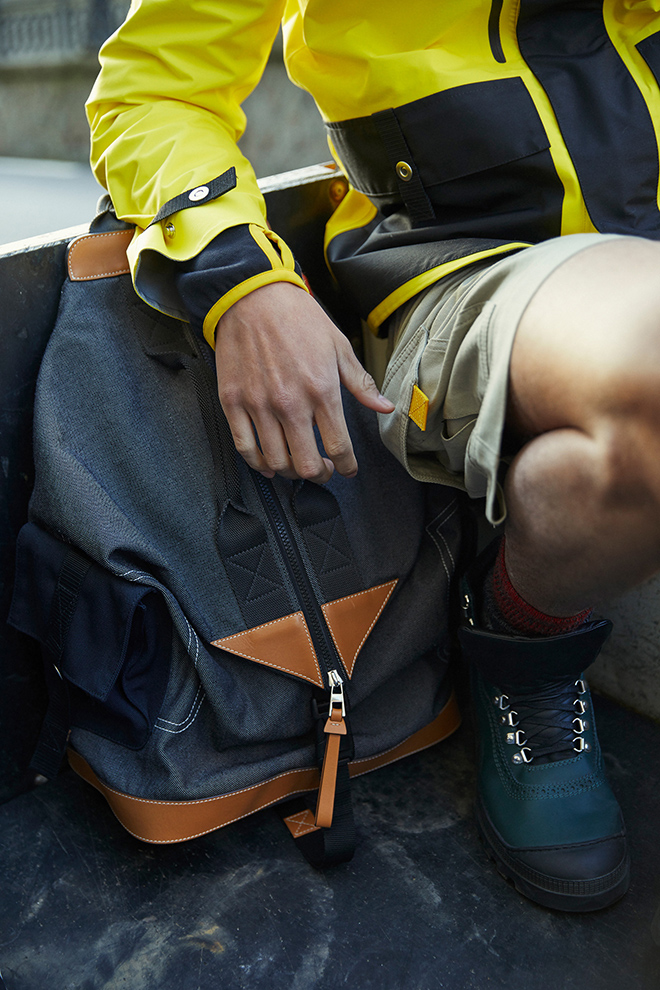 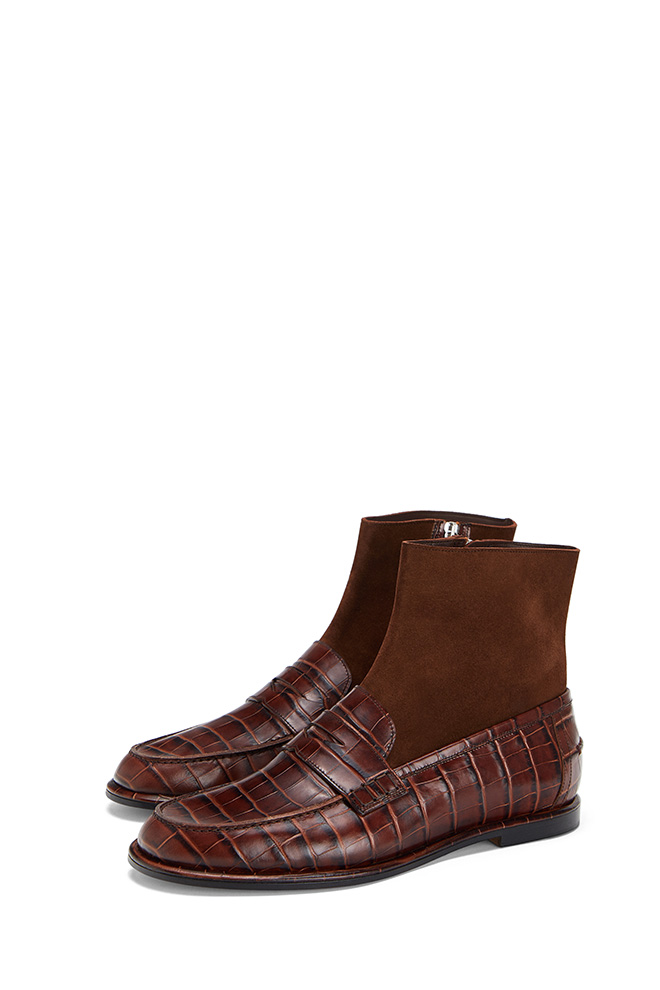 Whenever a high fashion designer joins a prolific legacy leather maker or when the leather brand itself makes a foray into couture, there’s a tendency for both profiles to be lost in the mix, especially when consumers today have shorter and shorter memories. Not Loewe apparently.

Since Jonathan Anderson joined as Loewe’s Creative Director in 2013, Spanish brand founded in 1846 in Madrid by a group of Spaniard leather craftsmen, has gone from strength to strength. In January 2019, he best encapsulated the brand’s founding ethos as a satchels and saddlebags, pairing it with contemporary street appeal in the Eye/Loewe/Nature collection. 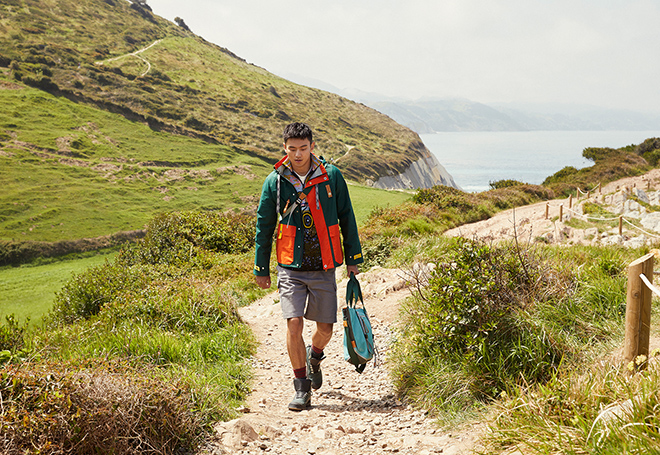 As one of the faces of Eye/LOEWE/Nature Autumn Winter 2019, Ning Zetao is captured taking the collection for a test run on the rocky crags and grassy overlooks surrounding the Basque city San Sebastián and the beaches of Zumaia, on Spain’s north coast

British actor Russell Tovey and Chinese Olympian Ning Zetao are captured in the great outdoors, either walking the rocky shores of England’s Botany Bay or traipsing the scenic Basque coast – taking archetypes of utilitarian garments and reinterpreting them with vibrant colourways and prints, while re-introducing leather elements which speak to the leather heritage of Loewe. From waterproof parkas in blaze orange to convertible messenger bags, Anderson conceived of the Eye/Loewe/Nature as not just a love letter to nature but to his “less than fashion-inclined” brother. “I wanted him to be able to walk into a store and find something he like,” said Anderson. 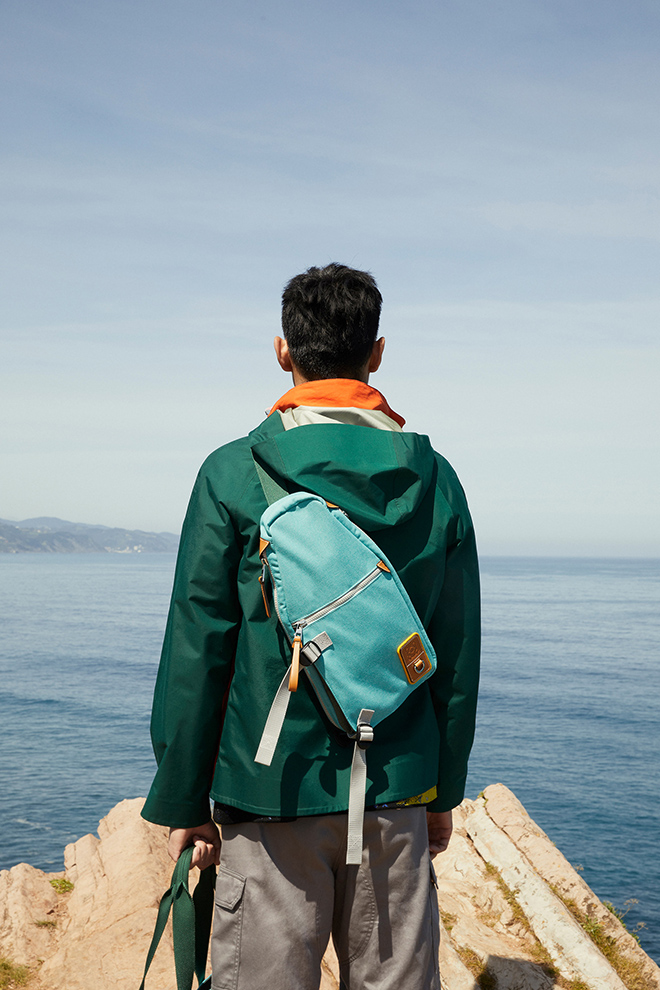 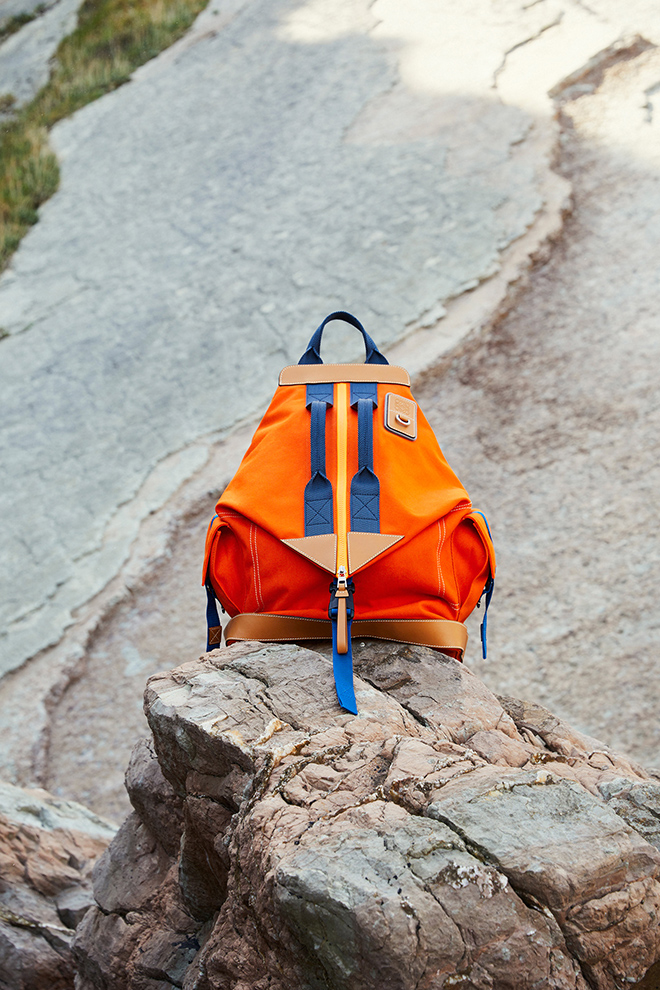 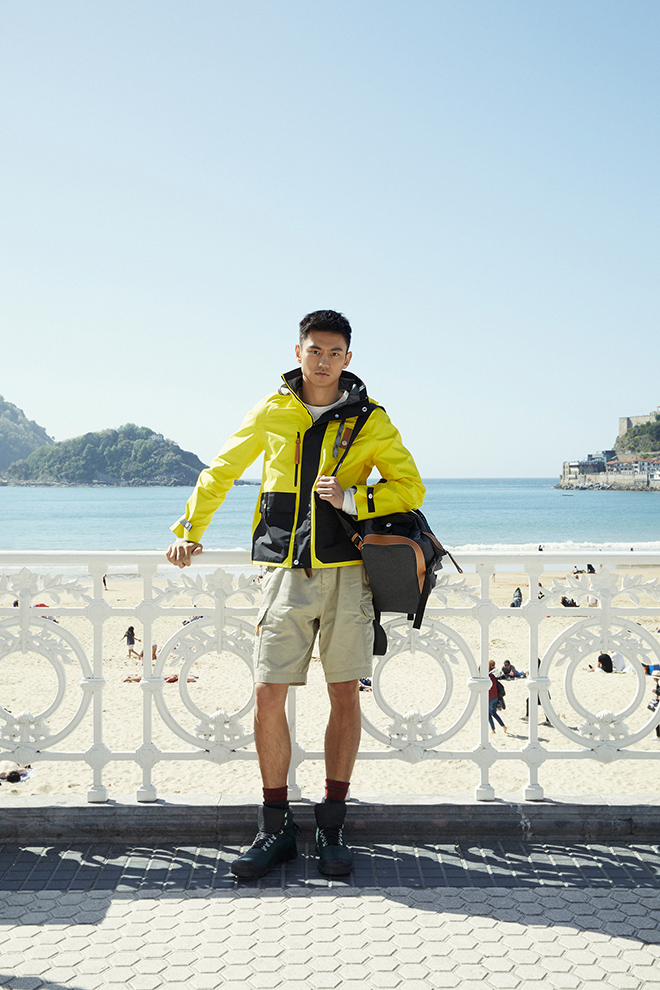 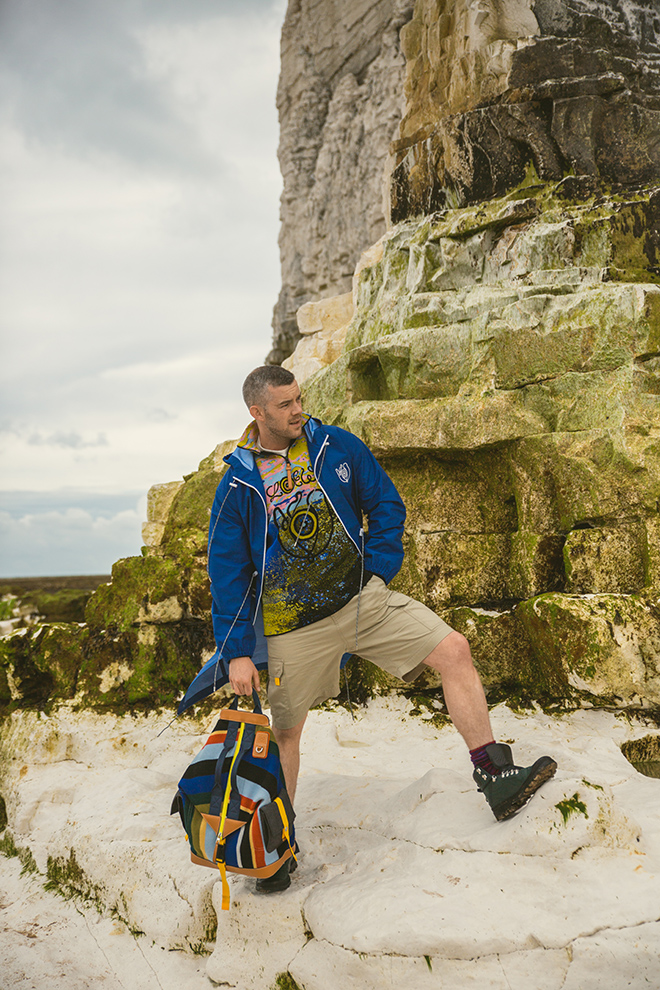 For Eye/LOEWE/Nature, Russell Tovey is photographed walking the fossil-strewn cliffs of Botany Bay in England’s southeast and along the sands of nearby Margate, where he is curating the art festival Margate NOW to coincide with the 2019 Turner Prize exhibition’s arrival at the town’s Turner Contemporary gallery this September, by Roberto Castelli. 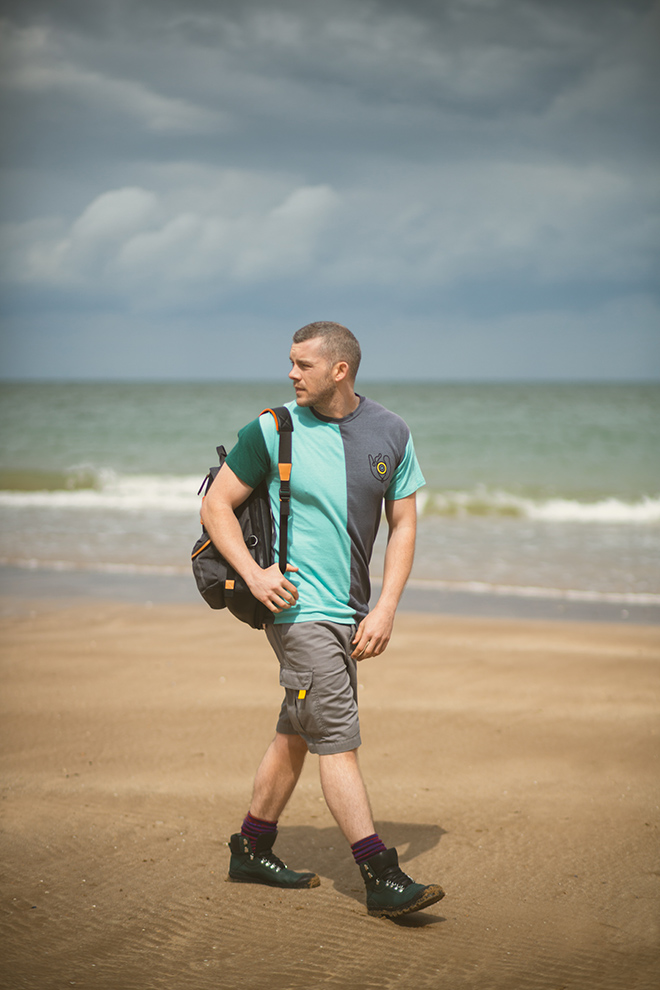 Loewe defines hautebeast with seven pocket combat trousers and an assortment of organic cotton t-shirts, calfskin leather hiking boots conveying a kind of urban street-cred that even men’s fashion amateurs would probably find it challenging to fall prey to fashion a faux pas. Interestingly enough, the Eye/Loewe/Nature capsule is not only imminently digestible to the least sartorial among us, it is also a well executed foundation to the brand’s fall winter 2019 menswear collection. 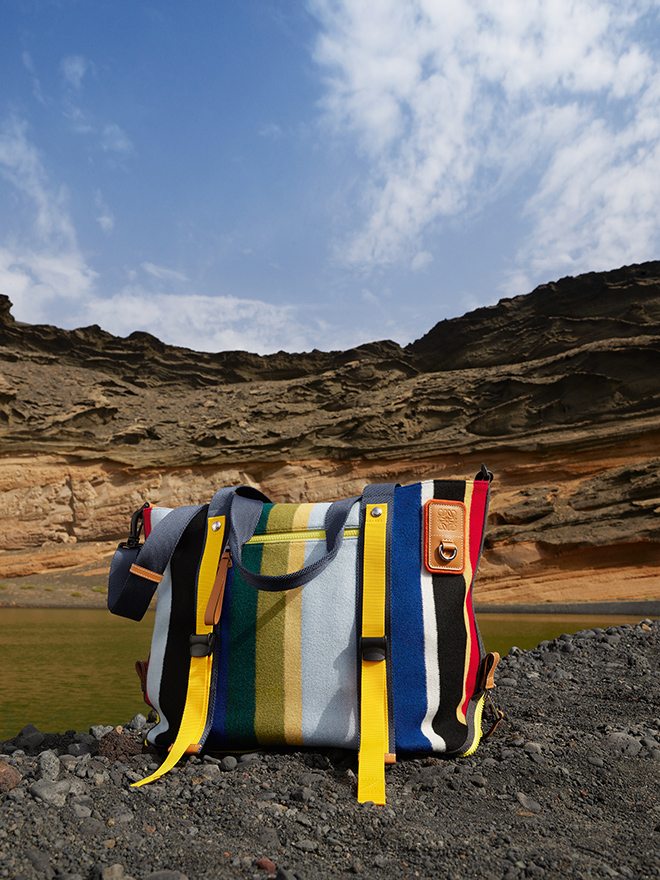 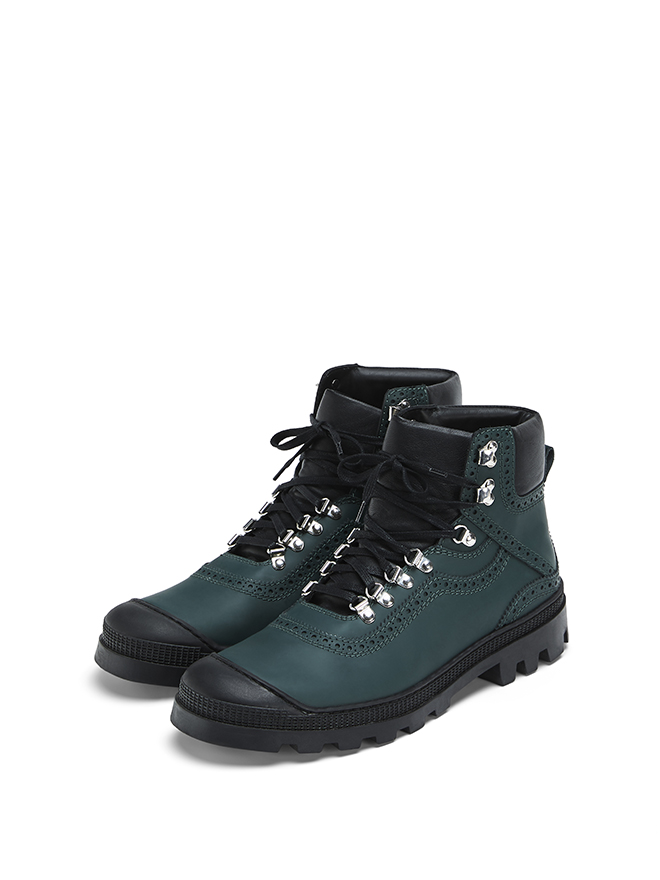 Held inside Maison de l’UNESCO, Loewe’s Fall Winter 2019-20 Men’s collection was set to a backdrop of Gelbe Modellierung (1985), an almost luminescent yellow sliced and
segmented canvas ‘wall formation’ by the German artist Franz Erhard Walther which played as visual metaphor for Anderson’s abstract and at times, almost androgynous ensemble of fabrics for men. 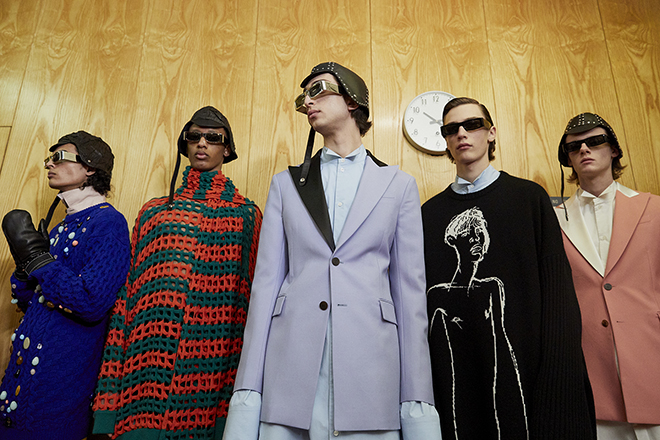 Volume takes precedence over cut or fit (but surprisingly fitted to shoulders, just nowhere else) where old hyper masculine garments like fishermen gaiters or the cowboy’s chaps are re-interpreted in a post-retro fashion, held up with nary but a belt. It’s bold, daring and more importantly, the unzipped boots constructed in the form of a lengthened undetachable “penny loafer” further plays up Loewe’s leather heritage. 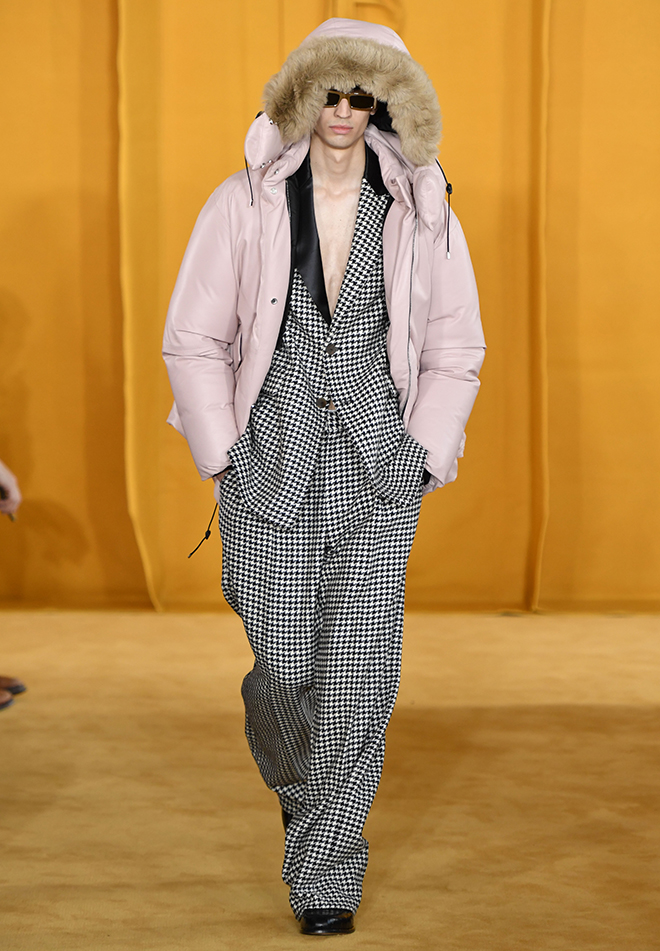 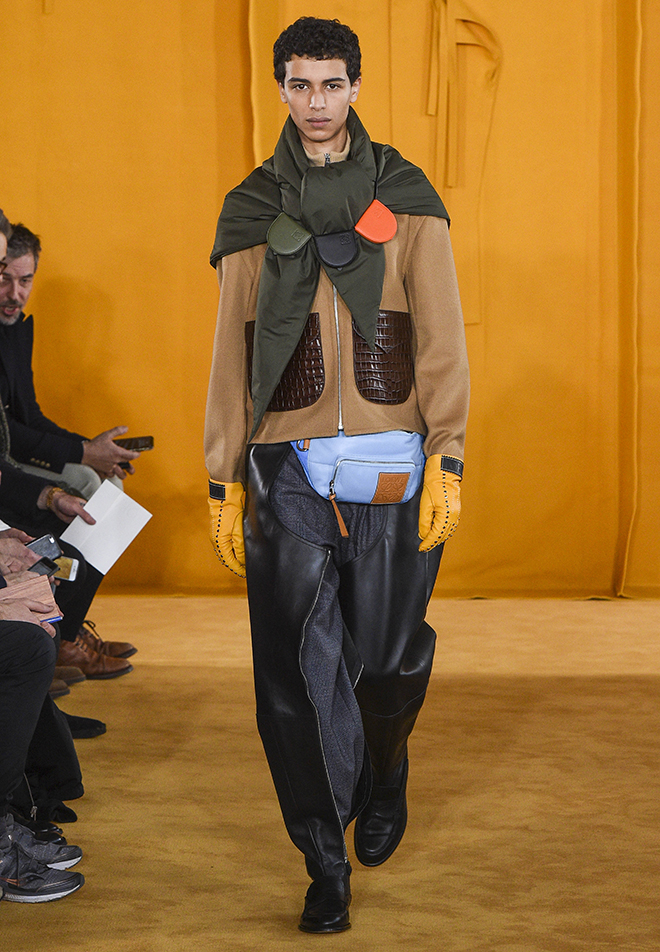 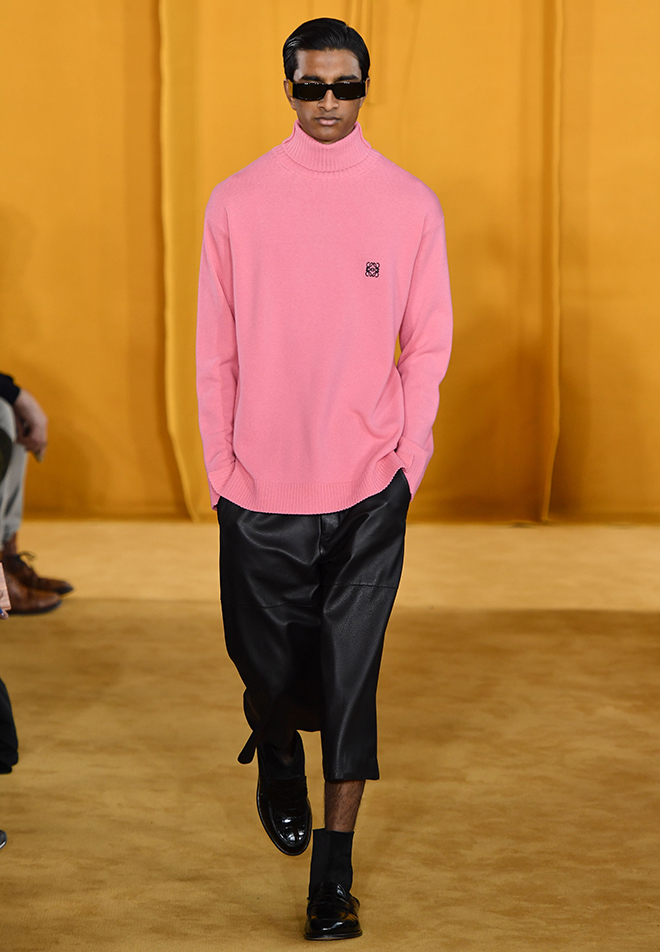 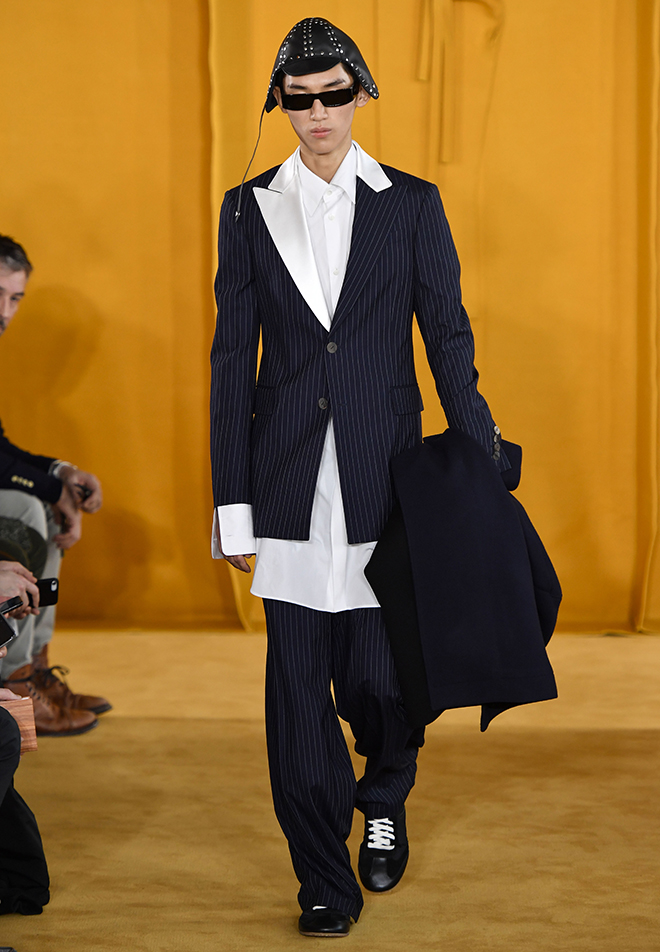 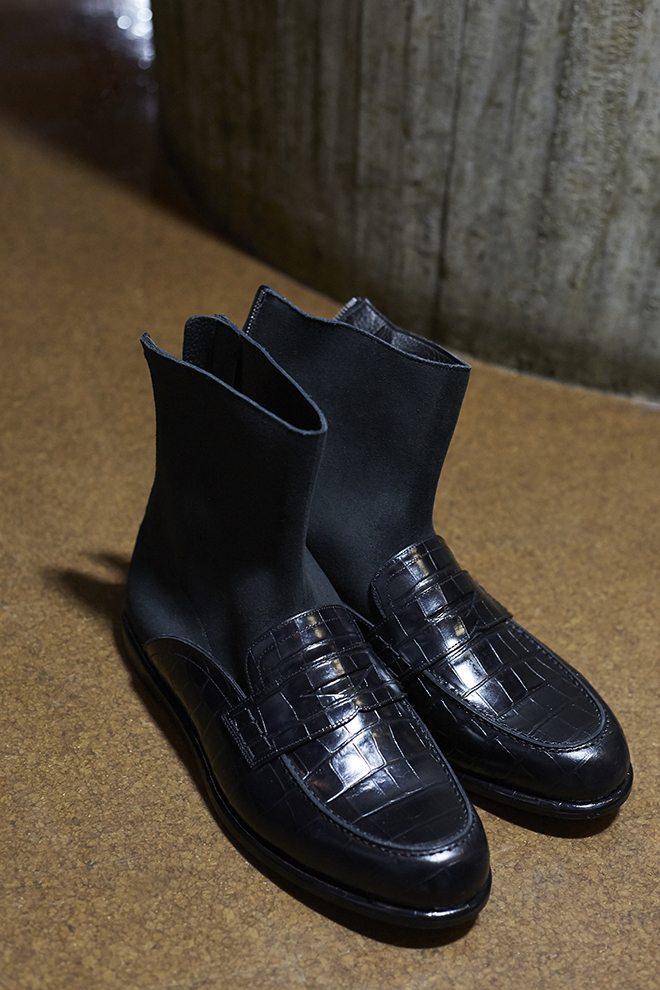 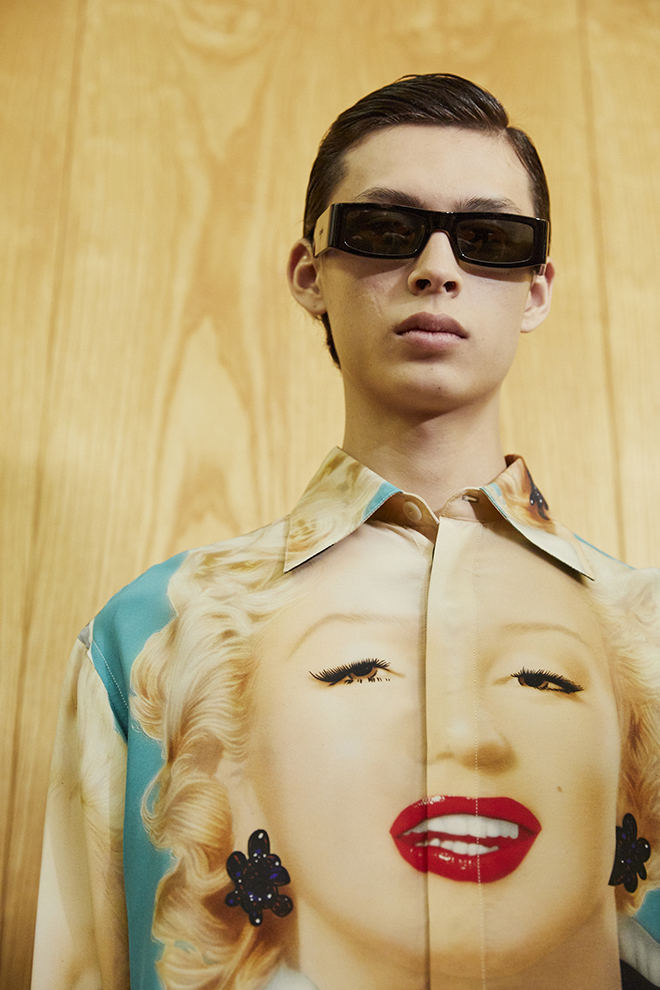