Guide: Suit Up for Age of Disruption

As the traditional business suit comes under threat, men are learning that there are more directions to corporate dressing than just up or down. 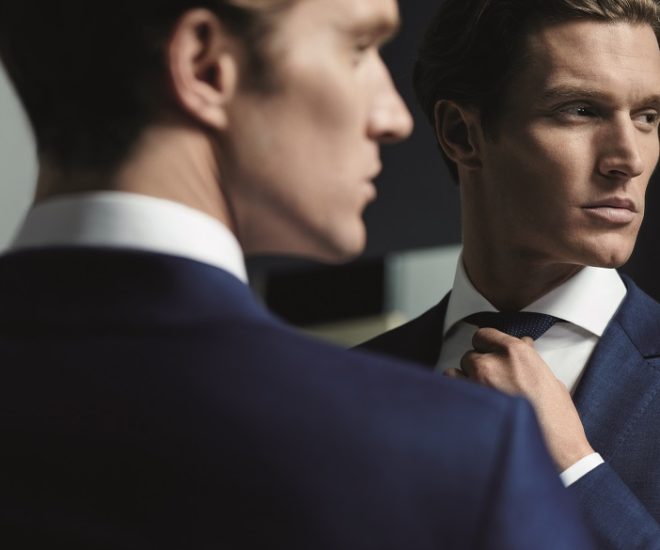 In the season finale of Billions, hedge-fund king Bobby “Axe” Axelrod had to pound the streets to win back former clients, failing miserably. It wasn’t until he ditched the designer suit and tie in favor of his regular business attire — hoodie, t-shirt and jeans — that he regained his mojo and started speechifying for the win. Dressed down (in high casual), he looked in control and ready to lead, and not just another guy in a suit begging for money. Quite the turn-on-head on Mark Twain’s “Clothes make the man.” To put it another way, expensive suits no longer denote business success.

The intention of a well-dressed workplace is to foster an image of professional success, and for the longest time the business suit embodied that confidence. Axe even said before his attire change (as if to convince himself): “Do you know why we wear ties? To signify seriousness of purpose. Ours is not to question why, but to do.” But clothing as a symbol of (self-)expression has evolved with the times. Office attire no longer distinguish management from workers. Silicon Valley’s “tribal uniforms” displaced the monotonous conformity of the workplace to create a more heterogeneous look. Virgin Group founder Sir Richard Branson notes that Twain was addressing the 19th century when dressing proper was important, whereas in many business setting today a clean pair of jeans, wrinkle-free shirt and pair of sneakers fit right in. So how did the business power suit lose its, well, power? The history of office wear in the 20th century goes something like this: Suits, suits, suits, suits, khakis. Indeed, the formal suit and tie has been quite the tyrant in its time, keeping a death grip on corporate business for decades by having generations of junior executives sedulously following the dress code of their bosses. The sartorially-inclined might argue that not all suits are made equal, but they’re just being pedantic; a suit is a suit, no matter the peak of its lapel or the fit of its cut.

While the suit’s provenance is likely too far-flung and complex to trace back, the modern look is said to have come directly from Europe at the turn of the century, where business titans donned custom-made frock coats complete with vest, pocket watch, striped trousers and top hat. The working class soon seized upon the fashion for work wear, but not before lobbing off the silly tails and shaping the garment into a more leisurely lounge suit. Mercantile tailors then made the suits slightly different every year (because we all know that’s the best way to get people to buy more clothes), leading to the proliferation of styles through the decades.

The indomitable suit survived the Depression and war, though cloth austerity led to the demise of the double-breasted. It gained personality with loud patterns when European designers insinuated themselves into business fashion, got cut from brave new synthetic fabrics, and paired up with ties that screamed color and size (with knots the size of babies’ fists). Then came Wall Street, the era of conspicuous consumption and flaunting power, where it lined the executive wardrobes of American gigolos and psychos. It became a corporate douchebag with suspenders, and made Armani a boardroom staple. It shrunk and billowed, all the while keeping the same basic shape for the last 100 years — a testament to the strength of its design. Such was the enduring value of the suit, and its monopoly on office dress codes seemed unshakeable.

Then something radical happened in the 1990s. Blame it on the rise of the tech geeks, preceded by a little creative marketing by The Gap and Levi’s (via Dockers), but suddenly the suit has succumbed to khakis and jeans as the standard corporate livery.

It all started with an innocuous trend called Casual Friday. What human resources thought would be a fun (and free) employee perk turned out to be the seed that eventually inspires office drones to cast off the yoke of their slave-suits. This newfound sartorial freedom left workers slightly stranded at the beginning — many were at a loss without the safety of suits — but with the help of opportunistic brands like Dockers, the new business casual paradigm was established and the (somewhat oxymoronic) relaxed-yet-proper appearance of khaki slacks became de rigueur.

The advent of the Information Age soon gave the traditional business suit its quietus. Technopreneurs liked nothing better than to rant against it (“If you don’t have anything to say, wear a suit,” Bing Gordon, co-founder of Electronic Arts, once told Fortune magazine), while Silicon Valley titans like Steve Jobs, Mark Zuckerberg and Sergey Brin ostensibly rejected the garment as anti-tech, uncreative and living in the past — in other words, dull. And when you run the world like these guys do, you can wear whatever the hell you want to the office, even hoodies and jeans.

This shift in dress code wasn’t just a matter of comfort or convenience, but signified a deeper change in the way people conceptualized professional success. The intense technological revolution has freed people from the confines of the workplace, leading the new generation of business graduates to believe (and decide) that working in a garage, in jeans, with the potential to make millions via a new startup, is more interesting than working in a glass and steel office at the bottom of a rigid corporate ladder. Suits were neither new nor modern, and companies that required them were thought of likewise; to put on a suit was to trail the bandwagon of self-made billionaires pushing into the future. In the new millennium, the confidence to dress informally and to disrupt traditional business codes only grew. Zuckerberg famously turned up to his Facebook IPO roadshow in his standard, nondescript uniform, causing consternation among Wall Street veterans. But what corporate conservatives don’t seem to understand is that the “CEO Casual” look is not about age (the lack thereof) or disrespect, rather it’s about presenting a modern, independent, innovative message. Moreover, dressing down only showcases how much power he commands; just because investors disagreed with his fashion choice, doesn’t mean they’re going to stop fighting for a piece of his company (in fact, Zuckerberg’s going to stick to his casuals, and investors are going to like it). But as waves of hoodie-wearing millennials flooded companies, it’s hard to tell who’s truly innovative and who’s merely posing. And once everyone in the workplace is wearing t-shirts, sartorial individuality is poised to stand out. Hipster-dandies rose to revive the suit, but with maverick cuts to demonstrate that they’ve got the stuff to pull it off (case in point: The abominable shrunken suit — which originated from Thom Browne — worn with exposed ankles). There’s also a hybridisation of dress codes of sorts, either in the ensemble (suits worn with sneakers) or in the garments themselves (drawstring suit trousers, or technical-fabric suits like Z Zegna’s Techmerino). The new emphasis on originality and freedom meant that anything goes in the office, really, insofar as it is polished and presentable. At the end of the day, the trend towards informality doesn’t actually get away from the traditional business emphasis on appearance and presentation. It simply replaces one standard with another that is, in its own way, just as preoccupied with appearance. At the very least, men are finally able to say that they wear suits when and how they want to.

This article was originally published in Men’s Folio Magazine