With mega-star power shouldered by A$AP Rocky, Tyler the Creator and Iggy Pop, there’s plenty of flash in the pan but there’s enough substance to show that Gucci knows how to make a bloody good, old-school tailored suit. 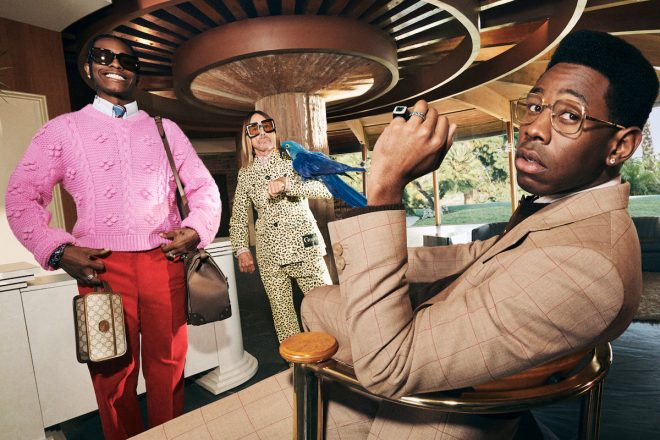 Gucci is almost a century-old brand and for an atelier with as long and storied a history of fashion innovation as Gucci, the maison has truly only invigorated us “suit snobs” twice when it comes to tailoring. The first was under the reign of Tom Ford and the second, perhaps most creatively flourishing era, under current men’s creative director Alessandro Michele.

“This is another chapter of this journey. With these campaigns, I am working on different ways of being elegant, and these three men embody this idea perfectly. I like to tell the story of elegance in completely arbitrary and unexpected ways. Perhaps elegance is something in the air that sometimes you are not even ready for. Male elegance can be unpredictable and strange.” – Alessandro Michele Undeniably, Michele has energised the brand with a flair of dramatism and retro-tastic ‘geek chic’ amping up the theatrical by leaning on the likes of Harry Styles, renowned English Singer, songwriter, and synonym for boy band One Direction, as frontman for Gucci’s tailoring campaign in 2018. It’s hard enough to embrace dandyism as a straight male with a barely refined sartorial palette but Gucci tailoring makes it easy; especially when it comes to Gucci’s latest tailoring campaign – it’s men’s suiting, but not the one your grandfather remembers.

“The result is a group campaign with three men who I believe had fun too. There is always this image of eccentricity, because they are in fact eccentric themselves. A certain type of fun is also portrayed and the idea of how one’s obsession with appearances can create a kind of common ground that can become a sort of brotherhood. It was beautiful to see these three men together, seemingly different but very similar.”

Monograms and patterns are stronger than ever, backed by an insouciance and irreverence that’s become core to Gucci’s aesthetic under the creative direction of Michele. Retro and incredibly masculine, yet eminently wearable and sported by this generation’s most talented musical artistes – A$AP Rocky and Tyler, the Creator gallivant around in slick Gucci suits with legendary punk rocker Iggy Pop and his pet parrots; it’s men having fun, an Expandables movie sans Stallone, Statham and guns but with large doses of masculinity, kitsch and joie de vivre.

Beyond a pay cheque, getting some of the music’s most fashionable figures to exhibit Gucci tailoring is a coup upon itself. Fashionably speaking, A$AP Rocky, Tyler and Iggy Pop aren’t a typical male’s fashion icons, but here, togged out in the peak of Gucci’s tailoring excellence, it’s men doing what they do best – working hard and playing harder. 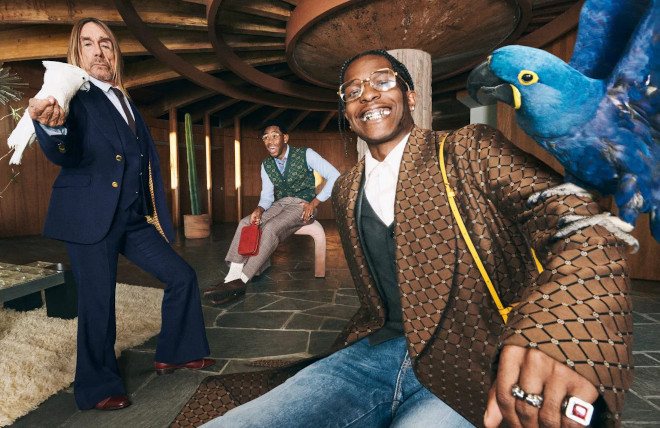 Having modelled for names like Raf Simons, Louis Vuitton and Calvin Klein, A$AP Rocky is considered one of the most fashion-forward celebrities in the world. Tyler, the Creator is also a larger-than-life style icon, with his equally outlandish Golf Le Fleur label and collaborations with brands like Lacoste, Converse and Suicoke under his belt: the pair of friends are joined by punk rock god Iggy Pop himself – it’s not just a fashion statement, its a poetic “passing of the baton” as music culture and fashion meet at a seminal juncture of what was once the domain of serious tailors on Savile Row or exhibited on the streets of Pitti Uomo.

Shot by cult photographer and director Harmony Korine (of Spring Breakers fame) in a swagger-licious modernist mansion in Los Angeles, Gucci’s tailoring campaign shows that an Italian haute couturier venturing into men’s suiting isn’t  just glitz and gimmick – don’t get me wrong, there’s plenty of flash in the pan but there’s enough substance to show that Gucci knows how to make a bloody good, old-school tailored suit.

Our colleagues at Men’s Folio have another take on Gucci’s latest tailoring campaign. 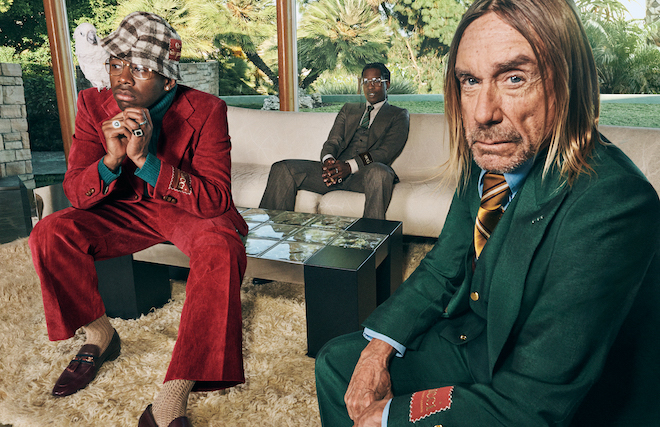 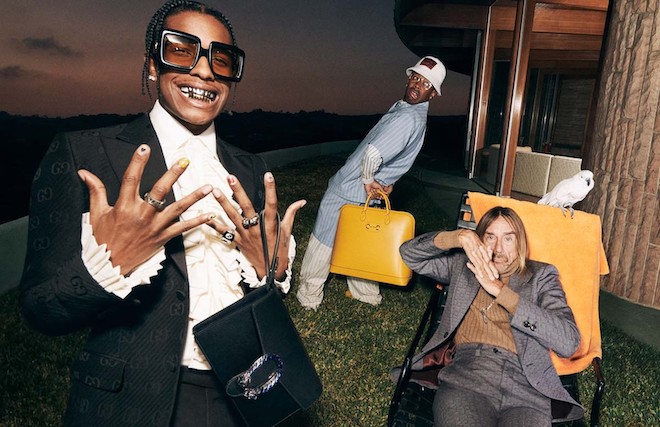