Best Hollywood Home of the Year

Called â€œHome of the Yearâ€ by some American journalists, this stunning house sits among the Hollywood Hills and itâ€™s full of new technologies: CinemaScope theater, 7.1-channel surround-sound, intricate TV concealment, extensive automation. The residence was designed and built by Temple Home, whose co-owner, Xorin Balbes, has earned recognition for his restoration of famous Los Angeles-area […] 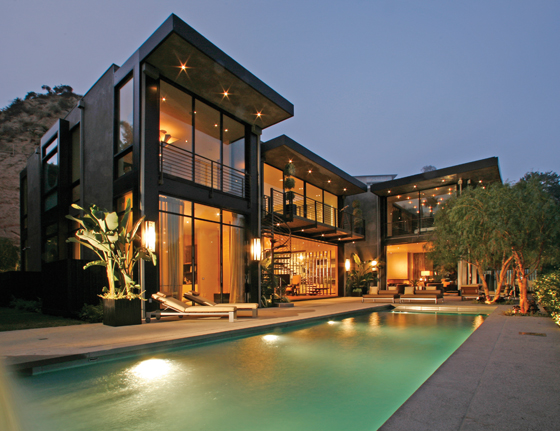 The residence was designed and built by Temple Home, whose co-owner, Xorin Balbes, has earned recognition for his restoration of famous Los Angeles-area homes.

â€œThey developed it as the ultimate bachelor pad, and part of their thing was that they wanted all of the technology that a young Hollywood actor or director might want,â€ says systems developer and DSI co-founder Eric Thies. â€œObviously, there were a lot of potential buyers here that fit that category, so for a 7,000-square-foot house they wanted a lot of technology crammed into it.â€

Three areas are filled by surround sound, including a rattling 7.1-channel JBL Synthesis system in the theater and an understated 7.1 Sonance architectural speaker layout in the family room. Thereâ€™s even a separate video game room that features a triple-screen auto racing simulator and a flat-panel TV that taps into a local PC for gaming fun.

The theater presents movies on a 125-inch Stewart Filmscreen in the superwide CinemaScope format (2.35:1 aspect ratio), accompanied by a Runco projector and CineWide anamorphic lens that fills the screen without black bars. Combined with the JBL system, which includes Synthesis processing, amplification and equalization, the theater rates with the finest of Hollywood screening rooms. The blend of A/V and architectural touches doesnâ€™t stop at the back door, either (35-foot sliding glass doors, by the way).

The outdoor pool area and landscaping are included among the 20 zones of housewide audio and peppered with 16 unobtrusively placed speakers. â€œThe ability for technology to disappear was far more important in this house than others weâ€™ve done, and the things we couldnâ€™t hide, like touchpanels and keypads, had to be special,â€ says Thies. â€œWe didnâ€™t want to completely give up A/V performance, and I think we compromised here in the right ways.â€