The opening of Ramallah’s first five-star hotel will mark another small step in the West Bank town’s steady march towards something resembling normal life. But its sixth-floor executive lounge looks out on a panorama of unresolved issues that cloud the economic outlook — a built-up Israeli settlement on a nearby hilltop, a Palestinian refugee camp […] 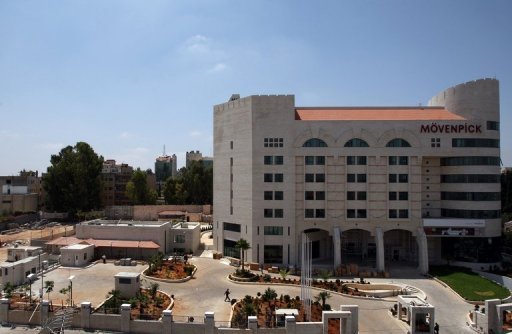 The opening of Ramallah’s first five-star hotel will mark another small step in the West Bank town’s steady march towards something resembling normal life.

But its sixth-floor executive lounge looks out on a panorama of unresolved issues that cloud the economic outlook — a built-up Israeli settlement on a nearby hilltop, a Palestinian refugee camp down below and the hazy skyline of distant Jerusalem beyond a grim separation wall.

The Movenpick Hotel Ramallah, a locally owned franchise of the Swiss-based chain, is aimed primarily at corporate clients and has been billed as yet another indication that the occupied West Bank is open for business.

“The past is the past. We believe in the future of the country and the future of this hotel. It’s a beautiful investment and an opportunity for Ramallah,” says general manager Daniel Roche.

The 40-million-dollar hotel includes 171 rooms and suites, an outdoor pool, fitness centre and seven conference rooms. The main restaurant has an Italian chef and a downstairs cigar bar that will serve up 20-year aged whiskeys.

It will cater to the entrepreneurs, aid workers and diplomats who have flocked to Ramallah in recent years as security has improved following the 2000-2005 Palestinian uprising.

A string of chic new bars and restaurants have already turned the town into an easy-going Palestinian approximation of Tel Aviv, the transformation underpinned by technocratic reforms and a massive influx of foreign aid.

It has all happened at a time of pervasive pessimism over the peace process, which sputtered back to life in early September only to stall three weeks later with the expiry of a partial Israeli settlement moratorium.

That has Palestinian officials and investors — many of whom have vivid memories of past periods of calm collapsing into renewed chaos — casting a wary eye on the latest signs of prosperity.

Many point out the Movenpick was first conceived during the halcyon early years of the peace process in the 1990s but frozen by the unrest that followed.

“This is what we have learned from the 43-year history of the occupation.”

The International Monetary Fund has also urged caution, warning recent double-digit economic growth has been mainly driven by the four billion dollars in foreign aid the Palestinian Authority has received since 2007.

In September it warned the West Bank’s growth was shaped more by Israeli restrictions than comparative economic advantage and was “bound to decline” if Israel did not take further steps to improve movement and access.

“Let’s keep it in perspective,” says Maher Hamdan, CEO of the Palestine Trade Centre, or Paltrade, which represents more than 320 local businesses.

“The potential for economic growth and attracting investment would be an order of magnitude of what it is today if you really had a peace process.”

Sam Bahour, a Palestinian-American businessman who launched a shopping mall and supermarket chain in 2004 and now runs a consulting firm specialising in start-ups, says the appearance of normal economic life can be deceiving.

“These are investors who have taken a leap of faith with the conviction the occupation will end,” he says.

“So they are willing to wait out their investment hoping that they will be well-positioned, once the occupation ends, to be the first movers on the market… They are investing in the future, and that’s a high risk.”

Although Israel has lifted several of the hundreds of checkpoints and roadblocks it maintains across the territory, trade remains difficult, and economic activity is heavily restricted in the more than 60 percent of the West Bank that is fully governed by the Israeli military.

“Another few cafes, another few hotels, is not going to build an economic foundation for statehood,” Bahour says.

“What will is borders, water, land, and the ability of Palestinians to trade directly with the outside world.”

Even high-profile projects like the Movenpick routinely encounter difficulties and delays in importing goods into the territory.

“Every single piece that had to be imported for the hotel was subject to Israeli procedures at the crossings, and these delayed work,” says Talal Nasreddin, one of the owners of the Movenpick Hotel Ramallah.

That has meant, among other things, that the Movenpick will not immediately be able to offer the chain’s trademark ice cream.

“We are working on that, and we will definitely one day have ice cream,” Roche, the general manager, says. “It’s a long process.”