Sunseeker has redesigned the stern on its Ocean Club 42, with options including a ‘double-deck’ ocean club expected to be popular in Asia.

Sunseeker has shown Yacht Style images of the spectacularly redesigned stern on its new Ocean Club 42, in keeping with the name of a model that has been significantly extended in length since the design was known as the 133 Yacht. Part of Sunseeker’s new Superyacht Division for models from 101ft upwards, the Ocean Club 42 is targeted at markets including Asia where, together with Sunseeker Asia, the British builder has delivered 15 superyachts above 30m over the last decade. Two more are under construction for clients in the region – a 131 for delivery this year and a 116 for 2021.

Francesco Frediani, appointed Sunseeker’s Director of Superyachts & Dealer Network in January, was a key figure in the redesign of the aft section of the Ocean Club 42, along with CEO Andrea Frabetti and Ewen Foster, Director of Design and Naval Architecture.

Frediani, a mechanical engineer by training, has spent three decades in the yachting industry including 12 years distributing Arneson surface drives for Twin Disc, seven with Riva at Ferretti Group, and the past 10 with Mangusta at the Overmarine Group. The Italian’s influence was pivotal in rearranging the Ocean Club 42, which originally featured a relatively conventional beach club based around a fold-out garage door. 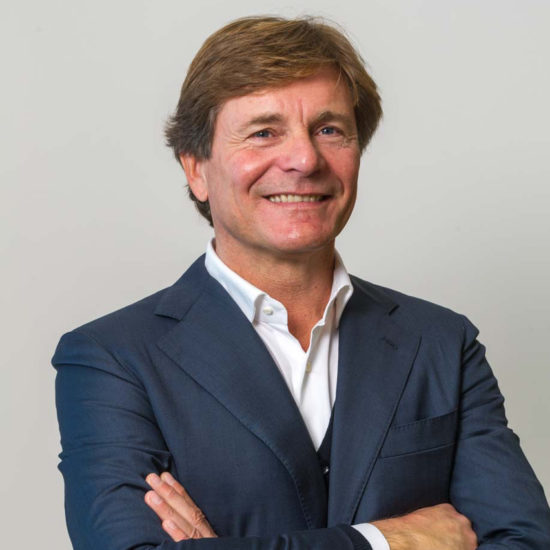 “Sunseeker has delivered over 130 superyachts so is a big player in the market, but it has been successful with designs that are very consistent with its smaller and medium-sized yachts,” said Frediani, who as far back as 1995 worked with Foster and Sunseeker co-founder John Braithwaite during the development of the Predator 80, which used Arneson drives.

“We now want to extend our superyachts to reflect the designs of today, which are different because the lifestyle on board has changed. A superyacht is not so much a statement anymore but a tool to enjoy experiences and adventures at sea, so design requirements have changed.

“Some of our superyacht clients are new to the industry, so we have to match their perceptions by offering products different to what we have been used to. The Ocean Club 42 is a fantastic design, but was initially missing the wow factor, a real beach club, not just a convertible garage.”

Notable changes to the four-deck, 448GT superyacht include a side-loading garage, the usual practice on large yachts, which freed up aft space for more creative ideas. 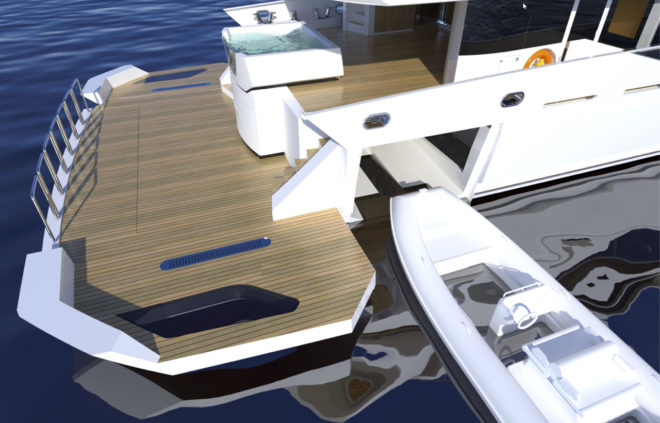 The Sunseeker Ocean Club 42 redesign includes a side garage for a Williams 625 tender, which can be accessed from the drop-down side

The new design includes a see-through spa tub on the aft main deck that overlooks an enlarged ‘ocean club’, which has extended the overall length to 137ft 10in and can be expanded laterally by drop-down sides.

The living space can be further increased at the stern by a full-beam ‘wide transformer’, which can be deployed in three modes – extended, boarding and swimming. Respectively, these modes extend the deck horizontally by 6ft, provide steps up to a raised boarding platform or down to a submerged swim platform, suitable for swimming, diving and other watersports.

The Ocean Club 42 also offers the option of a pool deck that provides an additional socialising area and also cover for the ocean club, which Sunseeker believes will make it a popular option in Asia. The pool deck is accessed from the main deck by four steps and includes a glass skylight aft of the spa tub, providing a link to the pool and views of the ocean club below.

“We’ve looked at where the yacht can be improved and made some significant improvements, particularly around the ocean club area,” Frediani says. “You can now really live in this space.” 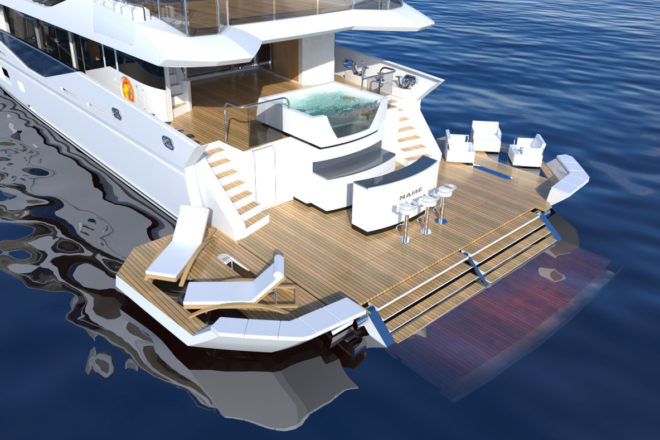 As well as drop-down sides, the ocean club design includes a ‘wide transformer’ that can be extended (below), submerged (above) or raised

The rest of the yacht’s original design remains largely the same, including the foredeck, which has the option of a spa tub and sunbathing area, or a larger sunbathing area that covers storage for a rescue tender that can be deployed by a crane.

“Our mission was to create a yacht with appeal around the world. We imagine that the first option with the open ocean club will be popular in the Mediterranean and understand that many clients in Asia are more sun conscious so may prefer the option with the pool deck,” Frediani said.

“Sunseeker has a proven track record for sales of superyachts over 100ft in Asia, so we’re confident of the appeal of the Ocean Club 42 and all of our Superyacht range in the region.” The model is part of a new-look Superyacht range that includes the existing 116 and 131 models, and is headed by the flagship Ocean Club 50, the aluminium-hulled yacht formerly known as the 161.

Sunseeker started this year with the world premiere of the Manhattan 68 at Boot Dusseldorf and expects to launch the Manhattan 55, Predator 55 EVO, and Ocean Club Ninety models later this year.