Fountaine Pajot, Leopard and Bali are all benefiting from the growing demand for sailing catamarans around Asia.

Fountaine Pajot has made strong inroads into Asia with its sailing catamarans over the past couple of years. Fountaine Pajot staged the Asia debut of the Alegria 67 at last year’s Singapore Yacht Show; a new unit is expected in Thailand this year

The La Rochelle builder staged the regional debut of its stunning flagship Alegria 67 at last year’s Singapore Yacht Show, complete with an onboard performance by French-Vietnamese harpist Heloise La Harpe. A new Alegria 67 is expected in Thailand later this year.

Also later this year, the shipyard will release its ‘New 59’ designed by Berret-Racoupeau, the La Rochelle design studio behind the Alegria 67 and other recent sailing yachts by Fountaine Pajot, which has produced over 4,000 catamarans since 1976.

Inspired by the 67, the 59 will feature a 30sqm flybridge and a 27sqm cockpit to ensure guests can enjoy large outdoor areas, as well as up to six cabins down below. An Elba 45 recently arrived in Korea and another has been ordered for Indonesia, where Fountaine Pajot is represented by Yacht Sourcing

As well as the big models, Fountaine Pajot offers a comprehensive range from 40ft including its most recent launch, the Elba 45, which had its world premiere at Cannes last year.

A new Elba 45 for a Korean owner arrived in early May, while Yacht Sourcing, appointed as the yard’s Indonesia dealer last year, has ordered a four-cabin unit for potential delivery by the end of 2020.

“Our Elba 45 has been adapted to tropical specs and with four cabins because we think it will be both a great owner yacht and charter boat,” says Xavier Fabre, Yacht Sourcing’s co-founder and Director of Sales. “It’s ideal for charter guests to discover Indonesia’s islands and waters.” 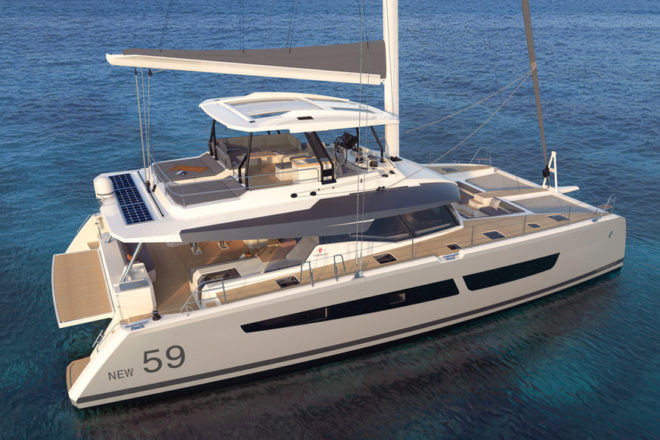 Fountaine Pajot’s other sailing models include the Saba 50, Saona 47, Astrea 42 and Lucia 40, one of which was sailed by its Taiwanese owners on a cruise to nearby southern Japan just ahead of the Covid-19 lockdown.

An Astrea 42 ordered by China dealer Speedo Marine arrived in April, while a Saona 47 (owner’s version) is expected in Hong Kong by late summer for a client of local dealer China Pacific Marine. Multihull Solutions (Thailand, Malaysia and Singapore), Asia Yachting (Philippines) and HBS Yachting (Korea) are among the builder’s other dealers in Asia.

“The way we design our cruising catamarans is based on our conviction that the ultimate experience of boating combines sensations and emotions with great comfort and spaces for socialising. That is why, at Fountaine Pajot, we never separate the focus on performance from our aesthetic approach,” Guedeu says.

“By relying on the talent of renowned designers, we have been able for the past 40 years to reinvent the balance between French refinement and audacious technical achievements. The unique design and the refined line of our hulls guarantee performance while adding a combination of comfort, stability, agility, sensations and elegance on the water.”

Leopard is another of the world’s leading catamaran builders and has produced more than 2,000 over the past two decades in South Africa, including for sister companies The Moorings and Sunsail. Today, the brand offers a well-tested range of four sailing catamarans – 40, 45, 50 and 58 – and a unique ocean cruising pedigree. Leopard recently launched a Lounge version of its 45

“Leopards are proven blue water sailing catamarans as we’ve delivered over 1,300 boats on their own bottom from Cape Town to destinations all over the world,” says Kit Chotithamaporn, Leopard’s Yacht Sales Manager – Asia. “We’re the only catamaran builder that can claim this.”

The latest Leopard offering from the Robertson & Caine shipyard in Cape Town is the Leopard 45 in a Lounge version. The new edition essentially adds a hardtop lounge with seating area, sunbed and table beside the elevated starboard helm, as seen on the Leopard 50 that was premiered in early 2018 and had its Asia debut in July of that year.

The accommodation has also been upgraded on the 45, which is available in three or four cabins, and features exterior and interior design by Robertson & Caine and Simonis Voogd naval architecture. 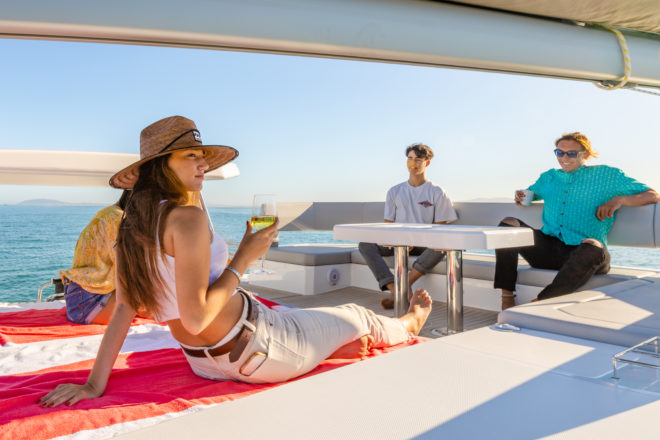 The ‘lounge’ includes a seating area, sunbed and table on the hardtop

The 40 is available with three or four cabins and features an interior design that was upgraded two years ago. The 50 is available in four or five cabins, while the flagship 58 offers four to six cabins and has a flybridge that seats 10.

The shipyard builds about 150 sailing yachts and 50 powercats  a year, with about half of them Leopard branded for private owners.

As well as their seaworthiness and well established cruising capabilities, Leopard catamarans are also noted for design innovations such as the forward saloon door and foredeck cockpit, which first featured on the former Leopard 44. 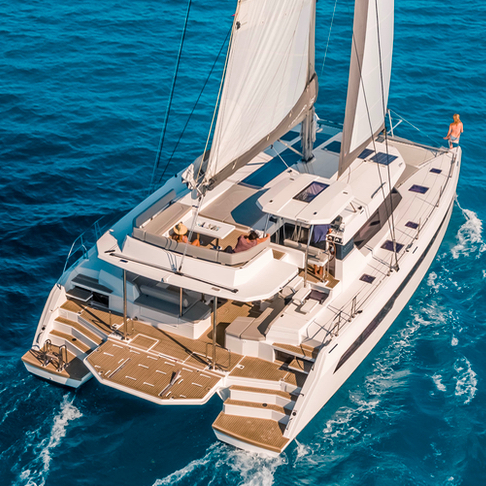 “These are the two main features Leopards have come to be known for now,” says Kit, who says the ventilation offered by the forward door is a bonus in hot climates along with the no-maintenance hardtops covering the aft cockpit, helm station and forward cockpit.

Other key features include stepped hulls that emphasise volume above the water line, a powerful sail plan, a safe rig featuring double back stays and rigid boom vang, and a clever deck layout ensuring all lines lead back to the helm station to allow for single-handed sailing.

In addition, there’s also an electrical davit system that turns dinghy and outboard motor lifting into a single-button operation.

Bali is a relatively new brand, having emerged from Catana in 2014, but has quickly developed a strong range of sailing catamarans boosted by the addition of three new models in 2020. 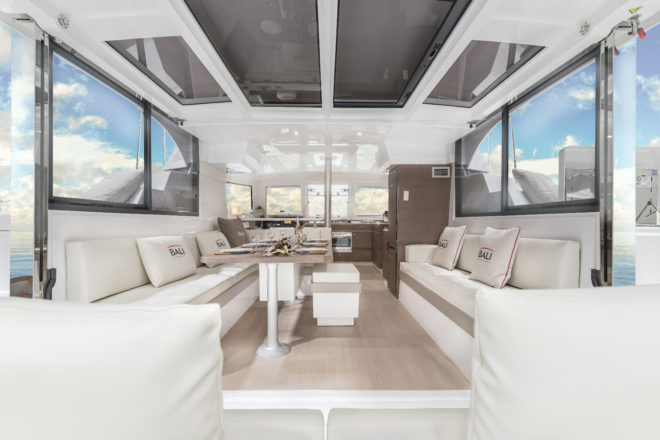 Bali debuted its new Catspace at Boot Dusseldorf in January

The Catspace Sail was the first of this year’s new offerings and was on show for the first time at Boot Dusseldorf, a show that could host the motor yacht version next year.

The Catspace Sail features the Bali trademarks – both developed by Catana founder Olivier Poncin – of the solid foredeck and tilting saloon door, which can be raised and slid beneath the roof to completely open the interior to the outdoors, as well as many other outstanding features.

“The Catspace is just 40ft long yet it can have two forward cabins as big as the aft ones,” says Boris Compagnon, Bali’s Sales Director. “The volume on this boat – specifically the cabins, foredeck, saloon and flybridge – is unique on the market for its size.” The 4.8 Open Space is the brand’s most recent launch and offers a six-cabin, six-bathroom version, which Bali believes is “unheard of on a 48-footer”. Features include the brand’s tilting saloon door and forward saloon door, as well as a foredeck cockpit with lounge and sunbathing area, and a relaxation area on the coachroof.

Originally scheduled to premiere at the now-cancelled International Multihull Boat Show at La Grande Motte, the yacht is now expected to debut at the Cannes Yachting Festival.

The 4.6 is the next new model and was initially slated to debut at Cannes, although all release plans need to be confirmed due to the Covid-19 pandemic. 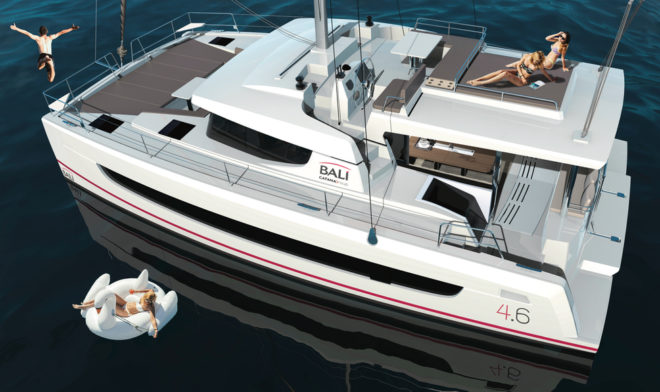 Like the 4.8 Open Space and flagship 5.4 Open Space, which premiered at Cannes in 2018, the 4.6 will also feature a forward saloon door and has the option of three, four or five cabins, the latter a “unique offer on a 45ft cat” according to the shipyard.

Phuket-based Asia Marine was appointed as Bali’s dealer in Thailand last year and is expecting a 4.1 sailing catamaran later this year. The dealer’s sister company Asiamarine covers Vietnam and Cambodia, while Beaufort Marine in Hong Kong is also among seven dealers in Asia, where Compagnon believes the new brand has room to grow.

“Bali already has a very high ranking globally,” says Compagnon, who estimates sailing cats make up 90 per cent of Bali’s output, as the brand has only launched one motor yacht so far. “Overall, we are a bit behind in the US and Asia, so we can see growth in these markets in the future.”