Dr Achier Chung was honoured as SeaKeeper of Malaysia at this year’s International SeaKeepers Society Asia Awards Dinner in Singapore – a remarkable achievement for a woman who suffered from depression in her first years as Reef Guardian’s Lead Marine Biologist. 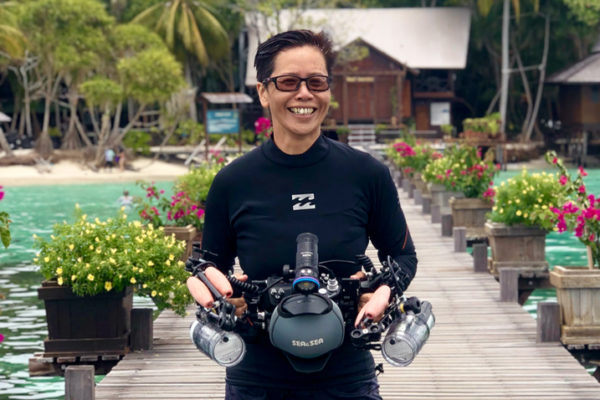 Dr Achier Chung has been Lead Marine Biologist at the Sugud Islands Marine Conservation Area (SIMCA), east of Sabah, since 2004

Chung, however, has battled through adversity on and off the sea to lead a genuine environmental success story in the Sugud Islands Marine Conservation Area (SIMCA), Malaysia’s first privately managed marine conservation area, spanning 463sqkm off Sabah’s northeast coast.

Staff numbers have risen from four to 16 since she joined the Reef Guardian base in Lankayan Island Dive Resort in November 2004, just over a year after the non-profit organisation was state-appointed to manage SIMCA.

The enforcement programme she introduced has in large had its desired effect, as the most common threat of destructive fishing tactics and trawling have waned dramatically.

“We used to conduct 300 sea patrols a year, almost one a day. Back in 2006, we could stop up to 10 boats a day, but today we might only stop one in a week,” said Chung, who featured on Discovery Channel Asia in an episode of the Frontier Borneo series about fighting fish bombing in the Sulu Sea. 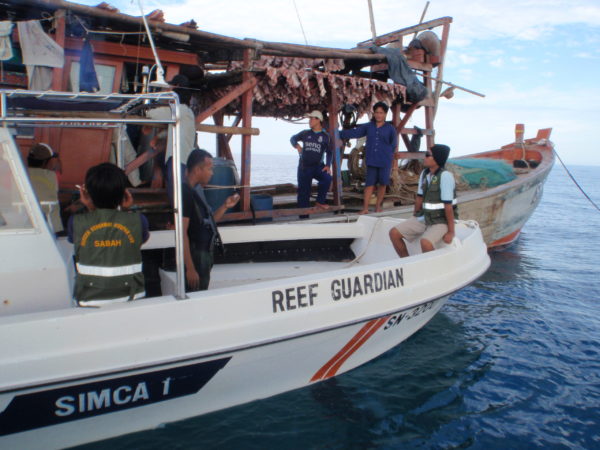 SIMCA was primarily set up to protect and grow the area’s sea turtle population and since 2009 has been part of a network of Marine Protected Areas (MPA) within the Coral Triangle that connects the marine turtle populations in Malaysia, Indonesia and the Philippines.

“The hatchery rate when I joined was about 30 per cent. Today it’s about 70-80 per cent,” she says, although the total number of nests does give her cause for concern.

Lankayan is about 80km north of Sandakan, Sabah’s second-largest city, and visitors to the dive resort usually fly in to the east-coast hub then take a 90- 120min boat ride.

SIMCA was declared as a Category II marine conservation area under the IUCN Protected Area Management Category, which specifies that the area is ‘to be protected and managed to preserve natural condition and to provide recreational opportunities’. The zone covers Lankayan, the larger island of Tegaipil and the smaller island of Billean – both uninhabited – plus a large ‘rectangle’ of sea around them. 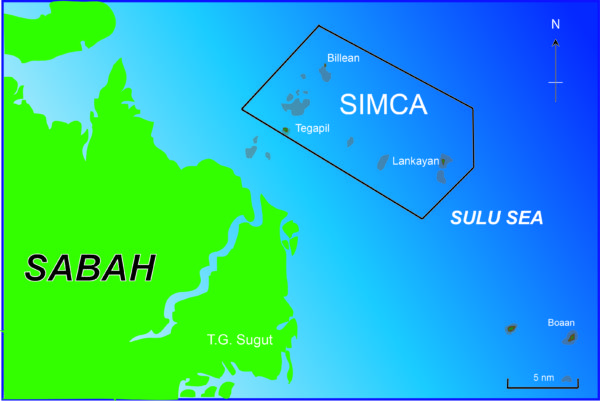 SIMCA comprises 463sqkm of sea around Lankayan, Tegaipil and Billean

As a resort wasn’t allowed to manage an MPA, Reef Guardian was established and appointed by the Sabah State Government in October 2003 to manage SIMCA in collaboration with the Sabah Wildlife Department.

Reef Guardian’s objectives were principally to control human activities threatening the reefs and marine life, monitor changes, and to promote marine conservation through education and ecotourism, using the latter to achieve sustainable funding for management of the area.

Dr Chung joined Reef Guardian as Lead Marine Biologist in late 2004, having graduated with a Master of Science in marine biology from Universiti Sarawak Malaysia.

Her first role in Lankayan was to improve the sea turtle hatchery and monitoring programmes for the green turtle and the smaller hawksbill (her thesis was on the swimming behaviour of hawksbill hatchlings).

However, within a year, enforcement quickly emerged as a bigger priority. It has been the focus of much of Reef Guardian’s efforts for more than a decade and remains its biggest challenge. 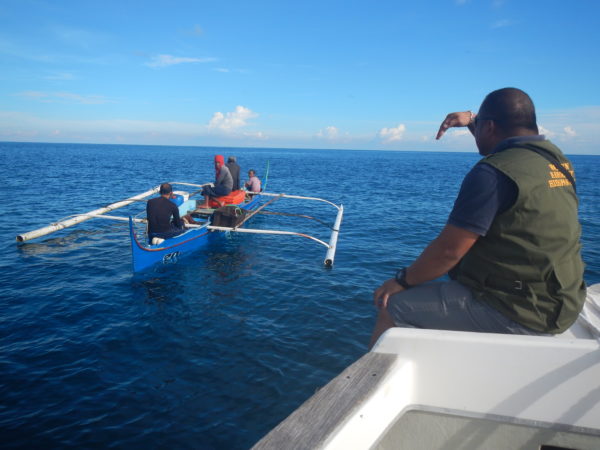 “Our resources were being impacted by illegal fishing tactics like reef bombing, then I met someone at a conference who said, ‘Secure your resources first before you do any research’,” Chung recalls. “I realised that if you’re not doing any enforcement work, your research and other work will be affected.”

As a private organisation, Reef Guardian didn’t have any legal power, so worked with the Sabah Wildlife Department to enable its staff to be trained and certified as Honorary Wildlife Wardens, with the right to stop, inspect, detain and report suspicious vessels, and hand over cases to relevant authorities for prosecution.

The Reef Guardian team work with many enforcement agencies including the marine police, who can escort them while approaching and inspecting any vessels.

“If there’s any illegal fishing equipment or even wildlife, then they can be prosecuted, although only 10-15 of our prosecution cases have been successful over the last decade or so,” Chung says. 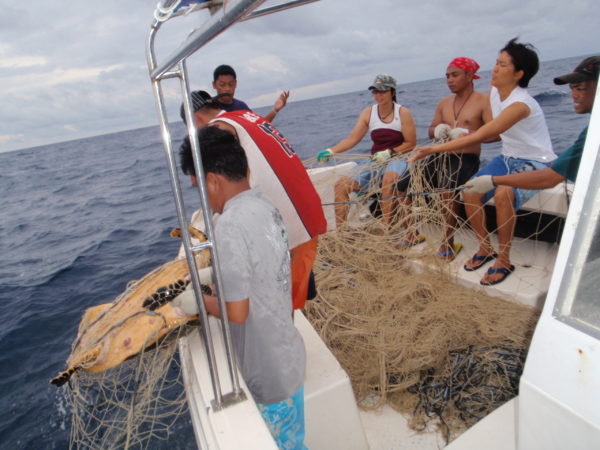 Security in and around the area has been further strengthened since March 2013 when the Eastern Sabah Security Command (ESSCOM) – which covers 1,400km of the state’s east coast – was established as a consequence of the Lahad Datu standoff.

However, even when they ‘catch their man’, Reef Guardian staff are not necessarily overjoyed. Chung references a fishing boat from another Southeast Asian country that came into SIMCA at night.

“A boat came in about 9.00pm and we have radar tracking, so we went to stop the vessel and inspect it. We found a lot of sharks, whole sharks, on board,” Chung says.

“We detained the boat and handed it over to the marine police, but the net was still in the sea. When we pulled out the net later, we saw a lot of sharks and also turtles trapped in it.”

Reef Guardian also focuses a lot on education, working closely with local schools and the public, primarily in Sandakan but also in Kota Kinabalu, the state’s capital and largest city, situated on the west coast. 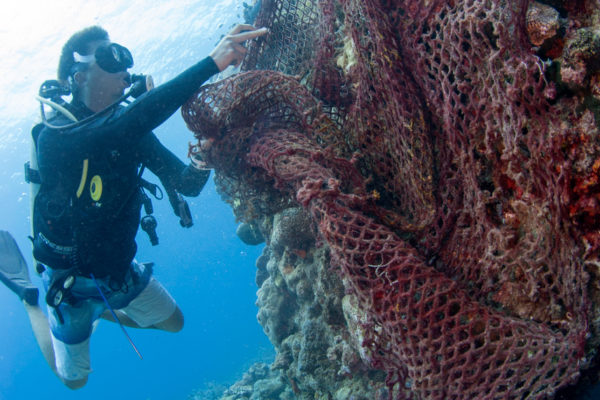 A Reef Guardian researcher removing a ghost net from the reef

Education also incorporates many of the 3,000 dive tourists that stay at the resort each year. Chung admits it’s a balancing act trying to accommodate tourists who want to view turtles in the wild while noting that any human presence can potentially disrupt a sensitive ecosystem.

“It wasn’t easy in the beginning, but it’s manageable now. The resort wants to make tourists happy and they come for the diving, but they may also want to see the turtle eggs and hatching,” Chung says.

“We’ve educated them on how to behave over the years and they do listen. We’re generally dealing with experienced divers who care about marine life.”

Chung’s vast experience and the programmes she has set up have resulted in many other MPAs sending their staff to SIMCA for field training and experience, as well as for data exchange. 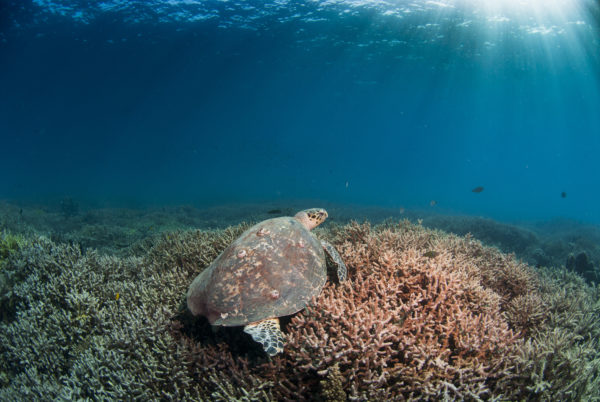 Reef Guardian’s next steps include applying for funding to counter the relatively new threat of poaching by identifying any unfamiliar threats to the marine life within SIMCA, while also expanding the organisation to the other two islands.

“To protect over 46,000 hectares is not easy. Most of our work has been focused on Lankayan so we’re trying to develop the infrastructure we would need for staff to live and work in Tegaipil, but these are uninhabited islands, so there’s a lot to set up, from electricity to Wi-Fi.”

Chung seems genuinely bashful when asked why she won the SeaKeepers award, which was presented during a lavish evening at the Constellation Ballroom in ONE ̊15 Marina Sentosa Cove. 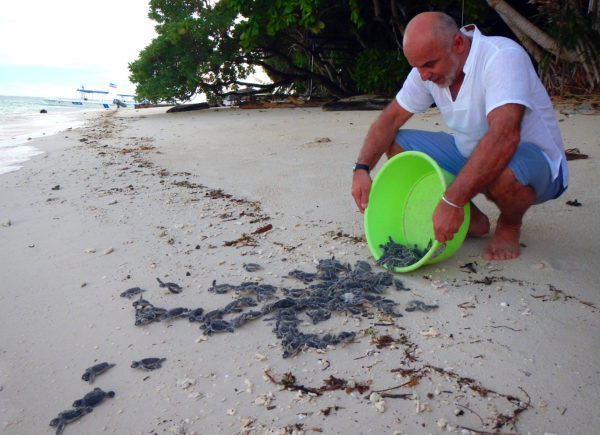 “I don’t know, actually. Maybe just because of my work for the past 15 years. It wasn’t easy at the beginning, especially from 2004 to 2008. I was depressed three times during that period,” says Chung, who seems to continue to be burdened by her work and responsibility.

“It has got better, but because it’s a conservation area, we have more and more fish here each year, so the area then becomes more targeted. It’s an ongoing battle.”

The original article appears in Yacht Style, Issue 47. Email [email protected] for print subscription enquiries or subscribe to the Magzter version at: www.magzter.com/SG/Lux-Inc-Media/Yacht-Style/Fashion/