Fairline has secured double-figure sales of its new Squadron 68 including from the US, Europe and Asia, where the British builder’s dealers include Simpson Marine.

When Fairline’s new Squadron 68 debuted at the Cannes Yachting Festival in September 2019, it received the exact response a yacht builder dreams about. A new client came along who just had to have the boat – and right away. There was only one problem. This particular hull had already been promised to another buyer. 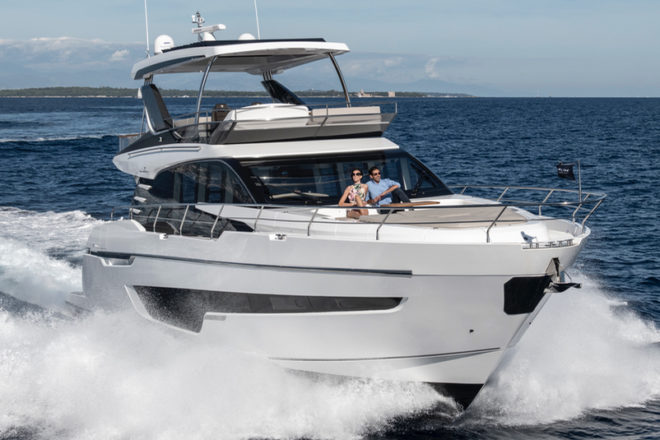 “It was one of those once-in-a-million encounters,” says Miles Moorhouse, Head of Marketing for Fairline Yachts. “Somebody we’d never met before walked onto the stand. We showed him the boat, he was quite taken with it and he said he’d like to buy it.”

The builder explained that it wasn’t available, but the new client was insistent on having this particular boat. Fortunately, Fairline was able to come up with a solution that worked for everyone.

Although it was the first Squadron 68 to premiere, the boat was actually hull number three. The first two hulls of the flybridge motor yacht had been customised for their owners, in the USA and Asia, while number three, destined for Europe, had been built to standard dealer specifications. 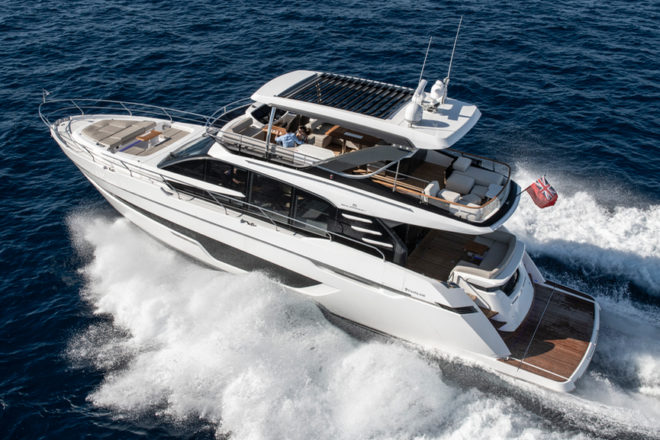 Fairline went back to the original buyer and offered to start working on a customised version of the Squadron 68 right away, so he could have it in time for the next cruising season. Everyone walked away happy.

The ability to build a boat that suits each owner is one of the key selling points of Fairline’s new model. The British brand’s smaller models are production boats with less room for customisation beyond wood and material choices.

“On the smaller models, it’s more personalisation rather than customisation,” says Moorhouse. “With the 68, we can do nearly anything, except move bulkheads or upset the centre of gravity and weight balance of the boat.” Offering such a high level on customisation on a boat under 24m is not something you see every day, but Fairline wanted the Squadron 68 to stand apart from others in its class.

The boat was designed by the Fairline Yachts Design Studio in collaboration with Italian superyacht designer Alberto Mancini and engineering by Dutch naval architecture firm Vripack.

The brief to the design team was to create a flybridge yacht that would be contemporary in style, yet instantly recognised as part of the Fairline family. The Squadron 68 has a powerful exterior stance and handles well on the water. 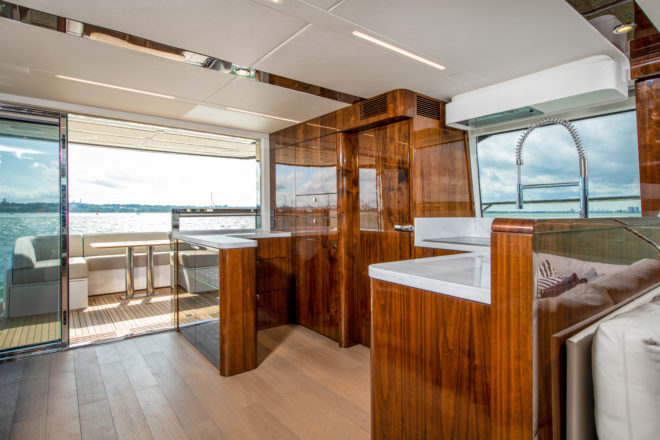 The interior starts with a large, well equipped galley, which includes a useful L-shaped counter that can be used for preparation, plating, serving or a bar “She blends perfectly with the current range of Fairline yachts, but with the feel of a considerably bigger boat,” says Wayne Huntley, Fairline’s Head of Design and Engineering.

“We’ve made the most of the space available and have used clever design touches to help the boat feel even more spacious and luxurious.”

Hull number one was sold to an existing Fairline customer who had a Squadron 50 and was moving up in size. The owners’ perspective was inherent in shaping the 68 and they were involved in the design process from the moment the layout was planned, influencing items such as the galley, which is located aft and to port in the saloon. 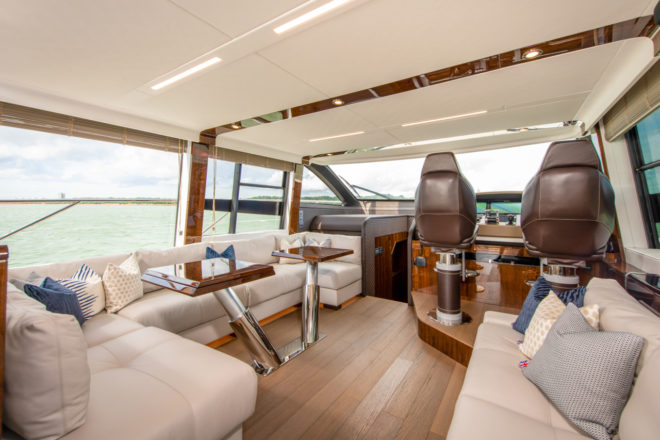 The owners also suggested the addition of an L-shaped counter that runs along the aft window and turns inwards. It’s the ideal place for meal prep and plating. And when the aft doors are open and the window lowers, it’s also easy to pass plates over for meals enjoyed on the aft deck.

Fairline modelled the 68 in virtual reality (VR), which allowed such owner input. The company was an early adopter of VR because the company didn’t want clients to have to wait 18 months before they saw anything in the flesh.

VR was used previously for the new F//Line 33, plus the Targa 45 and Targa 65. Allowing a client to have a virtual walk-through of the boat helps not just in the design process but also to sell boats. Moorhouse notes a New Zealand client who bought a Fairline after seeing it on VR.

The saloon on the 68 is open, with large picture-box windows and plentiful headroom. The flow is smooth, with a single-level floor on the main deck. There is a dining area to port, across from a sofa to starboard and a helm forward. 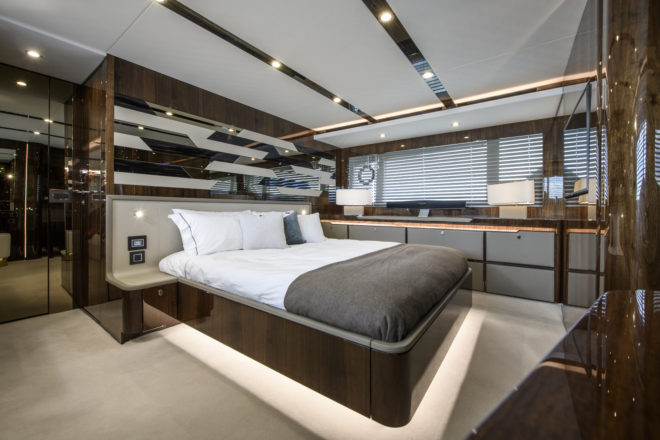 The impressive, full-beam master suite on a different yacht to the one shown on the previous interior photos, although both units feature gloss walnut woodwork

“The sofa can be detached and used as additional seating around the table, creating a highly sociable and flexible space, perfect for entertaining,” Huntley says. “This is a really neat design solution, which utilises the space highly effectively.”

Fairline has chosen premium materials to create the feeling of a more luxurious yacht, including lacquered, grain-matched timbers, high-grade leather and bamboo silk carpeting. Hull three has gloss walnut wood that complements the white Carrara marble countertops, which are honey-backed for weight savings. Acoustic-deadening materials help to make for a very quiet ride.

Headroom is generous with 2m of it throughout the boat, including the master on the lower deck. Hull three has three cabins and a day head, but an owner could choose to have four staterooms, trading the day head for a bunk-bed room. The master suite has a sofa to starboard, while the en-suite bathroom is aft of the bed and adjoins an impressive walk-in wardrobe

A great deal of flexibility is allowed, depending on an owner’s needs. For instance, the galley up is standard on the 68, but the owner of hull two, an Asian client who plans to use the boat for entertaining, chose three galleys – in the usual place on the main deck, on the lower deck in lieu of a day head, and on the flybridge, in an extended wet bar arrangement to create an al fresco galley.

Of course, customisations need to be nailed down early in the process, as Fairline still prides itself on being a production builder with a quick turnaround to launch.

“A client will need to come in pretty early in the build to make customisation changes as some parts are on a very lengthy lead time, and a big change in spec can clog up the production line,” says Moorhouse. A standard version, from mould to finishing, will take Fairline six to seven months. The hardtop features slats that can be partially or fully open, or completely closed

Up top, the flybridge is ideal for entertaining. There is a large u-shaped settee and dining table, and a wet bar area. I briefly sit at the helm, which has good visibility and seating for guests who want to mix with the Captain.

But at the other end of the flybridge, Moorhouse points out his favourite spot, a set of low-slung chairs which face aft. What a perfect place to take in the epic views of sights and coastline that you leave in your wake – just as Fairline hopes to do with the Squadron 68 competitors in its class of flybridge yachts.