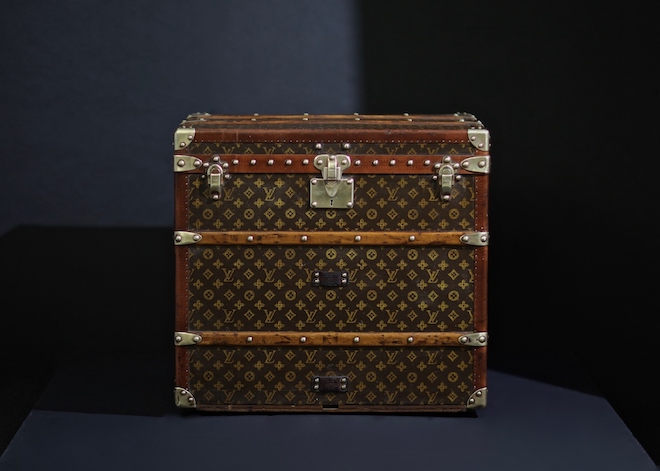 In an industry dominated by watchmakers of immense history and legacy, Lous Vuitton’s new Tambour Curve Flying Tourbillon Poinçon showcases the unexpected but not altogether surprising mastery of high horology’s youngest watchmaker. According to Diderot and D’Alembert’s 1786 edition of the Encyclopédie, their entry on coffretiers-malletiers-bahutiers defined malletiers as makers of traveling trunks, suitcases, etc.

In the 1830s, a provincial young Frenchman named Louis Vuitton travelled — on foot — 400 kilometre to Paris, (If this is not exemplary of Vuitton’s gumption and resilience, I don’t know what is) where he picked up the odd job of being an apprentice layetier, a servant with specific duties for packing luggage trunks for the well to do; and he did it so well, he attracted the attention of Napoleon III, who hired him to be layetier to his wife, Empress Eugénie. 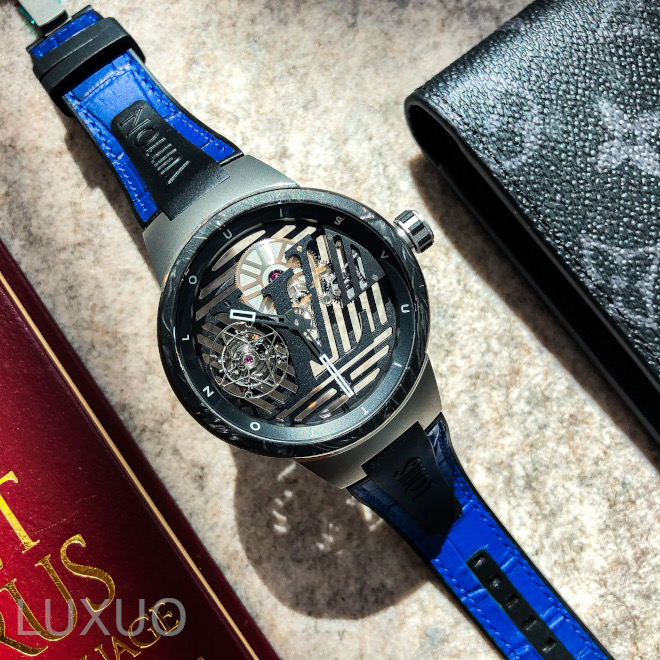 Vuitton’s experience as a royal layetier gave him insight into the considerable needs of the pre-modern elite traveller; by the time he opened his own trunk-making firm in 1854. His lightweight, airtight, and flat top, wooden frames covered in gray “Trianon” canvas trunks which facilitated stacking were hits with Parisian high society. More importantly, immensely functional (by way of peerless water resistance – important in the age of steamship travel), Louis Vuitton trunks were copied to such a degree that eventually they lunched their signature monogram checks 20 years later with the iconic LV motif and the four-lobed flowers inspired by Japanese culture – his creations were equal parts technical and aesthetic mastery. What does this have to do with the Louis Vuitton Tambour Curve Flying Tourbillon Poinçon you ask? Well, everything. 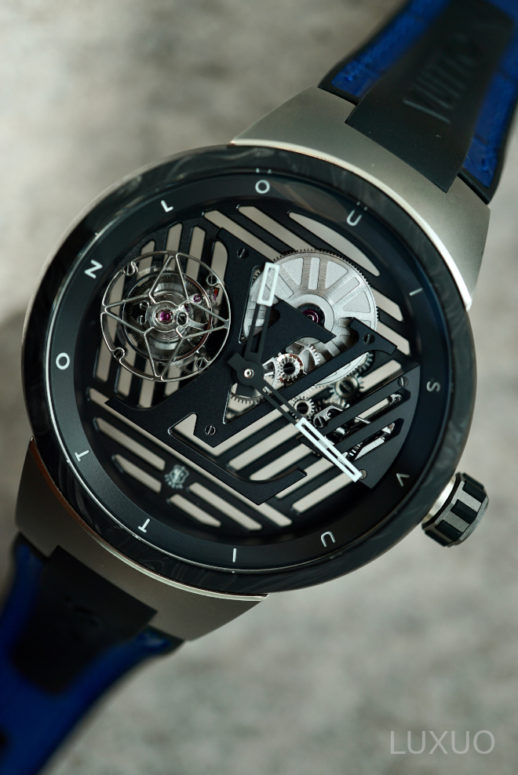 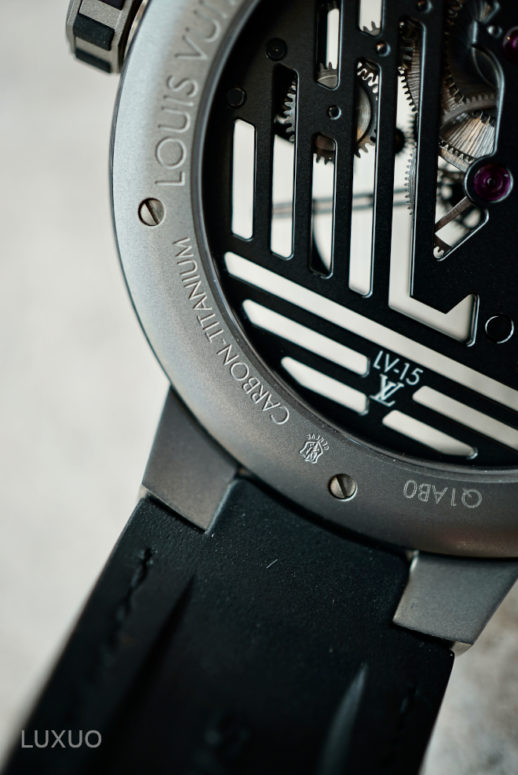 Louis Vuitton is playing catch up in the realm of high horology. Mr. Vuitton is no longer with us but the new Tambour Curve Flying Tourbillon Poinçon makes it readily apparent that his spirit and drive for innovation lives on. A more technical and aesthetically futurist interpretation of the original Louis Vuitton Tambour watch, the Flying Tourbillon Poinçon is the maison’s exquisite interpretation on an ultra competitive genre – luxury sports watches.

The openworked edition of the Tambour Curve Flying Tourbillon is constructed with ultra-lightweight, resistant technical materials commonly associated with aeronautics rather than watchmaking but what makes this lightweight Louis Vuitton ‘sports watch’ (they don’t call it that and personally i believe we are beyond labels at this point) truly special is that the outer part of the case is made from CarboStratum®, a composite material developed exclusively for the maison. 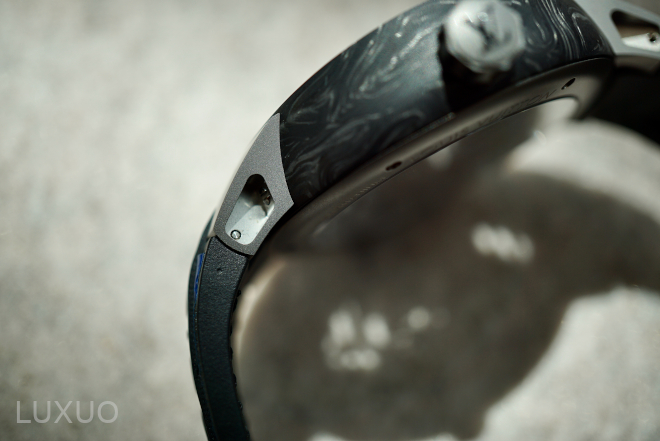 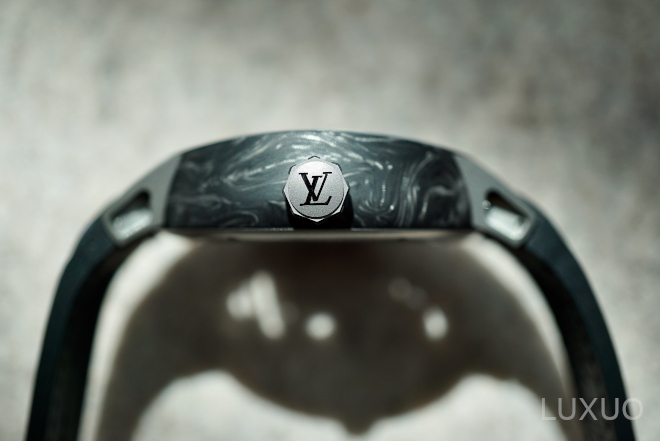 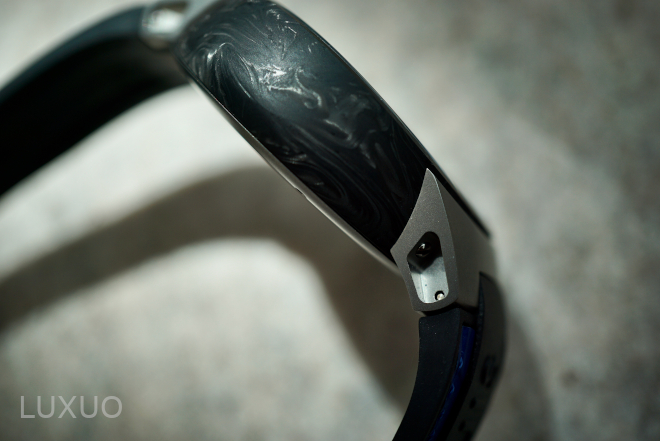 Here’s where it gets interesting Louis Vuitton works independently from the LVMH watchmaking division – that is to say, on occasion, LVMH watch brands Zenith, TAG Heuer and Hublot at one point or another, have depended on Research & Development specialists at a joint LVMH group watch manufacture for movement conceptualisation & design, and special materials but CarboStratum and the manufacture movement LV 108 flying tourbillon calibre was produced outside of the division. 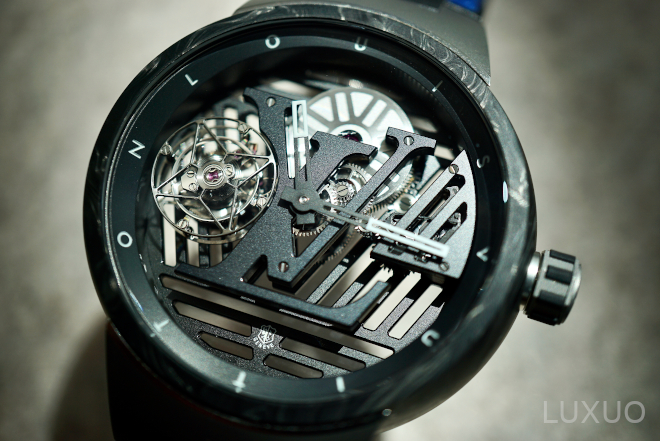 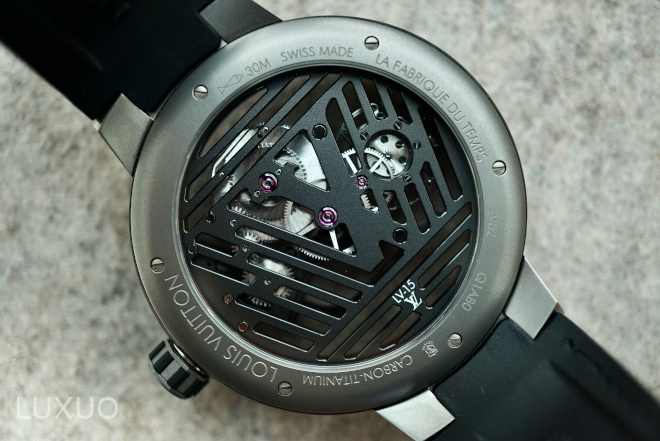 Working with material specialists, Louis Vuitton CarboStratum is produced by layering over 100 assorted sheets of carbon at random. The combined layers are then compressed at a controlled temperature. Once stabilised, this ultra-rigid material is then milled and then fitted over the grade 5 titanium base watch case.

What results is a 46mm timepiece with a visually unique and physically elongated case which gives the Tambour Curve Flying Tourbillon Poinçon its name. A convex surface enclosed in an elongated circle, the Curve Flying Tourbillon rises above ubiquity by deconstructing the circle to create its own shape; when viewed from the side profile, the caseband and mid-case reveals a continuous curve from one end to other while appearing round from above: the Tambour Curve Flying Tourbillon Poinçon de Genève follows the natural curve of the wrist, launching a new chapter in Louis Vuitton’s heritage of craftsmanship and with the elegant, dynamic architecture – the history of watchmaking as well. 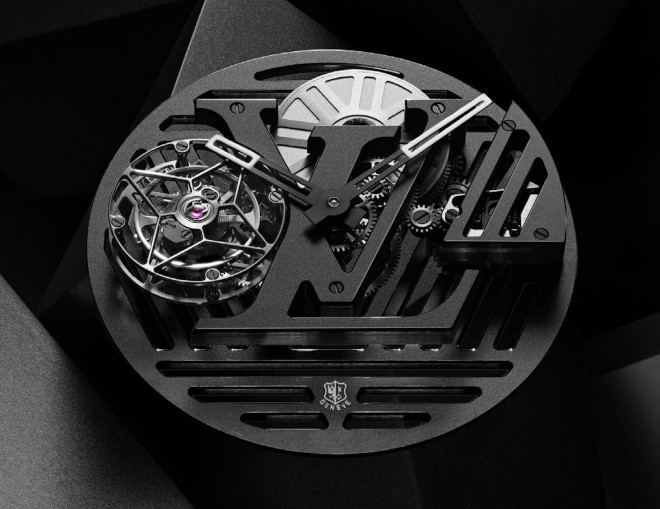 With minimal screws, the hand-wound mechanical LV 108 Calibre with flying tourbillon complication is a true ode of mechanical watchmaking. Designed and crafted by master watchmakers at la Fabrique du Temps Louis Vuitton, the geometric openwork of the construction draws the eye to the titanium tourbillon carriage.

Featuring 80 hours of power reserve, the titanium tourbillon carriage is inspired by the famed four-lobed floral motif of the signature Louis Vuitton Monogram. While the LV initials alone are masterfully yet subtly executed in the architecture of the movement, perfectly integrated through a skilful play and incorporation into the openworked bridges and executed with grained finishing and bevelling. 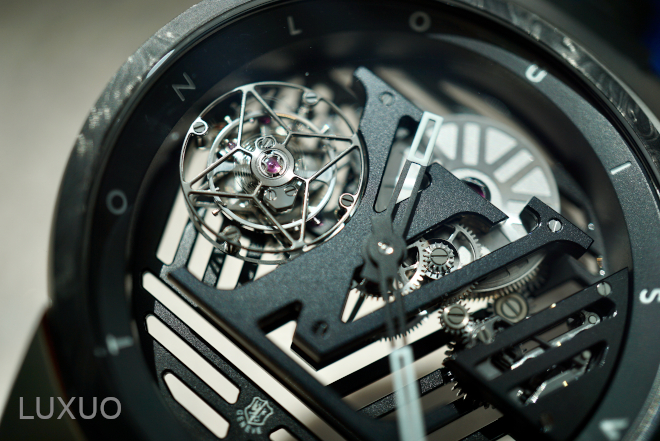 Long regarded as a benchmark for fine watchmaking, the  Poinçon de Genève  is regarded as one of the most prestigious certifications of origin, exquisite craftsmanship and technical reliability. These are the levels of exemplary perfection pursued by la Fabrique du Temps Louis Vuitton, that have enabled the new Tambour Curve Flying Tourbillon Poinçon to emblazon the famed shield at its 6 o’clock as well as its namesake. Each component of the movement is expertly finished to the criterion of haute horlogerie and hand assembled at la Fabrique du Temps Louis Vuitton, requiring  over 120 hours of work to achieve this level of technical excellence. 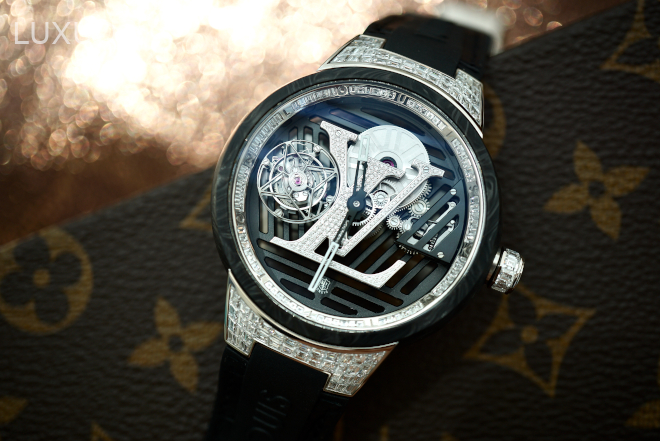 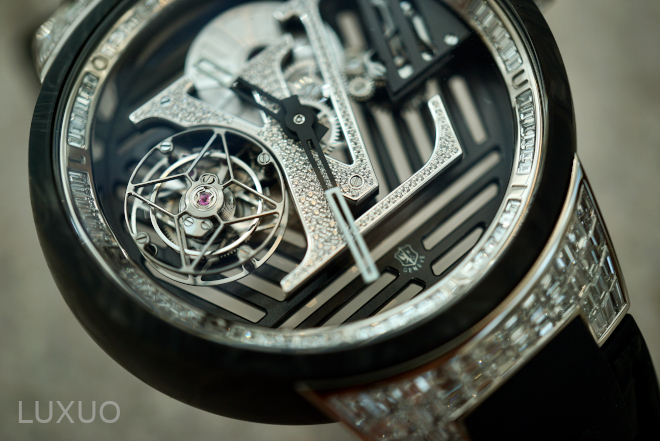 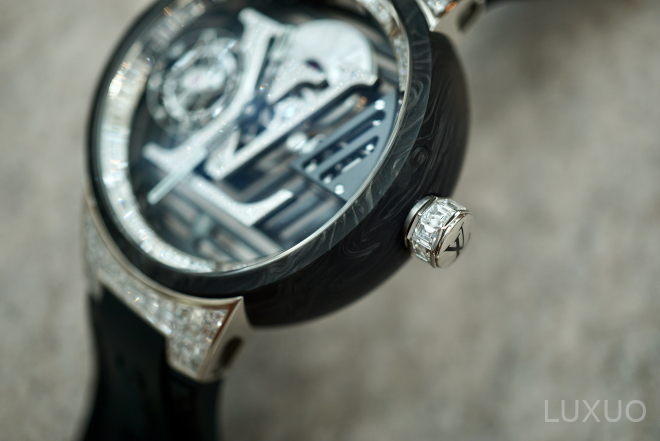 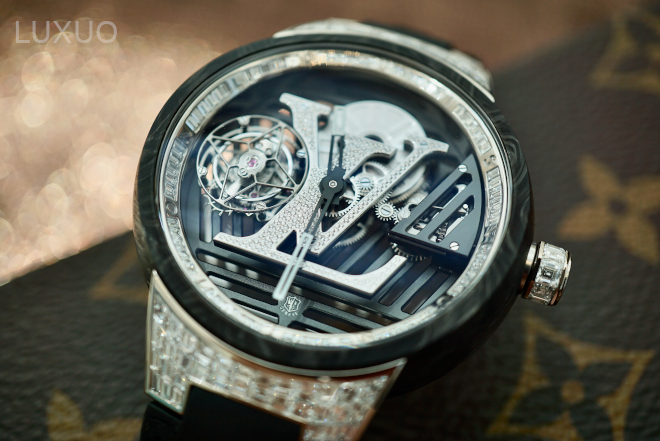 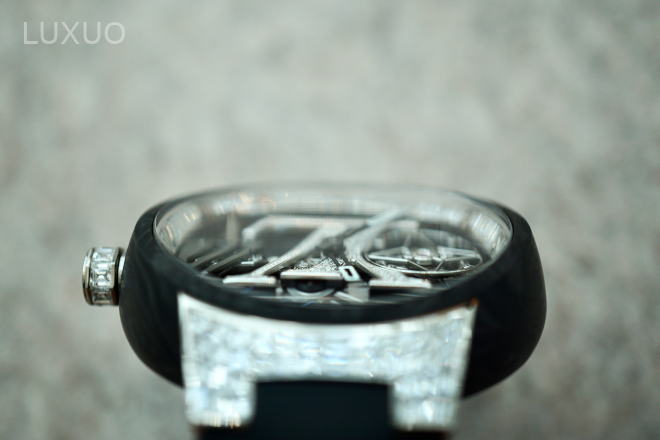 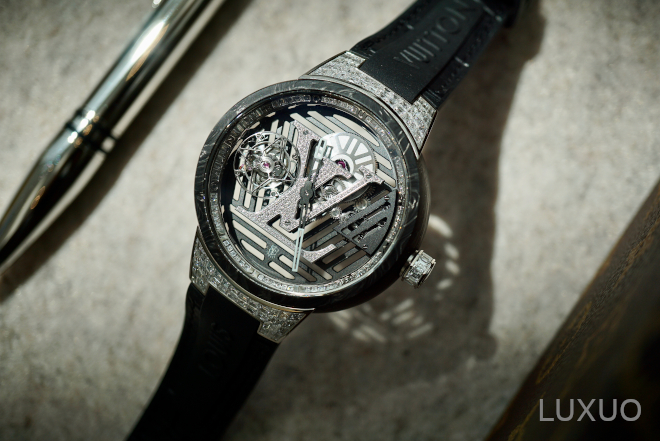