CL Yachts has boldly billed its CLX96 project as ‘the motor yacht – reinvented’. Hans Lo, the brand’s Deputy Director, more quaintly describes it as “workboat chic”, a reference to design traits like the reverse-angle windshields that can also be seen on tugboats produced by parent company Cheoy Lee, which has its head office in Hong Kong. The 96-footer is scheduled for completion by the end of this year and is set to start the second generation of models by CL Yachts, despite the brand only being formally launched in 2019.

Jozeph Forakis, the Milan-based industrial designer who created the logo and branding of CL Yachts, was chosen to design both the all-new CLX96 and the upcoming CLB88, which launched in late May and will have a world premiere at the Fort Lauderdale International Boat Show (October 28-November 1).

An evolution of the popular CLB72, the CLB88 has been pitched as the motor yacht ‘reimagined’, whereas all the talk of reinvention and revolution is focused on the CLX96. For the latter, Forakis started from scratch and wasn’t tied to any previous models, from inside or outside CL Yachts.

“We really wanted fresh eyes that could look at the motor yacht from a new perspective and shake things up,” says Lo, a fifth-generation member of the Lo family that has owned Cheoy Lee since it was founded in Shanghai in the late 19th century.

“We wanted someone who had never been in the industry and that’s what Jozeph offered. He is a recognised innovator across many industries and yacht design has always interested him, so the opportunity was mutually beneficial.” Both new models are being built in the enormous Cheoy Lee shipyard in Doumen outside Zhuhai, where Lo has been working since returning from Canada in 2010.

Born and raised in Hong Kong, Lo spent much of his early childhood at the Cheoy Lee facility in Lai Chi Kok. Even after his family moved to Vancouver when he was eight, he spent a lot of time at the shipyard during summer holidays in Hong Kong. “I grew up with it and spent many of my summers there, so it becomes a part of you,” says Lo.

“Working at the shipyard is both my privilege and my destiny,” he says, smiling. “It’s a rare opportunity to be able to apply my skills and experiences towards flourishing our family’s business.”

His first job was laying up fibreglass hulls. “I joined a crew and we laid up a hull from start to finish,” says Lo, who lives in Hong Kong but works in Doumen from Monday to Saturday. “I’d seen it happen before, but I’d never done it myself. It was a valuable experience.”

Lo joined at a pivotal time. Cheoy Lee was developing its futuristic Alpha series, working with legendary powerboat designer Michael Peters on naval architecture and exterior, and Luiz De Basto for the interior of the Alpha 76, which debuted in late 2011.

The CLX96, scheduled for completion by the end of 2020, has been drawn by industrial designer Jozeph Forakis, with naval architecture by Earl Alfaro

For a builder renowned for long-range trawler and expedition-style yachts, and series like Bravo and Serenity, the bold decision to embark on the modern Alpha range would prove pivotal in the later decision to create CL Yachts.

“Cheoy Lee started to look at a different type of yacht, creating express cruisers that could compete with brands like Azimut and Pershing. We came up with the Alpha series, which had very sporty lines, was very powerful and had a very efficient hull design,” Lo says.

“It looked like all the yachts you see in the magazines – sleek, sexy lines – and really appealed to me. I had just started working at Cheoy Lee, so it was a really exciting project for me. It was the first yacht I was ever involved with and it really fit the image I had in my mind of what yachting was all about. This project was my first opportunity to feel truly immersed in all aspects of the industry.”

As well as design, the company invested in a lot of new technology including electronically tinted and frosted windows, plus the ability to control and monitor all systems on an iPad, then a groundbreaking product only launched the year before the Alpha 76 premiered.

“Despite it being a strong product, we hit some unexpected hurdles and the entire endeavour turned out to be a great learning experience,” Lo says. “It wasn’t until later that I understood that the product was not the issue. What was a fantastic yacht instead became a stepping stone on our journey to establishing CL Yachts.” 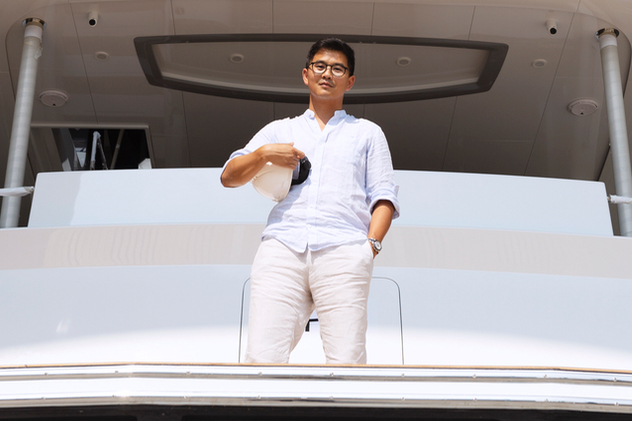 Hans Lo aboard a CLB72 at the 120,000sqm Doumen shipyard in Guangdong

Lo says he had been wanting to update Cheoy Lee’s image since he started attending US boat shows a decade ago. However, the decision to rebrand was only made in late 2017 when James Lo, one of Hans’ eight uncles working at Cheoy Lee, fed back to the other brothers after attending the Fort Lauderdale show following an absence of several years.

“It opened James’s eyes,” says Lo, whose uncle Martin Lo is Director of CL Yachts. “He really saw it was necessary to reinvent ourselves, to refresh and update ourselves. We got the green light to look at how we could change our image for the future.”

Lo, together with his cousins Simon and Karen, have carried on the family legacy at Cheoy Lee, which gave further impetus to look forward. “As the next generation, it was important that we put our own face on the company as we moved forward,” Lo says.

Reputation wasn’t the issue. Those who knew Cheoy Lee knew its boats as dependable, seaworthy, well designed and technologically advanced.

The brand was also still recognised by potential yacht buyers, but as an independent research firm confirmed, it was no longer front of mind after many international brands had made strong inroads into the US market.

The biggest problem was awareness by a newer generation who had spent most of their life consuming content via websites and social media. Word of mouth among yacht owners wasn’t enough anymore. “Cheoy Lee has always enjoyed a good reputation as a builder, but those who knew our boats were older and fewer. We have always believed a good product speaks for itself, and as a family business, we also had traditional values, one of which is you should never talk about yourself.

“Of course, this goes against marketing efforts in today’s age. We live in an era of social media and those rules no longer apply. In a society where consumers are bombarded daily with advertising, we could no longer afford to keep our mouths shut.

“At that point, it became obvious that we needed a holistic vision, one that brings branding, core values and product together under one direction, and so CL Yachts was born.”

Forakis, who studied at RISD (Rhode Island School of Design) in the early 1980s, was engaged as the Creative Director of CL Yachts and tasked to orchestrate the entire new branding and visual identity, while also setting out to design its ‘next generation’ of yachts.

CL Yachts’ first model, the CLA76, used the Peters-designed hull from the Alpha 76 but changed the superstructure, elongating it for more interior volume and a larger flybridge. Intan Nioridwan of Singapore-based Atolla Design, who previously worked for Malaysia-based Grand Banks, was chosen for interior design. The third CLB72, named I Did It…, was sold to a Hong Kong-based buyer

The CLB72 was the second model from the new brand. Howard Apollonio of Apollonio Naval Architecture was responsible for the concept and exterior styling, working with structural engineer Gurit to produce a RINA-certified, resin-infused composite hull.

The yacht hits 31 knots with twin Volvo IPS1350 1,000hp engines, while the interior was handled by Carmen Lau of Hong Kong-based Interiors by Carmen.

Both yachts were on display for the soft launch of CL Yachts at the Fort Lauderdale show in 2018 and have since been present at many other major US shows, with the CLB72 in particular enjoying solid demand – the yard was recently working on hull seven.

At the same time, CL Yachts was developing bigger models with Forakis, who was designing yachts for the first time in a diverse career that includes high-tech, mobile phones, furniture, interiors, lighting, accessories and much more.

From 1993, Forakis spent almost a decade working for the likes of Logitech, Swatch and Motorola. During that time, his designs included the ‘vertical’ Logitech Cordless MouseMan Pro, the Swatch Irony Scuba 200 watch and swivelling V70 mobile phone for Motorola, where he worked as European Design Director for three years. 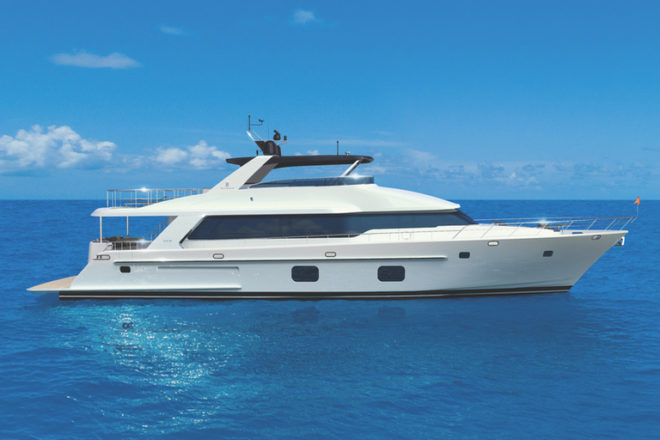 Forakis is the designer of the CLB88, scheduled to premiere at Fort Lauderdale

In 2002, he founded the Jozeph Forakis Design studio in Milan with a satellite studio in New York, his birthplace and where he had been involved in art and theatre.

As well as Swatch, his company’s clients have included Samsung, LG Electronics, Yamaha Motors, Epson, Swarovski, Tecno, Magis and Foscarini. The permanent collection of the Museum of Modern Art (MoMA) in New York houses the Havana floor lamp he designed for Foscarini.

Lo says CL Yachts decided to take a chance on a first-time yacht designer because of Forakis’ understanding of the brand and the breadth of his experience, from big-picture business strategy to meticulous design details.

“He really dived deep into the project, studying the entire industry from the ground up – our competitors, how people use yachts, what people respond to.”

Forakis’ work will first be seen on the four-cabin CLB88, which Lo says is designed to “remain a classic motor yacht”, although unusual features include a full-beam master suite and a neighbouring VIP suite that’s also full-beam and a similar size. 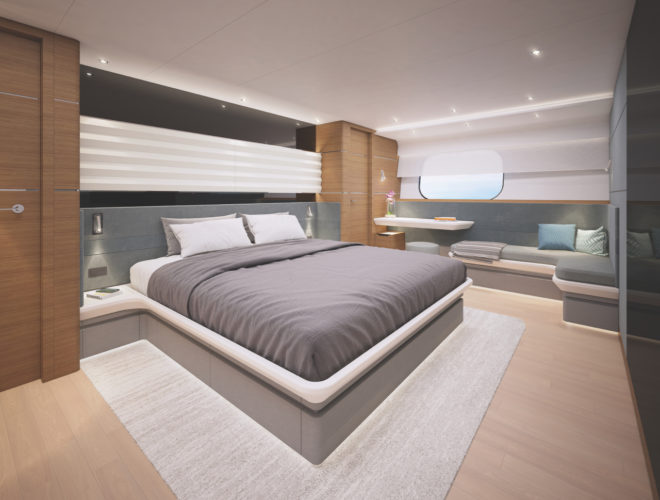 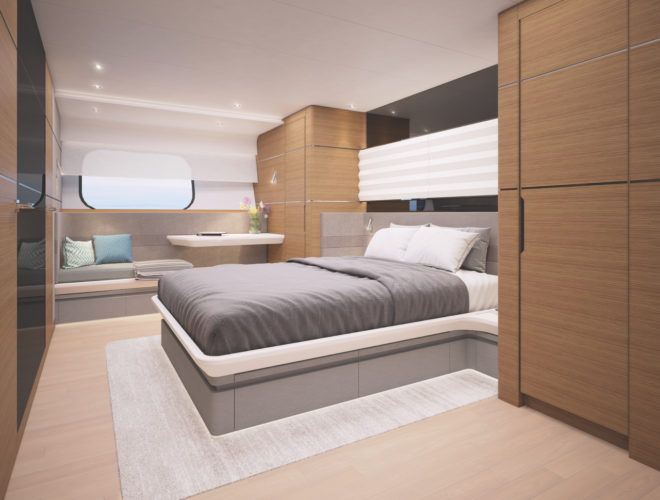 However, the ‘X factor’ has been saved for the CLX96, which Forakis has designed with American naval architect Earl Alfaro, who worked under Tom Fexas and on many Grand Banks models.

“The CLX96 really represents the CL Yachts brand and our core DNA. The strength of our company lies in the fact we are a builder of both luxury and commercial vessels, and that’s really reflected in the reverse-angle house, which is used on tugboats for practical reasons,” says Lo, who also points out that the reverse-angle house has dramatically increased the size of the flybridge.

Other distinct features include a plumb bow and an enclosed flybridge that houses the sole helm station and has opening windows. Also notable is that the hull gradually widens from the stern towards the bow, so the full-beam master suite on the lower deck is situated forward, at the yacht’s widest point.

There’s much more including an extendable beach club, transformable cockpit sofa and an innovative foredeck, which has a beautifully designed, circular arrangement of adjustable tables and sofas, and is named ‘Piazza Del Sole’.

“Everything sounds better in Italian,” laughs Lo before admitting his pride in the company’s flagship-to-be.

“The CLX96 is built based on our idea of uncharted luxury. Its lines evoke strength, adventure and a hunger for exploration. It really is the essence of CL Yachts, distilled into one product.”