Considering the Leopard 53 PC only made its world debut in Miami in February, Asia’s importance to the brand is illustrated by the fact a highly-specced, three-cabin owner’s version was delivered to Raffles Marina on Singapore’s west coast by March. 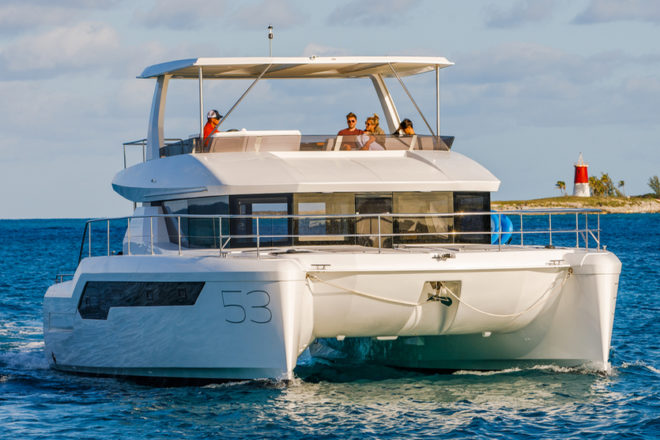 It’s especially notable considering the model will only be offered by sister company The Moorings as a charter yacht from June, starting in the Caribbean. The Moorings version is known as the 534PC (53ft, four cabins), but is basically the same model as Leopard’s 53 PC, which is for sale with either three or four cabins.

South Africa’s Robertson & Caine has been building catamarans for The Moorings charter company since the late 1990s before also producing personalised, Leopard-branded versions for private ownership.

As Leopard celebrates its 20th anniversary this year, the 53 PC joins the 43 PC and four sailing models in the current range, and kick-starts what the brand describes as its fourth generation of catamarans.

Kit Chotithamaporn, Leopard’s Yacht Sales Manager – Asia, believes the 53 PC is a worthy successor to the 51 PC, which the company describes as the most successful powercat of all time, with 137 units sold since 2013, including a dozen to Asia. 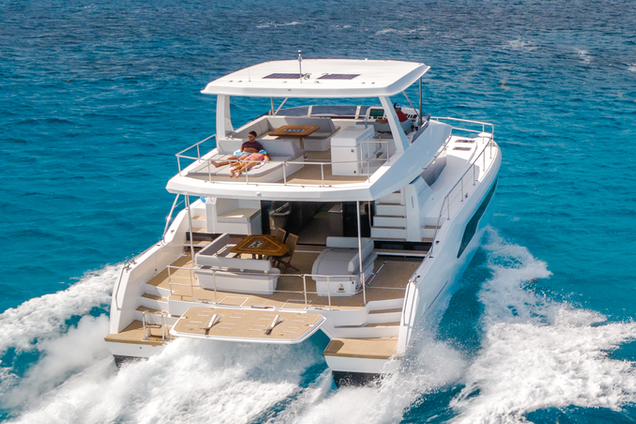 The cockpit features a lounger, corner sofa, table and chairs, while the flybridge has aft sunpads, a lounge and forward sofa

“The Leopard 51 PC was a well-designed, high-performance powercat that has been successful in Asia,” said the Phuket-based Thai. “The new 53 PC has improved space, luxuries and amenities, so should have the same popularity with potential buyers.”

The Simonis Voogd naval architecture and yacht design studio – which has offices in Cape Town and also the Netherlands – was told that the new model was “to be bigger, better and faster, but use the same engines” as the iconic 51 PC. It was a tall order.

The good news? Whereas the 51 PC was required to offer the same interior options offered on the Leopard 48 sailing catamaran, this time the designers started with a clean slate, with no requirement to tie in the interiors with any existing models.

As such, Simonis Voogd rebooted the entire design, lengthening and refining the hull, and creating an enlarged superstructure, offering Leopard more flexibility to design an improved layout. The result? A total of 218.5 cubic metres of space, a dramatic 31.1 per cent increase in volume from the 51 PC. 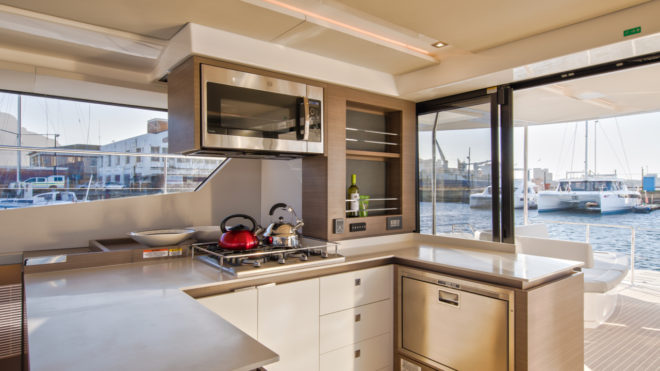 The starboard side of the large two-sided galley

Designer Alex Simonis says the design shift on the brand’s new flagship powercat ‘is more radical than others that are merely evolutionary’, a sentiment echoed by Franck Bauguil, Vice President of Yacht Sales & Product Development, who describes the 53 PC as ‘an evolutionary change in the Leopard powercat range’.

Visiting the Leopard 53 PC at Raffles Marina, the new design is evident from the electric swim platform, which holds a dinghy, and the walk-around cockpit, which in contrast to the 51 PC, makes the most of the 25ft beam to create a large socialising zone.

Both sides are clear as they feature 6ft-long, 4ft-wide deck hatches for access to the large engine rooms, which have good space for two or even three people to work.

The creative fitted furniture features an aft-facing chaise longue with an L-shaped backrest that’s almost mirrored by a large two-sided corner sofa, which sits around an interestingly shaped table – imagine a square with one corner cut off diagonally. 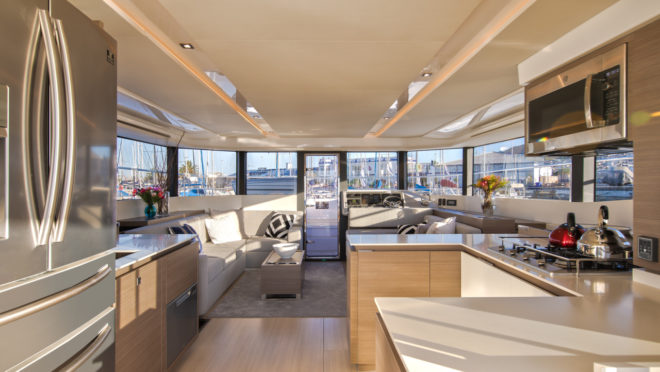 The enormous fridge is on your left as you enter the interior; the foredeck door is straight ahead, connecting the length of the yacht

The two central doors slide behind the outer ones to enable entry to the huge saloon, which starts with an impressive walk-through kitchen.

To starboard is a large C-shaped Staron worktop, four-hob Miele cooker, stacks of drawers and cupboards, a microwave at head height and a useful two-level rack in the corner for bottles, sauces and herbs.

Behind the cooker is an extra sliding-top freezer. However, it’s the enormous two-door Samsung fridge-freezer to port – with ice-maker and water dispenser in the left-hand door – that really gives the galley a ‘home kitchen’ feel. Beside it is a sink, storage/drying racks, bin and dishwasher.

Step forward and you get a better feel of the fantastic windows all around the saloon, with the see-through foredeck door increasing the feeling of space and connectivity to the outside. And the headroom throughout the main deck is really impressive. Overall, it’s a much more modern, roomy interior compared to previous Leopard powercats. 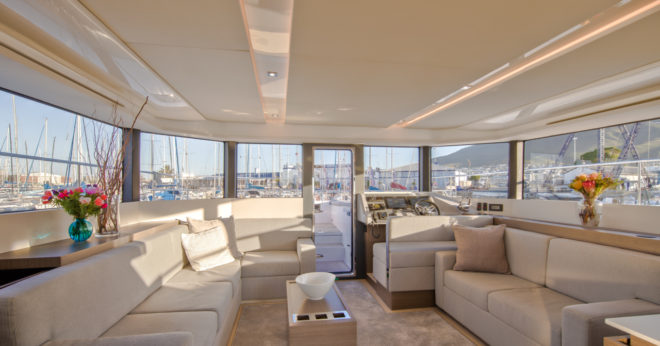 The well-lit saloon features carpeting; the latter is one of many options on the first hull in Asia, such as a foldable dining table instead of a coffee table

The open-plan lounge features a long, L-shaped sofa to port and a folding dining table. Across to starboard is a two-seat sofa, behind which is a hidden TV that can be electronically raised and lowered, plus built-in phone chargers.

For the first time on a Leopard powercat, there’s an interior helm station, where an interactive touchscreen screen controls and monitors of all the onboard systems including lighting, air-conditioning, fuel tanks, water tanks and much more.

“The indoor helm station and amplified interior space, especially in the saloon and galley, are examples of the motoryacht-type features this has compared to previous Leopards,” Kit says. “And this unit is very highly specced, with all the luxuries an owner in Asia may need.” 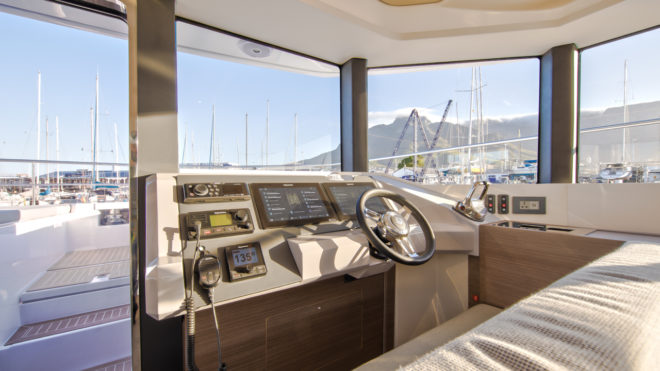 Typical of Leopard, the standard layout includes the forward saloon door, which leads to a foredeck featuring two adjustable sunbathing mattresses either side of the central steps, while the corner tables fitted to the handrails are a nice touch. As per the options, there’s a crew berth in the port forepeak, with head and shower in the starboard one.

The huge flybridge is billed as ‘the heart of the boat’ and it’s easy to see why. The starboard stairs – which can be covered by a see- through hatch – bring you to the helm station, while the port side features three separate social areas, starting with a forward-facing sofa beside the helm.

The heart of the flybridge itself is a square dining table and large C-shaped sofa that faces a big wet bar with grill, fridge, freezer, sink, storage and bin, yet I had the feeling this area could prove a bit of a ‘pinch point’ when people are cooking or watching the chef in action.

Most of the flybridge is covered by a solid hardtop, although sun worshippers can get their dose of vitamin D on the triple sunpad aft, beside which is enough space to roll out a couple of yoga mats. The enormous flybridge is a key reason why a local charter operator thinks the boat could carry over 35 people for a day cruise. 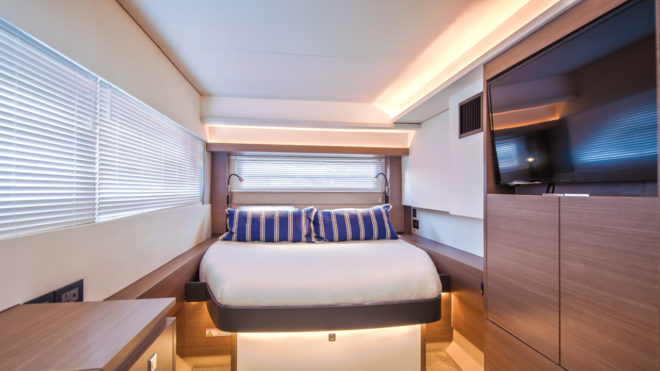 The master suite features a forward-facing bed towards the aft end of the starboard hull, separated from the engine compartment; forward of the bed is a vanity table, sofa and enormous storage (below) 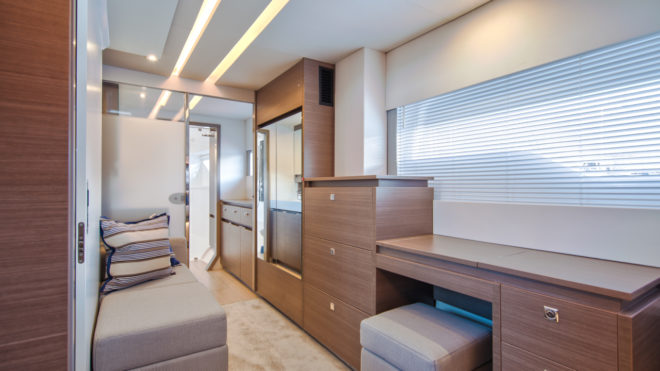 Meanwhile, the accommodation is accessed by stairs on each side forward of the galley, with both hulls benefiting from long and large windows, plus several portholes. The model in Singapore is the three-cabin owner’s version, which has the master suite occupying much of the starboard wing.

The bed is aft and looks forward to a cupboard and sofa on the left, with a vanity desk and drawers below the window and a double wardrobe. Further forward is a dressing room/bathroom with more drawers, his-and her-sinks, large wall cabinets and a big walk-in shower.

Guest rooms in the port hull comprise an aft cabin with forward-facing bed and a forward one with a window-facing bed, and both are also very comfortable and elegantly designed, with en-suites. The four-cabin version has the same cabin layout in both hulls. On both versions, the port hallway features a washer/dryer, next to the instrument panel. 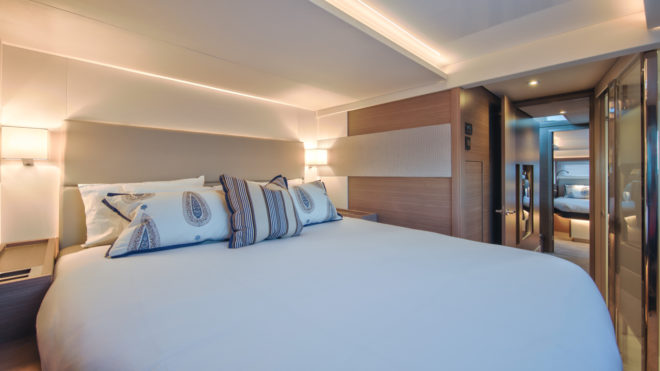 The forward (above) and aft (below) guest cabins in the port hull, which has a washer/dryer in the hallway 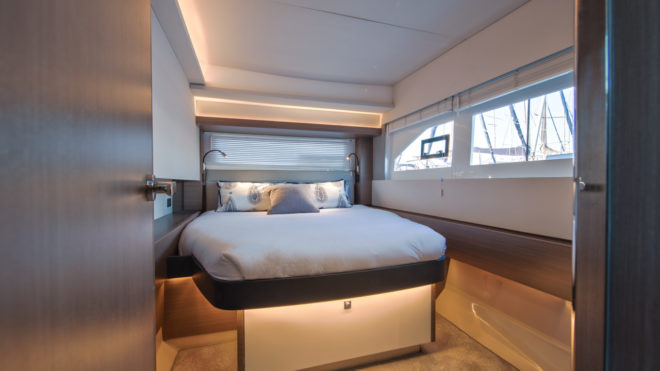 While we’re here, it’s worth noting that one of the key design changes from the 51 PC – and why the 53 PC is 2ft longer – was the relocation of the Yanmar engines from under the aft beds to separate compartments further aft, so reducing noise and vibration in the guest areas.

Simonis Voogd also refined the bow section of the hull to reduce spray, developing a more efficient stern section to better carry the aft-positioned engines. It was all part of the designers’ challenge to create a bigger, better and faster boat than the 51 PC, while using the same engines.

After all, the 51 PC had a good thing going with the 8LV range from Yanmar, which worked with the purpose-designed hulls and a flow-optimised tunnel design around the drive train to produce a top speed over 24 knots and a cruising speed of 17.

The 53 PC is listed as having a top speed of 24-25 knots and a cruising speed of 17.5 and it compared well to its predecessor in early tests. 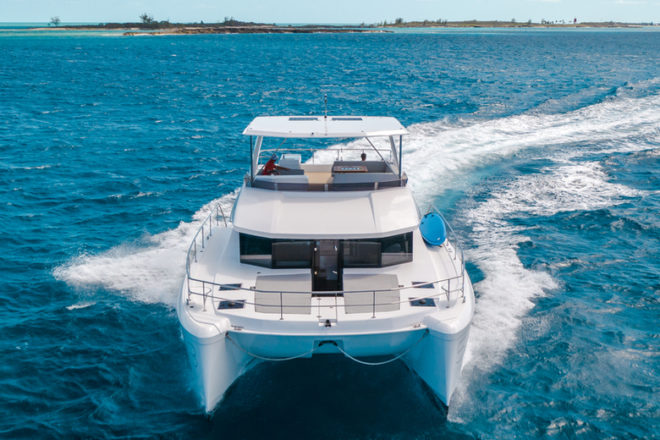 In ‘light ship’ sea trials, a fully specced 53 PC weighing 22.5 tonnes was faster than a basic-model 51 PC (19.4 tonnes) through most of the rpm range except at full power, where it was marginally slower – despite being over three tonnes heavier. Results were similar in ‘half load’ trials, where a full-spec 53 PC (25 tonnes) matched or bettered a basic 51 PC (21.5 tonnes) aside from at top speed.

Simonis says these remarkable results are due to the 53 PC having a far more streamlined superstructure than the 51 PC, which had a sunken foredeck cockpit shaded by a flybridge overhang.

“The explanation that these numbers could be achieved with the same engines is that we managed to reduce the drag and windage sufficiently to make up for the difference in weight. The window sections have lower drag due to their aft sloping side, while the 51 PC had the extending eyebrows above the forward cockpit,” Simonis said. 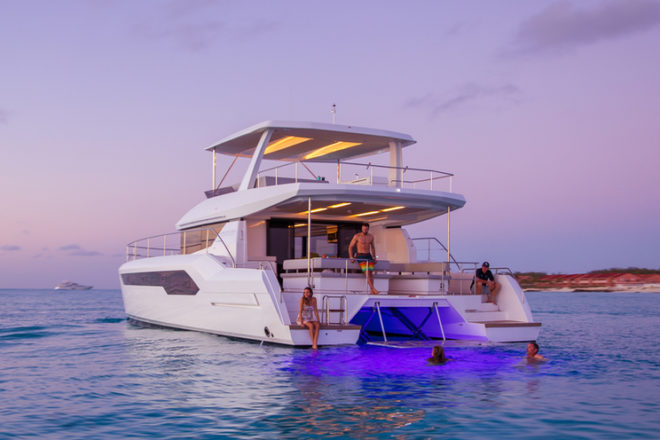 The swim platform can be lowered below water level; the ladder is to port

“Another nice aspect of the efficiency gain is that the speeds have improved in the engines’ mid-range rpm (2,500-3,500), the cruising speed range it will operate in most of the time.”

Furthermore, with 2,200 litres of fuel, the 53 PC has an impressive range of 1,300nm with two engines and 2,000nm with one, the latter often used when Leopards are delivered ‘on their own bottom’ from South Africa to their owner’s home port.

Leopard has been renowned for its fuel efficiency since launching its first powercat, the 47 PC (precursor of the 51), and describes the 53 PC as up to 50 per cent more fuel efficient than monohull motor yacht counterparts. 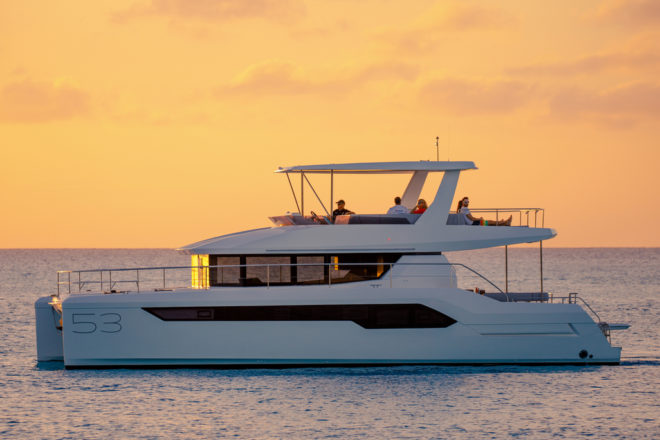 Although Leopard produces roughly three times as many sailing cats as motor yachts, Kit confirms powercats are more popular in Asia and expects the 53 PC to continue the brand’s success in the region.