The cover story of Yacht Style Issue 47 focuses on the vast array of sailing and power catamarans in today’s market, from France and around the globe. 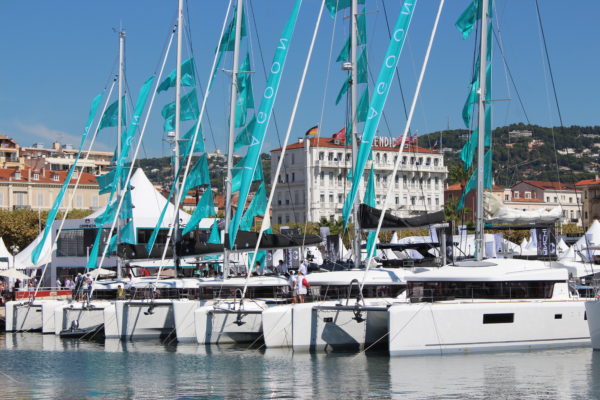 Spaciousness can mean three levels of living spaces if a flybridge model is chosen, while hull specialisation in powercats means these boats are increasing in efficiencies, with some models offering semi-displacement modes for higher performance.

For sailing catamarans, a significant trend is the increasing performance of cruising boats, as witnessed by the world’s largest builder – Groupe Beneteau – bringing out its new Excess brand.

For speedsters, developments in foils dominate the high-performance boats while increasingly automated systems allow bigger multihulls to be managed by fewer people, even down to an experienced couple who want the luxury of a floating apartment without the fuel bills or loss of privacy that crew bring.

The headliners among the big sailing cats launched over the last year include the stylish Sunreef 80 from Poland that I enjoyed helming along the Riviera, the truly glamorous Alegria 67 from French builder Fountaine Pajot, and the fast McConaghy MC60 from the renowned Australian-owned builder with a big production facility in China. 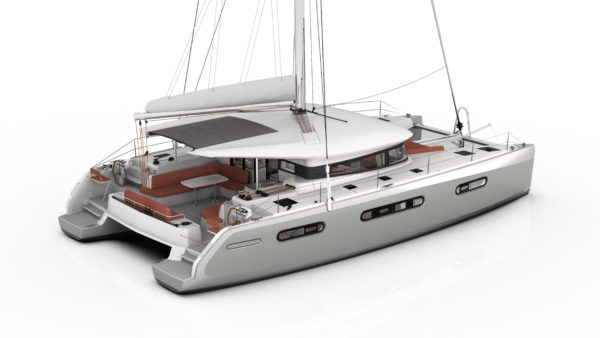 The Excess 12 and 15 (pictured) will launch at Cannes

Another major development is Excess, an entirely new catamaran line from Groupe Beneteau designed by VPLP (Van Peteghem, Lauriot-Prevost). Intended as a sportier version of market leader Lagoon, the new brand will debut at this year’s Cannes Yachting Festival in September with the Excess 12 (38ft) and Excess 15 (48ft), to be followed by the 11, 13 and 14 models.

So, it was interesting to meet up with the prolific design duo, Marc Van Peteghem and Vincent Lauriot-Prevost, to discuss the multihull scene and specifically their Excess designs.

“Most catamarans are centred around being comfortable, while there are also extreme-performance versions, so we conceived Excess as being in the middle ground between them,” Van Peteghem told me at this year’s International Multihull Boat Show at La Grande Motte.

Boat shows are an ideal place to explore new vessels and quiz their builders, so the Singapore Yacht Show in April and the big European ones are good indicators of where the market is heading. 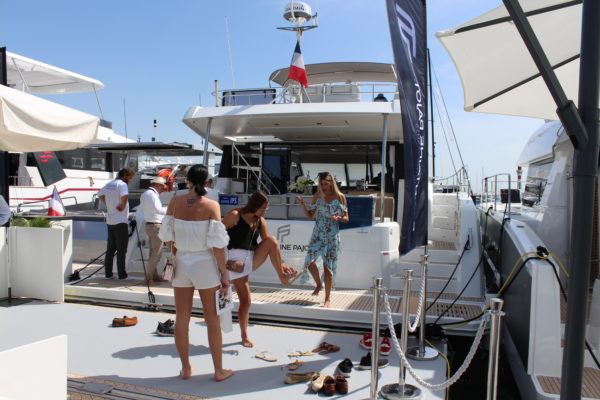 The beating pulse of multihulls is most acutely felt at the sector’s largest show at La Grande Motte, near Montpellier on the south coast of France. It’s an event I attend annually to meet with designers, builders and buyers.

This is ground zero for the multihull industry which France dominates, representing 75 per cent of the global market, with about 850-900 boats annually from giants Lagoon, Fountaine Pajot, Catana (Bali) and others. Only South Africa’s Robertson and Caine, builder of Leopard catamarans, is a serious contender, although China-based Aquila is now building almost 100 powercats a year.

This year the Bali 4.3 MY power catamaran was among the premieres at La Grande Motte, where her bigger sister, the 5.4, was crowned 2019 Multihull of the Year (40-50ft). Having sailed the Bali 5.4 for 400 miles during a delivery last year, I found it a comfortable and functional boat with the brand’s renewed emphasis on performance proving successful. 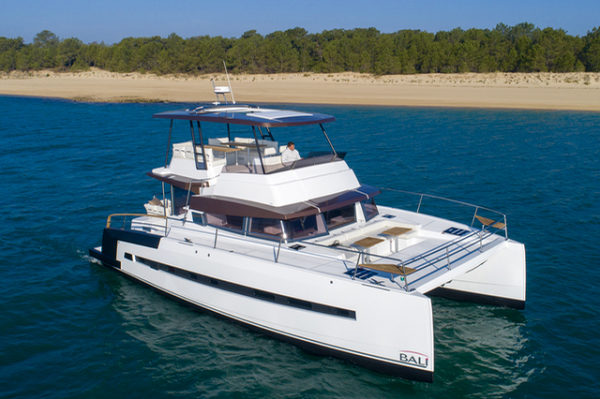 The Bali 4.3 MY powercat exhibited at La Grande Motte and is on its way to the Philippines

Another winner was the 40 Open Sunreef Power that took out the power catamaran award. Inspecting Sunreef’s brand-new 60 sailing cat at La Grande Motte again confirmed for me the high standard of finish and engineering on these Polish-built yachts, which have also made good headway in Asia.

Interestingly, Multihull of the Year (under 40ft) was the niche sailing trimaran from Danish builder Dragonfly with its redesigned 32 model. Given that trimarans are the fastest vessels on the planet, the 32 is an ideal starter boat for those with a need for speed.

Powercats are a definite hit with the global buyer and Fountaine Pajot’s new MY40 – launched at Boot Dusseldorf in January – earned a lot of attention in Singapore as it has four large cabins and a flybridge, backed by the builder’s vast experience in building powercats that few yards can match. 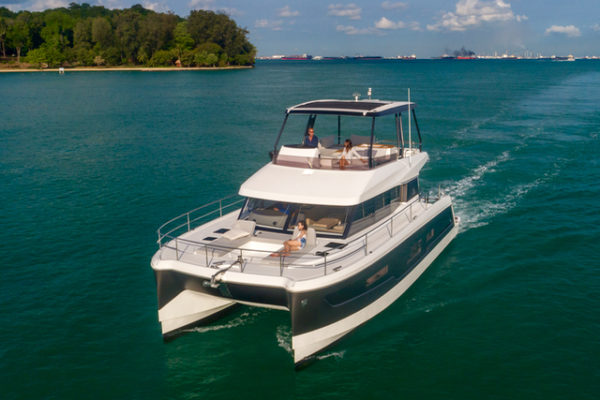 The new Bali 4.3 MY powercat cruises around Singapore

The brand’s new 45 sailing catamaran will make its world debut at Cannes this year and feature a semi-flybridge that ensures the steerer is secure yet creates a third level of lounging space when at anchor.

Conventional diesel power will end one day, so renewable energy, and hybrid power, as found on the Silent 55 that also made its Asia debut in Singapore is leading this trend. Having sailed several of these Silent models over the years, I’ve witnessed the development in lithium-ion battery technology and massive increase in solar-cell efficiencies shown on these Austrian-built boats.

A Lagoon Seventy7 sailing catamaran was even on display in Singapore on its way to China, two years after the model’s first-ever hull made its way to its owner in the Philippines, confirming that Asia has a big appetite for the larger models.

Gossip on the marinas is that Lagoon’s 630 powercat will be replaced by a new 60, which, given the strong fan base of the former, should interest those who enjoy superyacht features at production prices. 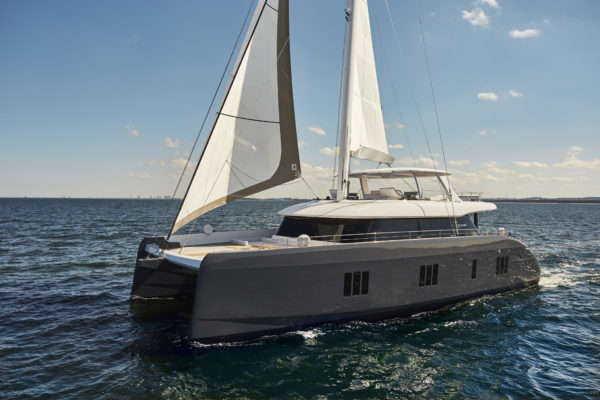 The Sunreef 80 that dominated the multihull display at Cannes last year ticks many boxes for a sailing catamaran and I found it an interesting boat to take to sea. All navigation takes place on the flybridge, electric winches ensure the large sail area is manageable and twin helms let the steerer see across the vast foredeck.

The saloon is devoted to entertaining as the galley and crew quarters are below in the aft part of the port hull. Opposite, to increase privacy, the owner’s suite shares the starboard hull with a forward guest cabin, with a third double in the port hull.

Customisation is a key selling point for Sunreef, so owners can specify their own décor and an alternative layout with galley upstairs. The aft deck is sheltered by the flybridge overhang with wide steps leading to the water on each hull, while the bow area is another voluminous lounging space. 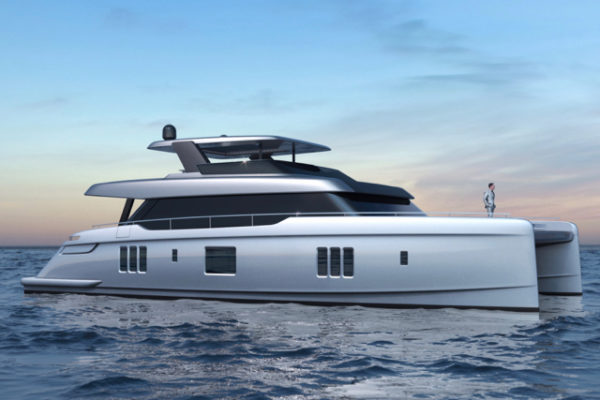 Sunreef plans to premiere its 80 Power at Cannes in Sweptember

Auxiliary power comes from two 225hp engines plus bow thruster and optional tankage (6,000 litres), which make the 80 ideal both for bluewater sailors and shoreside entertainers. In light winds, I alternated between both headsails and full main to push the big cat along. All lines ran easily and the only reason to leave the flybridge was to trim the genoa, which was at deck level.

She felt and looked like a superyacht and there’s more to look forward to as its sister ship, the 80 Sunreef Power, will debut at Cannes this September. It shows a much sleeker profile than earlier models and will have an immense flybridge for elevated navigation and a lounge with spa pool.

Sunreef has also revealed a concept for a 120ft power catamaran, which has been designed in-house to meet the growing interest for multihulls in the superyacht segment. Inspired by the supercar industry, the lines of the 120 Sunreef Power are both elegant and sporty, with numerous chrome elements and LED accents. 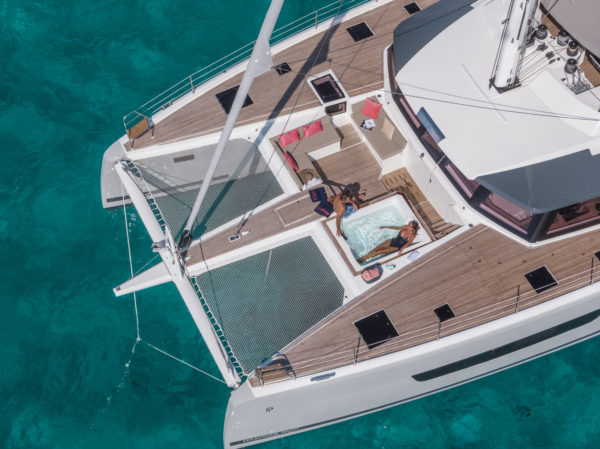 Not to be outdone, Fountaine Pajot had its own new grand bateau at La Grande Motte, showing an Alegria 67 after the model made its Asia debut at Singapore earlier in the month.

“We wanted to build a floating five-star hotel,” Helene de Fontainieu told me as we walked around her company’s flagship catamaran.

They have succeeded, especially when you consider the jacuzzi on the vast bow cockpit and the highly functional flybridge navigation area with twin helms and lounge. The 63-footer is ideal as a crewed vessel because of a commercial-standard galley in the hulls and the dedicated entertaining space in the saloon. Good news for petrol heads is that she comes in a powercat version as well, with twin 300hp shaft drives. Note: Part 2 coming soon

Email [email protected] for print subscription enquiries or subscribe to the Magzter version at: www.magzter.com/SG/Lux-Inc-Media/Yacht-Style/Fashion/