Kevin Green concludes that the two-cabin Aquila 36 powercat is fast, fun, family friendly and versatile, with layout and hydrofoil options

First impressions can be startling. And so it was when I came upon the Aquila 36: strong yet smooth aesthetics, with raked back lines, a low profile and some hull overhang that maximised deck space. 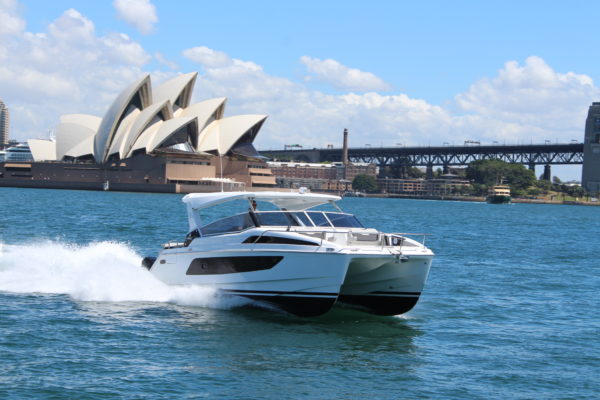 The Aquila 36 was reviewed in Sydney

As I took it all in, I quickly realised deck space was the key selling point of this boat. All the deck space could be used as seating – it’s CE rated for 26 people – while the final accolade revealed itself in the two double cabins.

The Sino Eagle shipyard in Hangzhou, southwest of Shanghai, has been building Aquila power catamarans since teaming up in 2012 with MarineMax, a US-based charter company and dealer.

As the world’s largest powerboat dealership, MarineMax was able to put together a formidable design team led by the experienced J&J Design Group, which, with its development arm Seaway, has worked on designs for Azimut, Bavaria, Beneteau, Dufour, Elan, Jeanneau, Monte Carlo Yachts and more.

The American-Chinese partnership started with the Aquila 38 for MarineMax’s new charter business. Fast forward to the present and the yard has the 44 and 48 flybridge powercats, the 36 and the new 32 unveiled at Miami in February, and is represented in Southeast Asia by Simpson Marine.

The 36’s open-style topsides can be optionally enclosed for more temperate climates – and there are several model options – but for tropical waters, the Sport model I reviewed had an ideal layout.

Featuring a large spray screen over the steering console, supported by two fibreglass bulkheads integrated into the gunwales and alloy struts forward to attach the composite bimini, it gives a clean profile while maximising visibility. The open design integrates the saloon with the cockpit

Beneath was a functional layout with L-shaped seating and table to port, just across from the wet-bar, while the steering console is given plenty of space on starboard with a double seat.

The transom has more seating and a sunpad and there’s ample room for guests to move about.

Boarding is via two doors on each side so ideal for unloading a busy charter boat or mounting side ladders for a dive party. The wet bar has a deep sink, icebox and small fridge beneath with optional hot plate to complete the casual galley arrangement.

Spacious decks are clad in synthetic SeaDek, a slightly spongy covering that reduces heat and deadens sound while giving a good grip.

Looking aft, the swim platform has to be central due to the outboards which rather complicates its use as a dive platform, especially as it’s fairly high, but an optional dive ladder is available and for total safety (in dive mode), I’d fit prop guards. There’s a fresh-water shower at the transom and handy locker, but I’d prefer guard rails on each side. 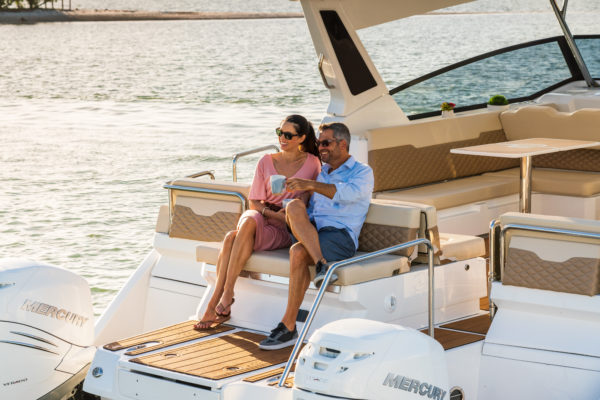 With no side decks, access to the bow is via a door through the forward saloon which reveals a large and deep cockpit – so safe at speeds. I sat there in bow rider style while my host Jake steered. I experienced very little moisture, but should spray land, there are large scuppers.

This area is a major feature of the Aquila 36 as it has a double sunbed, moveable chair backs and a wide space that only catamarans can offer. Special touches include drinks holders with LED lighting – and further bling is available with underwater lighting.

Practicalities aren’t neglected. There are two sets of retractable cleats, vertical electric Quick windlass with manual over-ride and sealed chain locker, all surrounded by a stainless guardrail. There’s also storage beneath several bulkheads and the cockpit sole has a large locker that drains the outboard. Also, sunshades can be optioned for both the bow and stern decks.

The symmetrical cabin layout has the bed forward and bathrooms aft with a sliding door for privacy. The rather spartan décor – bare gelcoat and plain vinyl – is easy to clean while the double berths have enough volume to avoid stuffiness, even with the door slid shut.

An opening deck hatch and large rectangular portlights give plenty of natural light and shade from quality Oceanair blinds. Storage includes a large under-bed locker. Sensibly, the starboard cabin has the main switchboard, which means the skipper at the helm can glance behind to check what’s going on. The large switchboard has 12-volt controls on the top and the 230AC shore power below, monitored using readable analogue gauges. The heads are electric fresh-water flush with a macerator, so I’d option the larger tanks; some may consider a water maker run off the 5kW Fischer Panda generator. There’s a Corian basin with an opening portlight beside it. Headroom is nearly 2.0m, while underfoot, a teak grate is a nice touch.

A good quality of finish is found throughout, with solid joinery on doors and no flimsy attachments.

The infused vinylester hull is foam cored without any plywood structures (that could deteriorate), instead using moulded stringers, and has distinct hard chines to add rigidity and reduce drag – something that was very noticeable during the sea trial.

Fine bows with two chines enable a narrow entry while high bridgedeck clearance and a sculptured nacelle underside further reduce the drag. Opening several of the hatches revealed a smooth finish, which demonstrates the credentials of the Sino Eagle yard.

Outboard engines free up a lot of internal hull space so the 36 has vast storage on each side aft. The stern section houses alloy fuel tanks located against the inboard bulkhead (which helps trim). 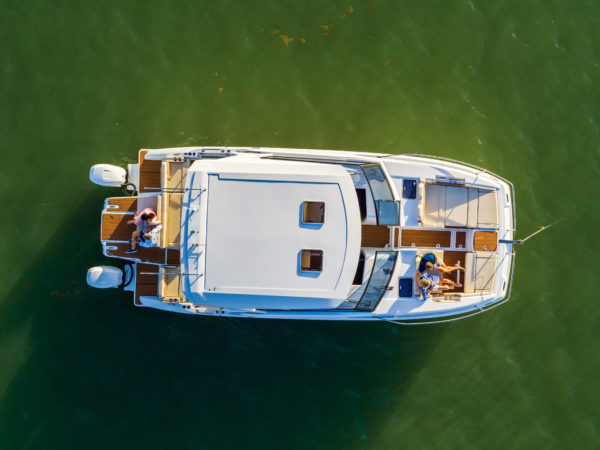 There’s space on the starboard side for a generator set, to supplement the 70amp alternators on the outboards, but ample space is available on the fibreglass bimini for a large array of solar panels.

Nudging the 36-footer onto a beach demonstrated the versatility of this boat. No need for a tender to be towed; simply tilt the motors and glide onto the sand.

On the move, the Aquila felt effortless under power with little wave noise as I sped through the harbour, reaching a maximum speed of 33 knots. Smooth power delivery is what you get with six- cylinder outboards like the 300hp Mercury Verados and my only complaint was their loud roar at high speed, which made chatting a bit difficult.

Snug behind the windshield, my head was well protected. Due to the open-style cockpit, I had surrounding views, especially good when you have a load of guests.

From take-off, the slim hulls had cut through the smooth waters, taking us on the plane at about 12 knots, then as the bow rose the active trim moved the outboard legs and the Aquila sped off with easy control, due in large to the electronic wheel and braced standing position.

Reaching a comfortable slow cruising speed of about 15 knots kept the fuel burn moderate at 58 litres per hour, while moving on to fast cruising at 25 knots consumed 126 litres per hour for a range of 268nm.

But unlike many monohulls, these cats can cruise quite happily in displacement mode so a sedate five knots would take you over 500 miles. Another performance gain could come from the newly announced hydrofoil option for 2019, as it increases top speed while reducing fuel burn – and can be retrofitted to later models. High-speed handling felt slightly strange at first because there’s no hull tilt into turns, so the weight doesn’t shift to compensate for the gravitational pull.

But once I did a few doughnuts and figure-of-eights, I felt confident, with the stability assured and decks remaining totally dry in the metre-high swell.

The only slight flaw I could find was a tendency to go off track when following a wake, as the wave pressure built up between the hulls to cause a small amount of oscillation, but that’s really nit-picking.

Slow manoeuvring, when I went astern to pick up a mooring, was done with ease, helped by the fairly high aft sections that minimised drag.

The Aquila 36 really is a special powercat and like most cats, it can have many different lives, so have fun picking yours.