The 118 WallyPower is one of the most eye-catching yachts in today’s luxury boating market, created by the Monaco-based Wally Yachts. It is narrow and angular in design with black glass housing. It is 118 feet long and is capable of reaching speeds as fast as 60 knots (70 mph, 110 km/h). It is capable […] 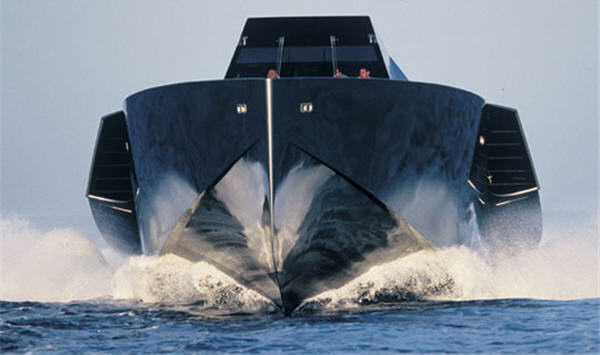 The 118 WallyPower is one of the most eye-catching yachts in today’s luxury boating market, created by the Monaco-based Wally Yachts. It is narrow and angular in design with black glass housing.

It is capable of this feat due to three Vericor TF50 gas turbines generating 16,800 hp. The three gas turbines each drive a Rolls-Royce Kamewa water jet, two steerable outboard and a non-steering booster on centerline.

Wally Yachts did extensive testing in the SSPA facility in Gothenburg, Sweden and at Ferrari’s windtunnel in Italy. The 118 WallyPower is superbly crafted of exotic materials in and out, with thin wood veneers over honeycomb cores and lots of exposed black carbon fiber.

The 118 WallyPower won the MYDA, Millennium Yacht Design Award, organised by Seatec (the yachting and shipping technology show of Carrarafiere) for the “Layout of the Third Millennium.”

The WallyPower is also being honoured by the San Francisco Museum of Modern Art as the sole boat in its major architecture and design exhibition, ‘Glamour: Fabricating Affluence’, which ran from October 9 2004 to January 16 2005. Wally Yachts has only produced one, and it currently resides in the Mediterranean. The 118 is known by most from its role as the “Renovatio” in the 2005 science-fiction film The Island.

Price? $24 million- and the Wally owner should budget, say, $400,000 a year for a professional crew. Wally is awaiting a firm order before building the next 118.

The company might have to wait a while. “I don’t think it’s a marketable product,” says Roger Marshall, a yacht designer and boating writer.

“It’s a high-speed boat that is way overpowered and expensive as hell to run, so the market consists of very few people.”