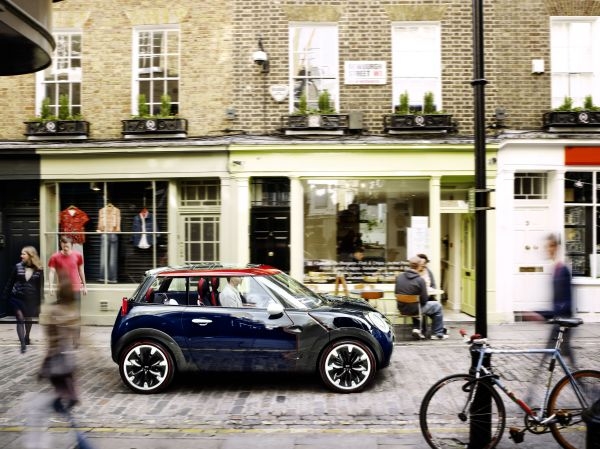 From the end of July to September, the vehicle will be on display in the BMW pavilion near the athletes’ village.

The new Rocketman is a concept that is regarded as a modern interpretation of the old and original Mini car. The car sports a new glass roof, creating light effects both on the outside and inside of the vehicle.

MINI Rocketman measures 3.419 meters in length (133.8 inches), which means it is only a few centimeters longer than the original Mini launched in 1959.

MINI decided to construct the Rocketman from carbon fiber emphasizing a light weight body for fuel efficiency and top safety as carbon fiber crash properties are the best technology has to offer. The Rocketman boasts a 3+1 architecture, which means it has a regular seat behind the front passenger, while a smaller seat has been installed behind the driver.

The design features wide-opening doors with double-hinge joints, allowing easier entry into the rear passenger seat of the three-door car. The luggage compartment can be adapted by pulling out a drawer at the back of the car to store larger items.

Integrated fibre-optics illuminate the interior and glass roof, which is imprinted with the Union Jack. Apparently, Mini is very interested in creating a mini Mini and will take much of the Mini Rocketman design as inspiration for the upcoming, entry-level model.

However, the Rocketman should not be looked at in isolation. The themes presented in the concept preview elements that will feature in most of MINI’s future lineup. The first models to be influenced by the Rocketman are likely to be the new MINI Coupe and Roadster due later this year and in 2012, respectively.