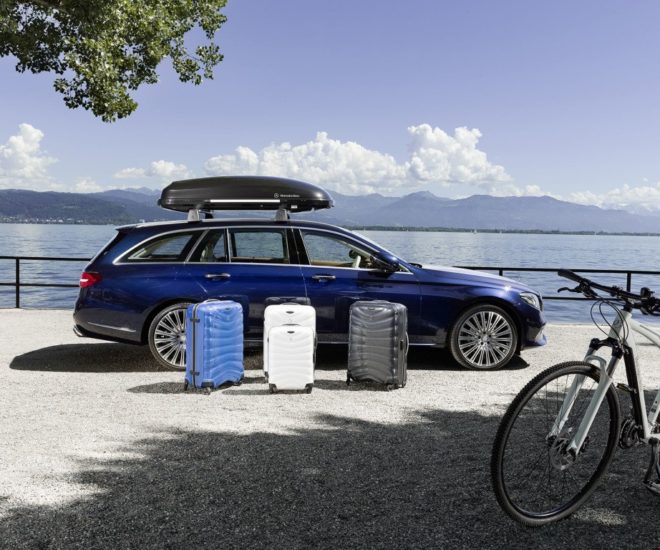 Mercedes’ new summer accessory line offers everything from roof racks to cuddly toys in order to help vacationing families hit the road in style. Yes, everything you see here is from the German automaker, or made available by it, including the cuddly soft toy.

For most families, the summer means a road trip and with it problems packing everything in the car, arguments over what to listen to on the radio and children asking “Are we there, yet?”

According to a July YouGov survey, when it comes to keeping the kids occupied on long journeys, British families are unique in preferring to play “I-Spy”, sing songs or read stories over more high-tech distractions.

However, for a growing number of families, a smartphone or tablet is quickly becoming a road trip necessity and so one of Mercedes’ new accessories is a foldaway table that can be fixed to the back of a seat so that kids can draw or read or that can also be used to hold an iPad. For smaller children, Mercedes has also co-developed a new child seat with BRITAX RÖMER that will fit easily into any current Mercedes model and that is suitable for those aged between four and 12 years of age. The final touch is a cuddly toy called the ‘Reversible Bear’ that can be transformed into a plush Mercedes G-Wagon and back again in a matter of moments.

An April study from the National Renewable Energy Laboratory and Berkeley Lab shows that old-fashioned open roof racks and bike racks can increase a car’s fuel consumption by up to 25% thanks to extra drag.

Mercedes has added three new aerodynamic roof boxes for the summer with capacities of 330, 400 and 450 liters that should increase packing space and not put so much strain on fuel. It’s also added a new Alustyle bicycle carrier that can carry three adult bicycles and has integrated tail lamps and a number plate.

And of course, Mercedes being Mercedes, it is also offering bikes to go in the rack. The Trekking bike for example, boasts hydraulic disc brakes, front fork and seat-post suspension and Shimano gears and is available in three adult frame sizes. For younger riders there’s the Children’s Bike which comes with a unisex frame shape and 16-inch wheels wrapped in chunky tires for a smoother off-road ride.