Hennessey Performance is building three special editions of the Venom GT with a special paint finish designed to evoke the American flag. 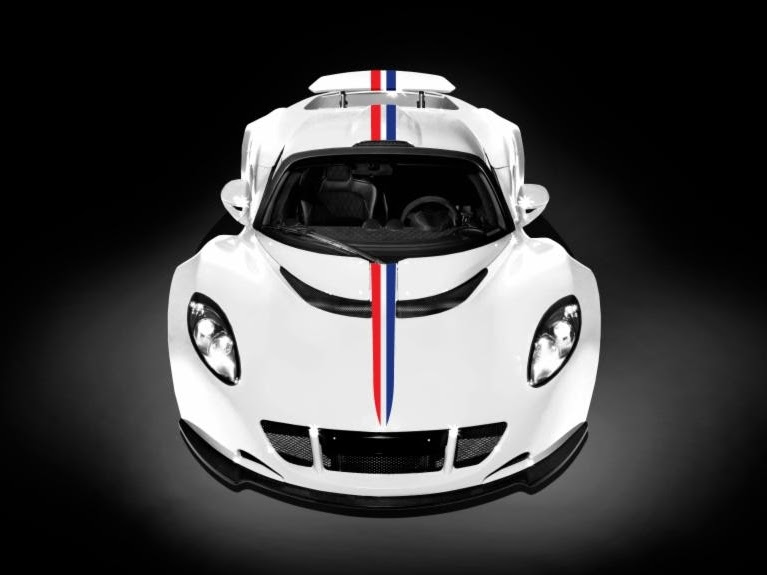 In February, a Venom GT took to the runway at the Kennedy Space Center and managed to break the 270mph barrier, beating the current world record, held by the Bugatti Veyron Super Sport.

To commemorate the achievement, Hennessey Performance is building three special editions of the Venom GT with a special paint finish designed to evoke the American flag.

For a road-going car to be officially acknowledged as the world’s fastest, it must make a record-breaking run twice — so the average speed can be taken — and it must be deemed to be a true production car.

So, road legal, unmodified form a stock version and, crucially, be built in a production run of 30 examples or more.

The Venom was only afforded a single run on the track, and because production is limited to 29 examples, it doesn’t technically qualify as a production car. But that doesn’t mean that the car isn’t ferociously fast!

It’s super-light, thanks to an aluminum and carbon fiber body and is propelled forward by a 7-liter V8 engine with twin turbochargers. The result is a car that weighs 1244kg and delivers 1244bhp, the magic ratio of 1bhp per kg. Swedish supercar maker Koenigsegg has just officially unveiled its latest creation, the Agera One:1. Like the Venom, it has the magic ratio of 1PS (metric horsepower) per kg (1340 of each I total) and, the company claims it is good for “at least” 273mph!