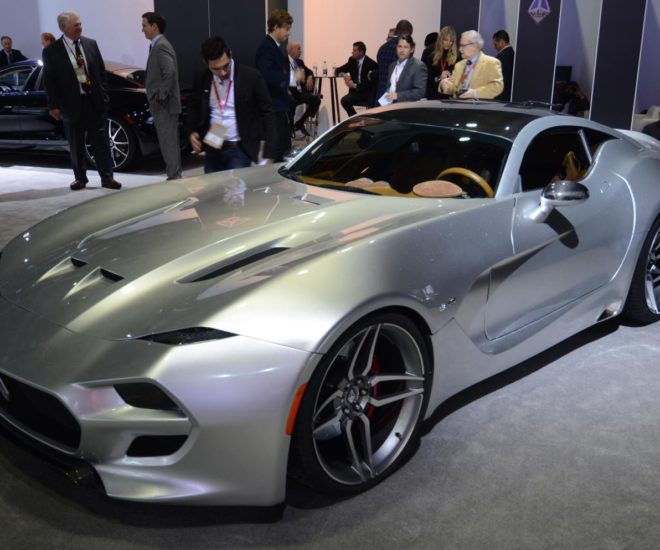 While legal wrangling almost kept the covers on the Henrik Fisker-designed VLF Automotive Force 1 supercar, what has emerged at the North American International Auto Show 2016 is actually a limited edition vehicle that is ready to go into production. Thanks to legal wrangling and claims of copyright infringement that have been plaguing the model since its first teaser sketches were published late last year, it looked as if the concept car might never see the light of day. Read on and you will discover that this is more than a mere concept at this point.

First of all, some background is needed on this saga. While not many will recognize the name Henrik Fisker, pretty much everyone knows Aston Martin. The legal action in question was from Aston Martin, Fisker’s former employers, who claimed the car looked too much like its DB10. Fisker promptly counter-sued and thus continued a love-hate relationship the two parties have been engaged in of late — recent Fisker concepts based on current Aston Martin models have been successfully stopped from going into production for similar reasons.

However now the car has made its debut, any potential likeness with an Aston Martin is difficult to glean; in fact, it looks as if it should have been supercar companies seeking legal counsel, because the car is more than just a concept, it is going into limited production – 50 initial examples – with a $268,500 asking price.

For that sum, owners will get a car designed by the man responsible for penning the lines of the Aston Martin DB9 and BMW Z8 and one backed by former GM boss Bob Lutz and racing driver Ben Keating. The shell is carbon fiber to cut as much weight as possible and the engine under that aggressive hood is reminiscent of a Dodge Viper — an 8.4-liter V10 with no turbos or superchargers attached (other reports confirm that is a Dodge V10 powerplant). That means a 0-100km/h time of 3 seconds and a standing quarter mile time of 10.97 seconds.

Under the carbon fiber paneling is a cutting-edge chassis and computer-controlled suspension setup that promises fine handling as well as blistering but predictable straight-line speed. But perhaps best of all for supercar purists, is that this car comes with a six-speed manual transmission as standard. Ferrari, Lamborghini, McLaren and Porsche have all now ditched the stick-shift in favor of paddles and in doing so have robbed keen drives of greater involvement.

However, not everyone who could potentially fall for the Force 1 is a purist so an automatic option will also be available – complete with the now obligatory steering-column-mounted paddles.