With 66 of its restaurants winning stars in Michelin’s 2013 guide, New York was again confirmed Tuesday as one of the best places in the world to dine 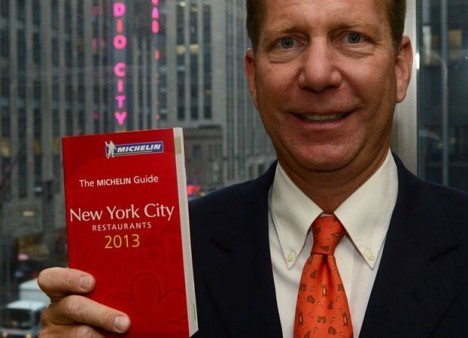 With 66 of its restaurants winning stars in Michelin’s 2013 guide, New York was again confirmed Tuesday as one of the best places in the world to dine — and the unrivaled master of diversity.

Another seven got two stars, or “excellent cuisine, worth a detour,” including for the first time the newly-opened, 18-seat Atera — run by chef Mathew Lightner, in Manhattan’s trendy TriBeCa neighborhood.

Fifty-two restaurants, meanwhile, got one star, up from 46 last year and including nine new entries. The Big Apple’s overall count this year is up five from last year, with representatives of all the city’s five boroughs

“New York’s culinary terrain remains extremely dynamic. The rhythm of openings and closings is like nowhere else in the world,” said Michael Ellis, the international director of the prestigious annual guides issued by the French tire company.

Sixty-one different cuisines are represented, from Persian to South African, Peruvian to Greek, Austrian, Turkish, fusion, gastropub and all the old standards like Italian and Japanese.

Among notable trends, Ellis said, is a leaning toward local products and Nordic cuisine, as well as continued Japanese influence.

Ambitious chefs, meanwhile, are concentrating on the food, rather than decor, with “a relaxed atmosphere” common, even in the starred restaurants.

“The young generation of chefs wants to express itself through the dishes, but not necessarily with a big investment in the decor,” he said.