A gourmet ice cream boutique in Hong Kong drew curious crowds with adventurous palates at a food expo last week for its lobster and foie gras flavored desserts. Arron Liu’s Ice Cream Gallery was a crowd favorite at this year’s edition of the Hong Kong Food Expo for audacious ice cream flavors that aim to […] 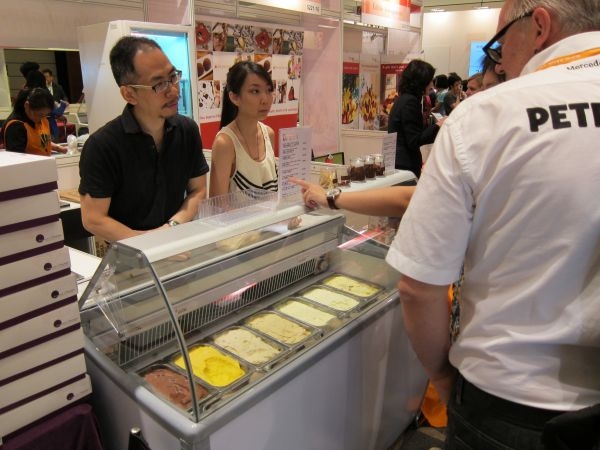 Since 1994, Liu has developed more than 600 ice cream flavors, some of which are inspired by French haute cuisine — like the foie gras and salmon varieties.

Ingredients are sourced from around the world with truffles from Italy, sesame from Greece, nuts from Spain and gold-grade Japanese green tea.

But like any fancy suit-and-tie restaurant, Liu’s gourmet flavors don’t come cheap. A 500ml tub of foie gras ice cream, for instance, is $800 HKD, or €71.

Half-way around the world, Ben & Bill’s Chocolate Emporium also sells a lobster-flavored ice cream made with butter and local lobster from Maine.

Ice cream has become the newest medium for adventurous chefs looking to push the envelope — and some buttons.

To avenge what was becoming an insect scourge in Columbia, Missouri, a local ice creamery candied cicadas — a relative of spittlebugs and leafhoppers — and tossed them in an ice cream base of brown sugar and butter.

In London, another high end boutique The Icecreamists snagged headlines for its breast milk ice cream called the “Baby Gaga.”