Back from the past and decked out in a brand new outfit, the Oscar statue cuts quite the figure this year. 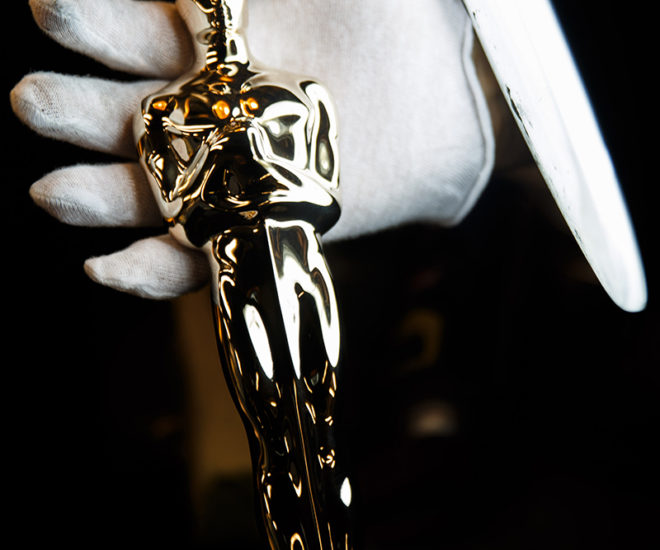 We join Kate Winslet in waiting to see if Leonardo DiCaprio wins his first and much-deserved Oscar (fingers crossed here but I also fear it may “break the Internet”). However, another thing we are looking forward to this year happens to be the statue itself. The famous gold man holding a sword (yes there’s a sword, don’t ask us why) has gone for a little makeover, just in time for the ceremony. With an 88-year long legacy, there is a certain class that will forever be attached to the award. This year, the Academy of Motion Picture Arts and Sciences is bringing back some of that old-school glamour by revisiting the original statue when the award ceremony first began. Actually, the base of the statue is a stylized film reel, something else quite old-school since many people wouldn’t even recognize a film reel today. A rubber mold of the 3D print is made and used to make a wax pattern for each bronze Oscar® casting.

Originally modelled by MGM Art Director Cedric Gibbons, the statuette has signified movie excellence since its inception in 1929. Standing at 13.5 inches and weighing a hefty 8.5 pounds, these were initially gold-plated solid bronze, but were then replaced, in favor of Britannia metal. From 1982 till 2015, the statues had been made by Chicago-based R.S Owens & Co. It was plated with copper and nickel-silver before, and during World War 2 it was even made in painted plaster, but now the Bronze-Gold combination is back to reclaim the spotlight, with a few updated touches. After molten bronze is cast into the ceramic mold, the Oscars® are cut loose from their plumbing systems and sanded and polished by hand.

The Polish Tallix Fine Art Foundry based in Rock Tavern, New York has been touching the new statuettes with 3D Technology and electro-plating, as well hand-buffing for a smooth satin-effect. This long process of doing up 50 statuettes took 3 months. The result is a gleaming gold statue with “restored subtle features’ by the manufacturer. Award recipients will not only be cementing their status amongst the industry’s elite but also be holding a century’s worth of Hollywood history in their palms.

The 88th Oscars is set to air on February 28 across more than 225 countries.