Chanel will pull the plug on its costly Mobile Art exhibition that was slated to travel to major cities worldwide in a structure designed by Zaha Hadid. 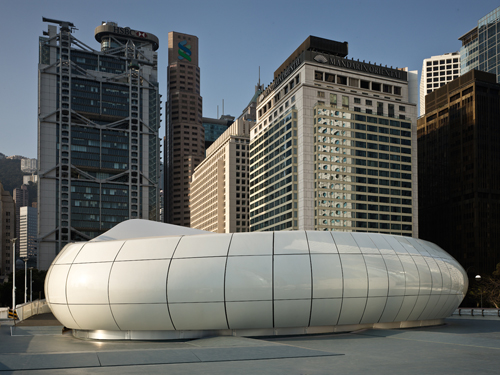 Chanel on Friday said it would pull the plug on its costly Mobile Art exhibition that was slated to travel to major cities worldwide in a Space Age prefab structure designed by architect Zaha Hadid.

The decision comes amid snowballing bad economic news and Wall Street scandals, and reflects a new sobriety for luxurious endeavors.

â€œConsidering the current economic crisis, we decided it was best to stop the project,â€ said a Chanel spokeswoman. â€œWe will be concentrating on strategic growth investments.â€

Conceived by Chanel designer Karl Lagerfeld with Hadid, the Mobile Art exhibition was one of the most ambitious art-meetsfashion cohabitations embraced by the luxury and fashion worlds.

The project was born as luxury seemed invulnerable to downturn. But by the time it opened in Hong Kong in March, the cracks in the world economy had started to deepen.

The project subsequently traveled to Tokyo. By the time it landed in New Yorkâ€™s Central Park in October, the economy was crumbling at an alarming pace.

Plans have been scrapped to take the exhibit to London, Moscow and Paris.