Unconventional good looks and a love of painting and fine arts is Sang Woo Kim’s calling card where pretty boys are a dime a dozen. 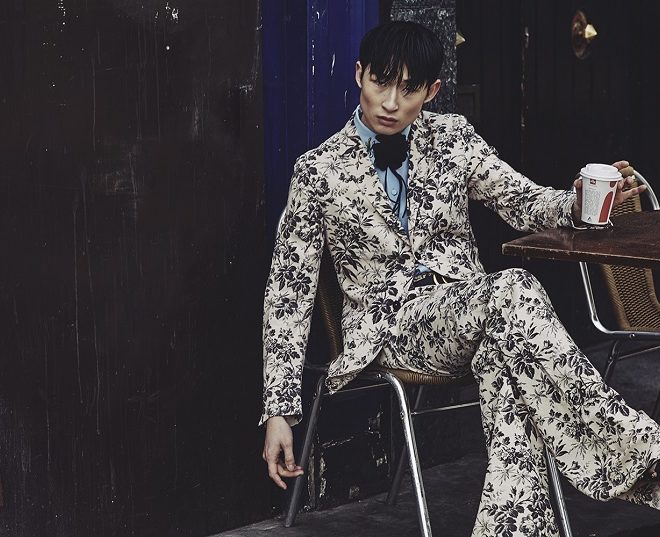 A sense of purpose plays a crucial role in helping an outsider settle into a foreign environment. Think of a youngster, a second generation South Korean living in London, modeling for British luxury house Burberry. It was obviously designed, at least in part, to be scorned by your average fashion devotee. Yves Saint Laurent who once quantified that “a good model can advance fashion by ten years.”  That same sort of dynamic applies in the case of Sang Woo Kim, where fashion works like a frivolous panacea for the well-being of creative types.

The observant are likewise mindful that Diesel’s recent Spring/Summer campaign doesn’t just feature a pursed-lips Joe Jonas and model Trevor Signorino. It also stars the South Korea-born Sang, who has become an unconventional poster boy for forward-thinking labels, thanks to his unique Asian features. A better question: why are labels like Kenzo, DKNY, Vivienne Westwood and Dolce & Gabbana giving shine to an outlier like Sang? The hip factor of how progenies of the Asian diaspora have integrated themselves has clearly leveled the playing field.

Growing up in London after his parents emigrated when he was still a toddler, Sang’s career began on the front-lines: he joined Prada as a public relations intern in South Korea. Working in this position quickly dispelled any idealized notion of glitz and glamour.  He realized that to make it in the industry involved lots of hard work, and a commitment to professionalism on a daily basis. It also got him noticed. Evidently, the 22-year-old doesn’t look like the typical runway model, even by Asian standards. Yes, he’s tall and lanky. And his lack of muscle definition renders him the perfect muse to self-classified avant garde designers. But his resting expression is that of a perpetual annoyance that looks like the physical manifestation of a fisheye app replete with caricature-like single-eyelids and impossibly defined cheekbones.

Here is a pensive young man with slicked back hair who spends balmy days studying at Central Saint Martins (CSM). He excelled at painting and still considers himself, first and foremost, an artist by refusing to be pigeon-holed as a human mannequin. The Goldsmith Fine Art student channels his inner-being onto canvas using colors, giving expression to his personality. It took a while to rediscover his schoolboy skills but Sang enjoys every moment, taking advantage of his new lifestyle and contacts to showcase his other portfolio. And part of the reason he acts the way he does – the attitude, the nose ring – is to exasperate the haters. If no one is going to give you a hard time, then why bother. “Although I’ve always been seen as ‘different’, I never felt different,” he says, gesturing emotively like he usually does, while his words are ironically laced with self-depreciating Brit charm. It is equal parts nature-versus-nurture, and equal parts millennial self-assuredness. Indeed, he has a distinctive face, to say the least, and it was an X Factor that got him one a foot into the door of London’s Select Model Management. “I have to thank my parents for the way I look,” he jokes, mentioning that his father returned to South Korea when Sang was a teenager due to work commitments.

There are some who are unconvinced, and he shrugs off the occasional racism on what is now his home turf of Hampton as something that comes with the territory. And he feels it’s kind of the point. “The best thing about being at university was that students would mingle freely and converse without any preconceived prejudice,” he explains. “We had absolute freedom to express ourselves creatively.” When he travels, you can add cross-culture cacophony, considerable jet-lag, and advanced dehydration to the formula. As he moves from one “adventure” (a word that he uses often) to another, he gets caught up in the flow of meeting new people and new experiences.

Evidently, where others would quail with apprehension or throw up their hands in despair when segregated as a minority, Sang sees the challenges as good opportunities to learn and grow, and to emerge a self-actualized individual who isn’t about to be blatantly demographed and rejected as a matter of principle.

What prompted your start in modelling?

I studied at Central Saint Martins (CSM) and many of the fashion students were friends who asked if I could be a model for their projects and assignments. Normally, they’ll buy me coffee or lunch as ‘repayment’, which I gleefully accepted! This became a regular occurrence and a friend of mine, who was a photographer, urged me to walk into a modeling agency. Everything else happened quite naturally right after. You have very unique facial features? Do you think they will affect your career in fashion in the long run?

I’ve lived in London since I was six months old when my parents migrated to London from South Korea. Naturally, I was an ethnic minority and looked different to most of my friends and peers, but college was a creative hub where people strived to be different. I do not know what the future holds, but there were never any expectations of what I needed to achieve at such a young age. Hence, my only concern is living in the present. This is the very same mindset when I got my start and it has served me well.

Growing up in London, did it help with being connected to the scene?

Being able to converse and maintain relationships with right people has been important. It wasn’t done intentionally because the individuals that I’ve maintained relationships with are my genuinely friends, regardless of whether they are in the fashion industry or not. The only advice for any aspiring model is just to be true to yourself. Also, treat people with respect and do not take anything for granted. Every opportunity is a blessing in disguise. It’s the experience and journey that matters.

How did your love of painting come about?

To be honest, I’ve loved painting ever since I can remember. It’s always been a part of my life so I cannot imagine living without it. Modeling is hardly my lifelong goal as I’ve always wanted to be an artist who thrives in difference disciplines such as drawing and photography. I’m just luckily that fashion modeling came about without me having to think about it. The fact that it blew up into something bigger than I can ever imagine is a plus. The challenge in the future is to achieve similar success as an artist, which will be challenging and exciting in equal measures. Art and fashion seems to influence one another, if you have the option work on a project combining the both, what would it be?

You are one of the most recognizable faces in the fashion world. Was it hard getting to where you are? Is there pressure to keep evolving?

I like to believe that I don’t view myself as how the ‘fashion world’ sees me. For sure, I am very fortunate and appreciate of the blessings and opportunities that came my way. Have I actually accomplished anything? It’s debatable. There are clearly more important things in life than what I’m doing. It gets difficult when people see you differently. I guess that has always been the struggle because when your physical identity is constantly on display, yet the voyeurs don’t actually know you, there will be preconceptions of what you’re like as a person. I don’t feel any unhappiness as a result of this, simply because they have no right to judge me. I don’t need to conform to what society tells me to do. I’ll be perfectly contented if it all ends tomorrow as I’ll be on the lookout for my next adventure. The shelf life for a model is relatively short, have you considered what you want to do after?

I feel that there will not be an ‘after’. The modeling happened incidentally while I was living life the only way I knew how. As I said, it’s about what happens now and not dwelling on the past or overthinking about the future. The present is literally a gift. It’s the only time when I know that I’m alive in this world, and that’s important to me.

What does your family think of your prissier vocation?

They are happy that I am living the life that I wanted. I don’t really know (or want to know) what they actually think of my job per se. As long as they are happy and they know that I’m happy, that’s all that counts. I would say they are ‘proud’ of the fact that I’m earning my keep in this manner, because I look just like them [laughs].