Hong Kong Cantopop star Pakho Chau is hitting all the right notes and garnering second looks. Our friends at Men’s Folio got the story from the horse’s mouth. 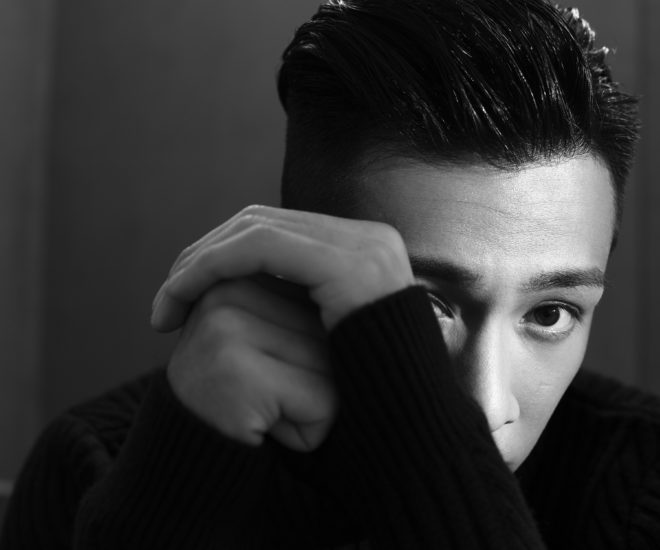 With gorgeous looks and a buff physique often revealed via Instagram posts of his gym and basketball sessions (he used to represent Hong Kong as a strapping 1.82m player) and shirtless magazines covers, Pakho Chau is afflicted by the same malady that has plagued many of his predecessors: pretty boy syndrome. Our friends at Men’s Folio had a chat with Chau late last year and tried to get beneath the surface while also producing a lovely spread featuring the Cantopop star.

Often labeled with a disclaimer for a perceived character flaw, these good-lookers ironically have an easy start as pop idols but it doesn’t require a lot of range. There are reasons why pretty boys are having it tough when it comes to longevity and credibility. It goes to show that looking like an Adonis cramps your style.

Cases in point: Many hated Aaron Kwok and his floppy hair in the 1990s before his Golden Horse Award wins; Wang Leehom was similarly the subject of vehement verbal abuse in the new millennium despite being able to play different musical instruments; and detractors who remembered Takeshi Kaneshiro as a Taiwan-based pop idol despised him in both decades. It was with great effort that Miuccia Prada and Giorgio Armani (and maybe Biotherm) convinced them otherwise about the latter.

To drive home the point on the international front, I recall lesser male specimens cursing as Brad Pitt sleepwalked through Meet Joe Black and exhibiting the middle finger each time Tom Cruise grinned like a proboscis monkey onscreen. Have you ever watched a Tom Cruise film after Risky Business and Top Gun and be so aware that it’s Mr Cruise on screen in every subsequent film. The man does not inhabit a role. The role has to audition with back-flips and quadruple summersaults. Boy-band bashing is likewise extensive on both sides of the pond. And don’t get haters started on Justin Bieber. That would just be uncivilized. As a counterpoint, female colleagues pointed out that raging heterosexuals did not display a similar disdain when the members of Girls’ Generation sashayed meaninglessly throughout the recent music video of “Party”. Point taken, but hardly a paradigm shift.

The gripe being that many of these handsome male homo sapiens commonly lack that the necessary talent in correlation to their physical attributes, with weedy wannabes that are a dime-a-dozen falling by the wayside. This clearly isn’t the fate that awaits Chau. “I believe that true success requires sacrifice,” he says. “It’s not safe to rest on your laurels because only the hard workers earn the respect they deserve that makes them living legends in their own right.”

Throw Show Luo, the brooding vocals of Eason Chan, and a sprinkling of Hong Kong singer and actor Daniel Chan in a mixer and you’d probably get Pakho Chau. While the 30-year-old is blessed with good looks, he literally got his start at the bottom at film composer Chan Kwong-Wing’s recording studio as a junior engineer. “I had modelling gigs on the side,” recalls the Hong Kong native. “But my time learning music production had the most impact on my career as I learned the tricks of the trade. I learned not just the technical process, but also that success requires time, persistence, and patience to nurture.” Just as well, with peepers that resemble Bambi’s, his cheekbones are also dangerously defined, and his wry smile can turn sane females (and the occasional male) into shrieking banshees at the drop of a snapback cap. Chau first caught the attention of Chan, whose claim to fame includes scoring Hong Kong blockbusters The Storm Riders, Infernal Affairs and Bodyguards and Assassins, putting him in good stead. A recording contract with Warner Music in 2007 soon followed.

It helped that he can carry a tune (without the help of Auto-Tune), play the guitar, and write his own songs. His musical inclinations date back to the age of five, when he was already playing the piano. “My dad was an audiophile and used to buy CDs very frequently,” he says. “As a result, I was exposed to Cantopop at a very young age. My mom also fervently encouraged me to attend piano lessons, and that’s how I became infatuated with music.”

Thankfully, there were no heart-thumping dance tracks or an artificial transfusion of street cred courtesy of faux hip-hop posturing in Chau’s music. Instead, we’re treated to forlorn ballads that are lyrically poignant and, every so often, heart wrenching. “There’s always a real-life incident that inspires a song,” he mentions candidly. “However, not one aspect of life completes me. There are notches in our short time here on Earth that is represented lyrically and in the melodies of my composition.” This is not intentionally skewed as his latest single “We’ll Be Fine” tells a melancholic tale of loneliness and the desire for emotional fulfillment. The accompanying music video shows Chau driving and walking aimlessly with the ambiguous ending suggesting the death of his beloved. The nimble strumming of guitars in the background showcases his sturdy vocals. “I’m sure everyone affiliates to the emotions that resonate from my songs in some ways,” he says. “And that’s what makes each one of us unique.”

The solo artist is well aware of the steep learning curve, and after seven studio albums, he’s delivered a more polished and sophisticated sound. There is truth in that, in a sea of homogeneous Asian celebrities, he has made efforts to differentiate himself by being true to himself without a regurgitation of a manufactured pop template. The reception from fans so far has been wonderful, even as Chau gives props to those that paved the way for him and his peers.

“Jackie Cheung, Aaron Kwok, Faye Wong, Eason Chan, Joey Yung, Miriam Yeung…” he rattles off a list of Cantopop superstars and crooners that he notes as having been instrumental in shaping his outlook to making music that’s accessible and honest. “They each have facets that I emulate and incorporate into my repertoire. I’m also heavily influenced by [Irish singer-songwriter] Damien Rice’s song writing expertise and his effortless way with the acoustic guitar that’s second to none.” So sure, he has his singing career. But we’re back to the original Zoolander-inspired conundrum. Is there more to life than being really, really, ridiculously good looking? The film roles are steadily pouring in with him joining the fray of romantic comedies S for Sex, S for Secret, 12 Golden Ducks, and Love Detective last year alone. “My schedule these days is crazy, so to have opportunities to dabble in film is a godsend,” he says, to which he was quick to point out that “music is still my focus. I don’t ever want to stop making music. Hopefully, fans of my music will like the films I appear in as well.”

It would also seem natural that Chau would be an ambassador of youthful lifestyle giants Watsons, Adidas, Levi Strauss & Co. and Clinique Men’s Skincare, extolling the virtues of grooming elixirs and treatments for men, just like any auntie-killer would. Yet, as an indication of maturity, Montblanc has designated him as the Asian influencer for its luxury timepieces. “I didn’t like watches when I was younger,” he admits. “However, I’m gradually realizing the importance of time and how the amount of it that we’re allocated is finite. I’m a budding collector and Montblanc’s rich heritage is one that has constantly caught my eye over the years.”

Far from fearing the repercussions of overexposure, he is receptive that the additional visibility will only broaden the appeal of his music. And why shouldn’t his mug have its day in the sun? Everything is about making a good first impression these days. Chau gravitated with his best face forward on a grand stage. “I remember my concert at the Hong Kong Coliseum (in 2014) as being the biggest scale performance of my career,” he lets on. “I was extremely nervous and completely in awe when glancing at the sea of faces in the crowd. In my mind, each member of the audience came because of me. That was a very touching moment.”