In spite of economic woes today, a Sotheby’s auction shows the market’s far from dead. 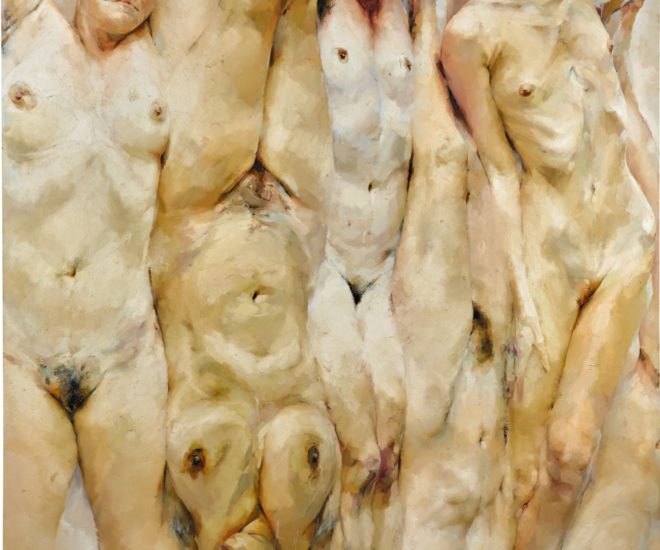 Fears about the British art market were alleviated at Sotheby’s when a resoundingly successful sale of Contemporary Art went down – it raked in a total of around £52 million. Ok that doesn’t go as far as it used to but why quibble? With all the economic rumbling coming from the massive fault line underlying the Brexit referendum, it is worth remembering that the world just keeps right on turning and in times of trouble, one can still enjoy art. The star of the Sotheby’s Contemporary Art Evening Auction was “Shift,” the famous and altogether quite visceral painting by the anatomy-obsessed Jenny Saville.

“Shift” is a massive 330cm x 330cm painting depicting five or so bodies (there’s a bit of an extra one on the side) stuffed together onto the canvas like sardines. In a specifically Saville-esque way (although her style has similarities with the realist grotesqueries of Lucian Freud), the bodies are naked, raw, elongated, and are spread all around with moldy skin suggesting frailty and decrepitude. This comes together as a wave of flesh that seems to protrude out at any viewer – possibly the meaning behind the ‘Shift’ in the title. Mind you this is a painting so for it to be this visceral is breathtaking.

It had its debut in 1997 at a Young British Artists show entitled “Sensation”, organized by famed art collector and impresario Charles Saatchi. The show was viewed as particularly offensive by the public at the time, especially for a work by artist Chris Ofili – a painting of the Virgin Mary decorated with elephant dung and collaged images of female genitalia. Well, the public has never really had much patience for depictions of elephant dung anyway. A case in point is a showing in New York, where then-Mayor Rudolph Giulliani tried to shut down the exhibition. Needless to say, it was a great success (the show, not Giulliani).

Surprisingly, established art dealer Larry Gagosian was beaten to the final bid on “Shift” by the Long Museum in Shanghai – who paid around £6.8 million for it. Founded by billionare Liu Yiqian (who, by the way, made himself infamous for drinking out of a 500-year old historical cup), the museum specially showcases his art collection. Liu’s focus lately has been about nabbing International works of Art to showcase to the Chinese citizenry. He procured a Modigliani from Christie’s a few months back, much to the consternation of Western fans.

Other than the Saville, Keith Haring’s pop-art nightmare, “The Last Rainforest”, fetched around £4 million. It is one of his densest works, as it layers a sprawling violent cartoonish landscapes on yellow and red splatters. The other higher earners from the sale include Jean Dubuffet’s grimy abstract painting “Barbe de Lumière des Aveuglés” (around £3 million), Sigmar Polke’s acrylic and fabric work “Roter Fisch” (around £3 million), and a version of Andy Warhol’s famous Marilyn Monroe reproductions (around £2.8 million).

If there’s anything we’ve learnt from the past, it is that art and literature blooms in tumultuous times. This is not to buy into the idea that suffering is necessary to breed creative genius of course (no amount of suffering helped artists within the former Soviet Union who were under censorship). At the very least, trouble builds discussion, and as the original show by the Young British Artists proves, the artist always aimed to be the loudest communicator. Even in an economic slump, people will still admire, consume, collect, and create works that reflect the atmosphere.