The retrospective Robert Indiana: Beyond LOVE at the Whitney Museum of American Art in New York showcases the works from one of the most preeminent figures in American art 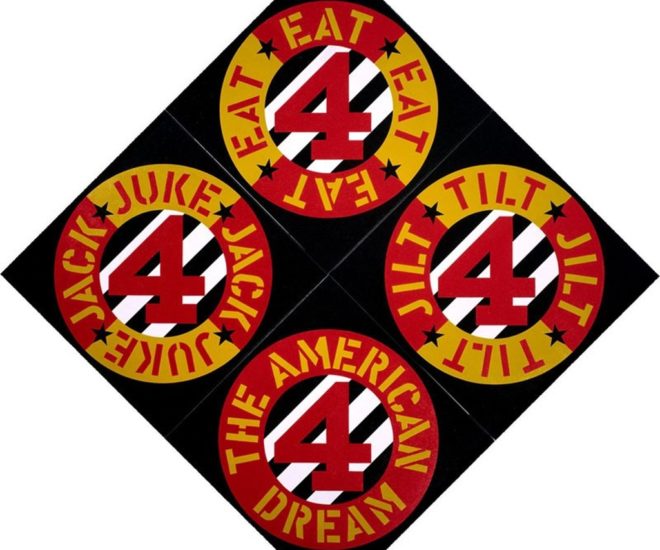 You have probably seen the sculpture or painting that forms the shape of the word “LOVE” all around the world and it is by none other than Robert Indiana, one of the main protagonists of the Pop Art movement. This year, the exhibition Robert Indiana: Beyond Love at the Whitney Museum of American Art in NY presents an overview of the work of the American artist.

Born in 1928, Robert Indiana has been one of the preeminent figures in American art, mainly assemblage art, hard-edge painting and pop art since the 1960s. Most of his works explores the American identity, personal history and power of abstraction and language. While most painters have yet to challenge the boundary between fine art and commercial advertising, Indiana provides straightforward American signs and fashions visual mantras from such short and blunt works like “EAT”, “DIE” and “ERR.” Indiana’s work has been featured in numerous solo and group exhibitions around the world and is part of the permanent collections in well-known museums such as the Museum of Modern Art, Whitney Museum in New York and the National Gallery of Art amongst others.

The exhibition is said to put his love works in a broader perspective having several versions of the art piece, including the original 1966 love paintings and a recent re-creation of a six-foot, three-dimensional example from 1966. Viewers can also enjoy a series of paintings featuring quotations from Whitman, Melville and Longfellow. Images of people are rare but the exhibition holds a portrait of Marilyn Monroe called “The Metamorphosis of Norma Jean Mortenson” (1967), which speaks to the ideas of shifting identities.