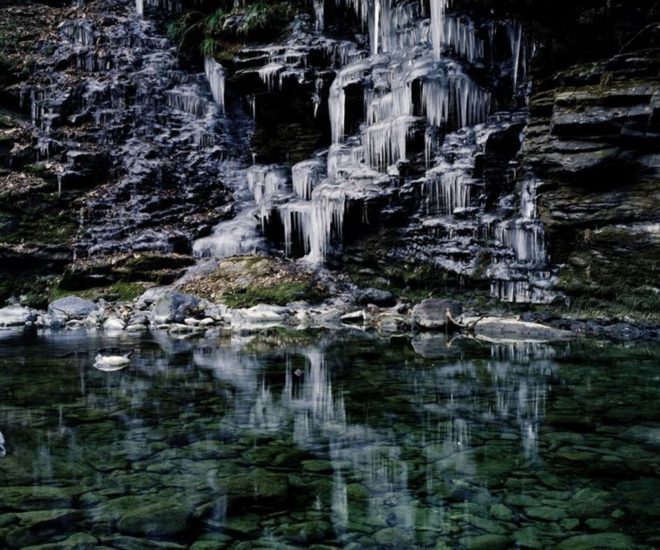 Braving the cold and harsh conditions of mountainous Japan, Hayato Wakabayashi scaled great heights to capture the graceful and elegant frozen waterfalls outside caves. The landscape captured in this beautiful series could be likened to mystical and surreal landscapes one would encounter in a daydream. He goes to great lengths to represent both movement and stillness in his photographs.

These photographs were inspired by“the imperceptible growth built from repeated elements in nature,” and more importantly the photographer’s fascination with the philosophy of Simone Weil, the 20th century French philosopher who became posthumously famous for her writings on mysticism.

All the natural movements of the soul are controlled by laws analogous to those of physical gravity. Grace is the only exception. Grace fills empty spaces, but it can only enter where there is a void to receive it, and it is grace itself which makes this void. The imagination is continually at work filling up all the fissures through which grace might pass.
― Simone Weil, Gravity and Grace

“Nothing can escape gravity,” comments Wakabayashi. “There is a natural order that exists outside our rationalized ideas. Gravity holds all that exists.” Hayato Wakabayashi’s photographs are being exhibited at hpgrp gallery in Tokyo until April 25 .

To learn more about Hayato Wakabayashi, visit his website here.