It’s not just brands like Levis leaving Facebook, Zuckerberg’s own staff are having second thoughts about his personal values and how it affects his philanthropy 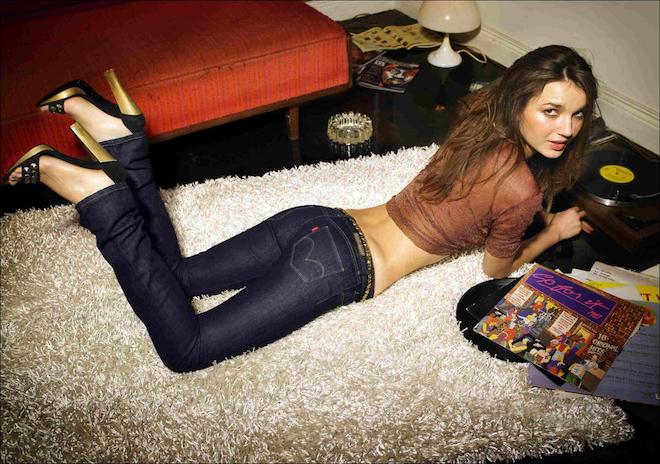 Facebook’s crisis has been a long time in the making. The advertising boycott against Facebook is gaining momentum, with global brands from Lego to Levis joining food & beverage brands like Starbucks and Diageo in a wave of monumental proportions to put pressure on the social network to deal with hate speech in a way that capitalist conglomerates know how – money.

According to The New York Times, advertising makes up 98 percent of Facebook’s revenue and in recent weeks, over 400 companies have pulled advertising from the social media giant. In addition to Levis, Addidas, Reebok and Coca-Cola are among the brands which suspended Facebook advertising with immediate effect for the month of July while others are pledged to stay off the platform for 2020, some indefinitely. 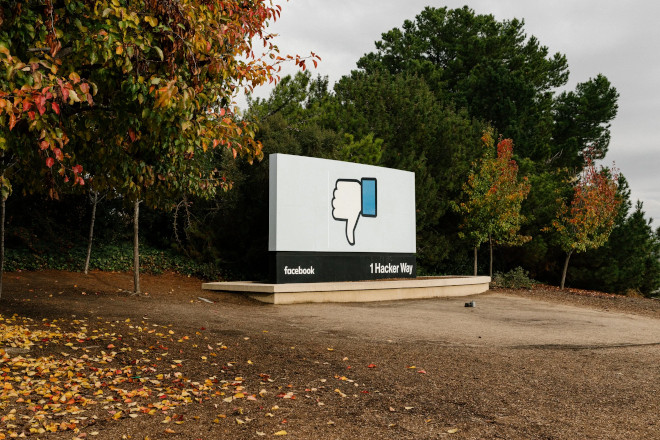 “When we re-engage will depend on Facebook’s response,” Levi Strauss CMO Jen Sey

Much of the current controversy came from Facebook’s refusal to remove a post from US President Donald Trump, which said: “When the looting starts, the shooting starts,” in reference to protests following the killing in police custody of an unarmed black man, George Floyd.

Growing concern about Facebook’s failure to stop the spread of misinformation and hate speech on its platform and the famed reticence of its founder Mark Zuckerberg to even police or remove fake videos or fake news prompted satirical sites like Chaser.com.au to even run stories with headlines suggesting Zuckerberg has improper relations with children. 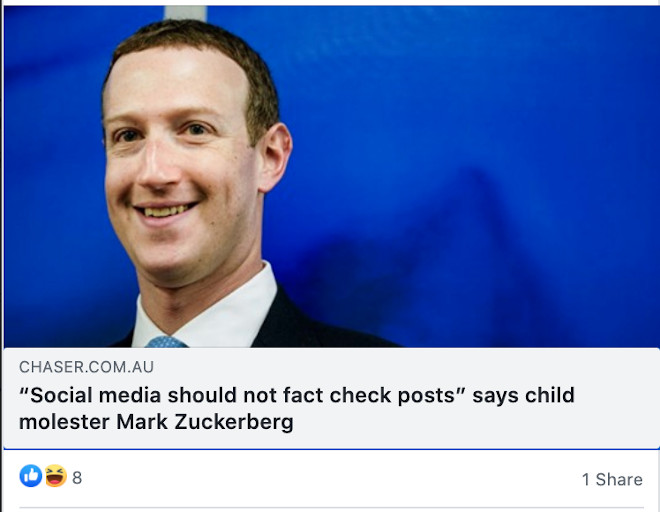 Lego’s chief marketing officer, Julia Goldin, said: “We are committed to having a positive impact on children and the world they will inherit. This includes contributing to a positive, inclusive digital environment free from hate speech, discrimination and misinformation.”

In fact, just last month, a town-hall meeting with Zuckerberg prompted a staffer to ask him to resign. But it wasn’t some employee from Facebook (those staged a walk out earlier in the year), it was one from his philanthropic trust – the Chan Zuckerberg Initiative.

Is the Chan Zuckerberg Initiative influenced by Mark’s personal values?

“The actions you take at Facebook reflect on you as a leader and your leadership skills and values. It only reflects reality to say that our leader’s idea of free speech values calls to murder people for demonstrating over the political speech of the demonstrators themselves,” he said in a video posted on Facebook (ironically) of the event gone viral. 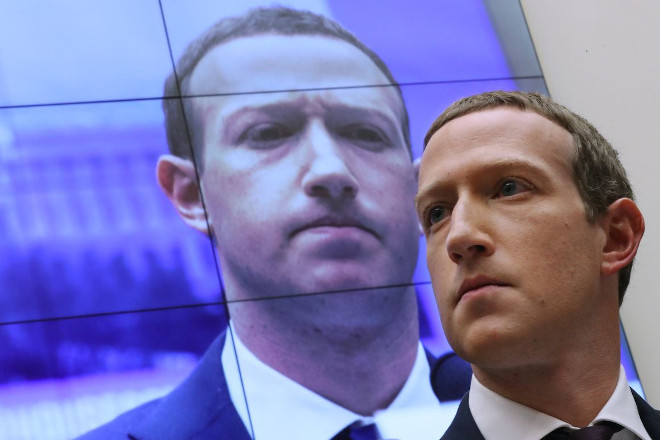 Zuckerberg, who looked taken aback initially, mounted a mealy mouthed defence that implied the organisations are fundamentally different even if it shared common values. Zuckerberg is right, in so far as that legally, the $80 billion charitable entity is different from the $600 billion corporate behemoth he has built. However, scratch on the prima facie nature of his defence, and one realises that his charity benefits almost entirely from the profits enjoyed by Facebook and even if such a clear legal and political delineation existed between CZI and the social platform, potential beneficiaries would be hesitant to accept funding from such a tainted source.

On June 1st, hundreds of Facebook employees, staged a rare protest the lack of action taken over President Trump’s inflammatory posts. Refusing to work in solidarity with Black Lives Matters protestors. The group staged a virtual “walkout” during the work-from-home period of the coronavirus quarantine. Staff also circulated petitions with some threatening to resign, the greatest challenge Mark Zuckerberg’s leadership of the company in recent years.

According to Reuters, the company fired an employee who had criticised Chief Executive Mark Zuckerberg’s decision on June 13 but claimed that it wasn’t over the walkout adding that employees who participated would not face retaliation. User Interface Engineer Brandon Dail, the employee in question, was dismissed for publicly scolding a colleague who had refused to include a statement of support for the Black Lives Matter movement on developer documents. 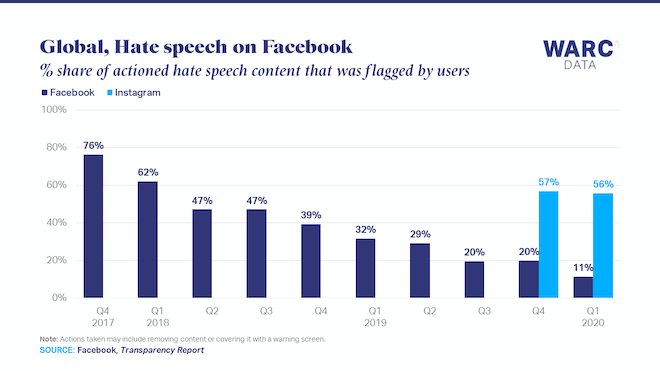 Advertisers have been unhappy with Facebook for years, generally over inaccurate measurements of effectiveness on its platform and the lack of brand safety as ads occasionally mixed with objectionable or unfortunate content. The discontent hit a peak two years ago with drama surrounding Cambridge Analytica when it was discovered that Facebook had improperly provided personal data of tens of millions of users to the data firm. President Trump’s post was merely the lightning rod for lingering resentment.

“We’re pausing our advertising until Facebook can create an acceptable solution that makes us comfortable and is consistent with what we’ve done with YouTube and other partners,” Verizon Chief Media Officer John Nitti said on June 25.

According to the Wall Street Journal, Verizon suspended its advertising on Facebook and Instagram after the Anti-Defamation League released a screenshot showing a Verizon ad next to a Facebook post alleging that FEMA was getting ready to put people in concentration camps.

Facebook released a statement that pointing to billions of dollars in technology and personnel investments to sort through content, removing nearly 90% of hate speech before users report it. It also agreed to a civil rights audit.

“We know we have more work to do,” a company spokeswoman said while highlighting that it had also banned 250 white supremacist organisations from its core Facebook site and its photo-sharing site, Instagram. 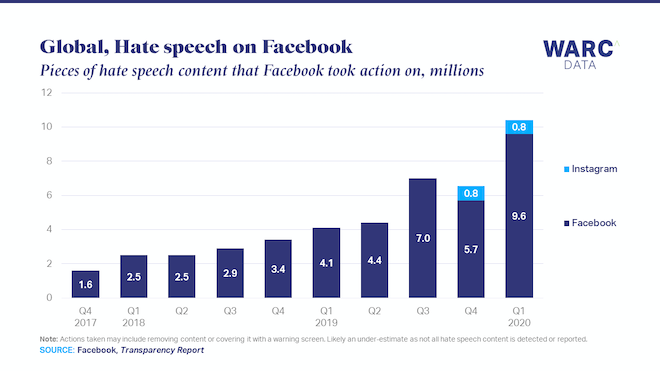 Data firm WARC points out that the social media platform took action on 10 million pieces of hate speech content across Facebook and Instagram in Q1 2020, more than double the amount in the same quarter last year. However, they noted that it is likely an under-estimate as not all hate speech content is detected, particularly on Instagram as it’s heavily reliant on human reporting and users may not know how to flag such content.

With one of the most consequential elections in American history only months away, Facebook’s “too little too late” response is no longer cutting it for the companies whose consumers have grown increasingly activist. Over in Singapore, Facebook did shut-down a purveyor of pro-establishment fake news – Fabrications about PAP – but it stated that it was over policy violations rather than content.

Ultimately, the spate of high profile ad boycotts only damage Facebook’s reputation rather than its bottomline. Top 100 advertisers only account for 6% or $4.2 billion of the company’s total ad revenue with the bulk, more than 70% derived from small businesses.