The Geneva manufacture Introduces not just a new calendar complication, a new old school retro-aesthetic born from handwritten font style but also a new in-house movement and a host of innovations meant to improve efficiency 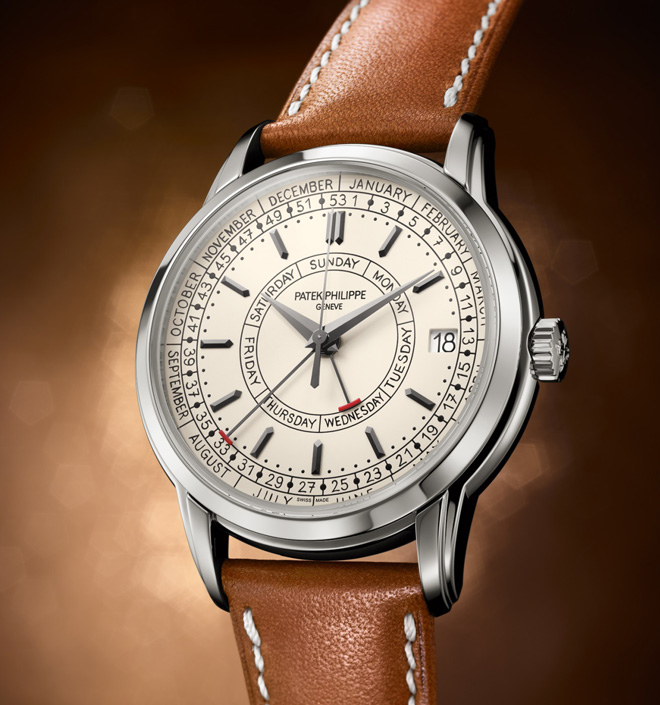 In the new Patek Philippe Calatrava Weekly Calendar for Baselworld 2019, the Geneva manufacture introduces an all new in-house calibre with an all new complication for calendar watches: The weekly calendar. The Calatrava Weekly Calendar is so named for the semi-integrated mechanism that adds week of the year indication to traditional calendar complications like date and day of the week.

For over a century, Patek Philippe became reputed for calendar complications thanks to its development of a myriad of calendar functions including the introduction of the annual calendar complication. Developed as recently as 1996, Patek Philippe introduced the concept of the Annual Calendar in the ref. 5035. With it, all the sexiness and complexity (in terms of number of components required, 316 to the perpetual’s 275, but not the mechanical principles) of a perpetual calendar but at a more modest price point – to wit, an analogy, an Annual Calendar is to the Perpetual Calendar what an Aquanaut is to the Nautilus. 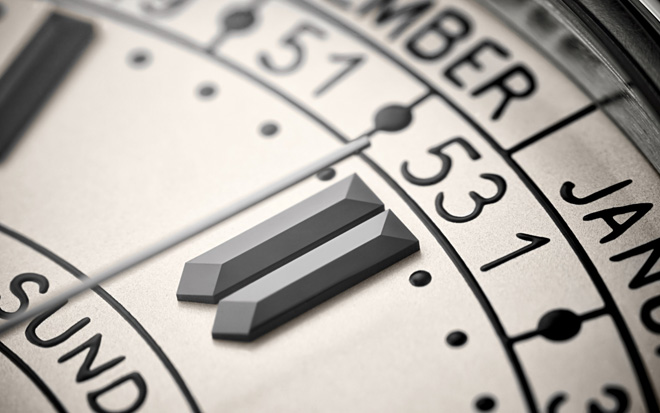 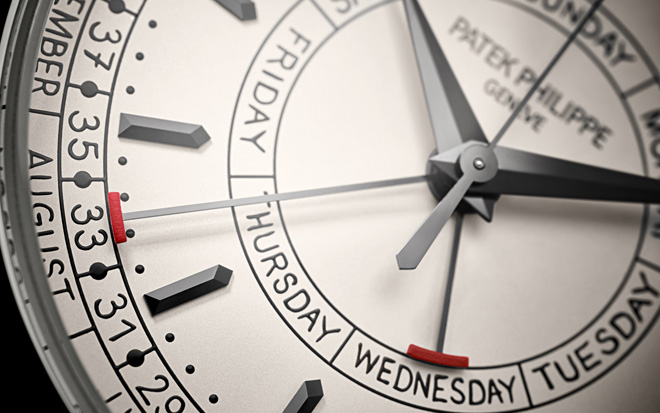 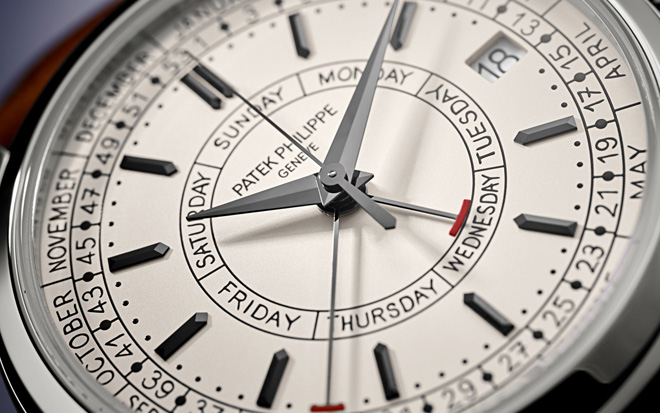 Patek Philippe began serial production of perpetual calendars as early as the 1940s and while the Annual Calendar lacked the leap year indicator and the ability to account for variable lengths of February, the introduction of the ref. 5035 in 1996 was a hit. Editorially, it’s important to note that while the Geneva Manufacture technically had a 25 year patent on the new calendar complication, their innovative concoction of cams and common pinions was so specialised that other watchmakers were able to engineer their own versions. 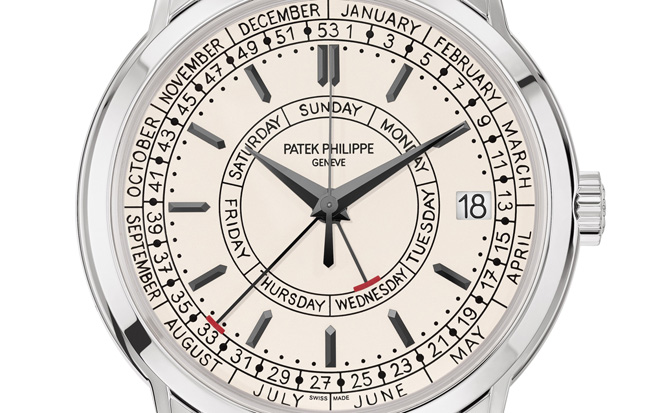 Even though based on the brand’s workhouse calibre 324, the Geneva manufacture’s newest in-house calibre is the result of years of development work. The newly christened Calibre 26-330 also enjoys a semi-integrated mechanism with 92 additional parts, an essential addition which introduces a 7-point star on the hour wheel in the center of the movement controls the day-of-week display. Via a lever, a second 7-point star with an extended Sunday tip drives the 53-tooth week wheel of the Calatrava Weekly Calendar but the calendar complication is not the main attraction, a whole host of horological innovation lie under that gorgeous opaline dial. 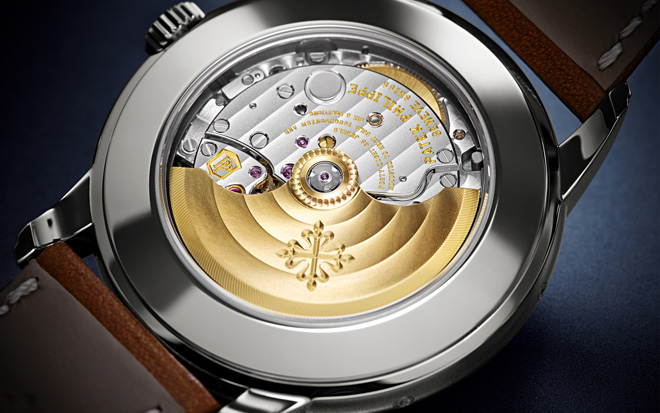 The new calibre features innovations emblematic to the famed Genevan manufacture’s prowess, improving both performance and dependability. Among the technical improvements, the maison’s watchmakers eschewed the traditional center second pinion with friction spring for a new patented nickel-phosphorous alloy made using a LIGA process (lithography, electroplating, molding) and then completed with a gold-copper-iridium coating. This avant-garde component with long split slotted teeth, is based on an anti-backlash third wheel, the unique geometry of each tooth features tiny integrated 22-micron leaf spring that engages with the second pinion teeth to suppress vibrations of the seconds hand without any prior adjustment work. Friction is further reduced by suspending the pivots of the seconds-hand arbor between bearing jewels. Furthermore, the self-winding mechanism was also completely reworked and refined; by changing the shape of the winding rotor with two rounded recesses on both sides of its axis of rotation, and introducing a new patented clutch wheel in place of the traditional uncoupling yoke with a pinned spring, the manufacture has managed to improve the efficiency and longevity of the unidirectional winding mechanism. Finally, a stop-seconds function allows to the second accuracy when setting the time on the Patek Philippe Calatrava Weekly Calendar. The calendar displays advance semi-instantaneously in discrete steps to avoid energy consumption peaks. Corrections of the day-of-week and week-number displays are performed with two push pieces recessed in the case flank at 8 and 10 o’clock. The date can be corrected with the crown pulled halfway out thanks to a fail-safe concept, the user can perform such corrections at any time of day or night without risking damage to the movement. 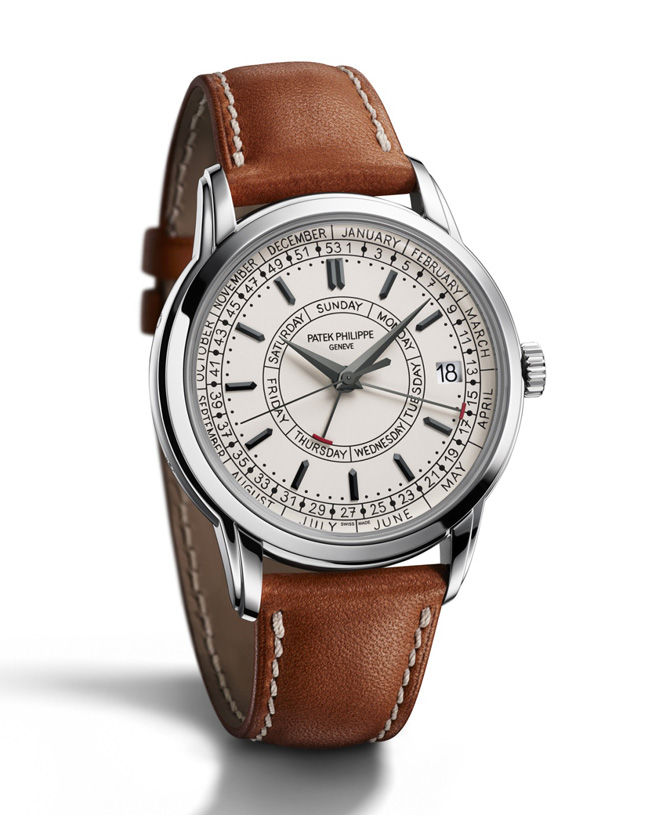 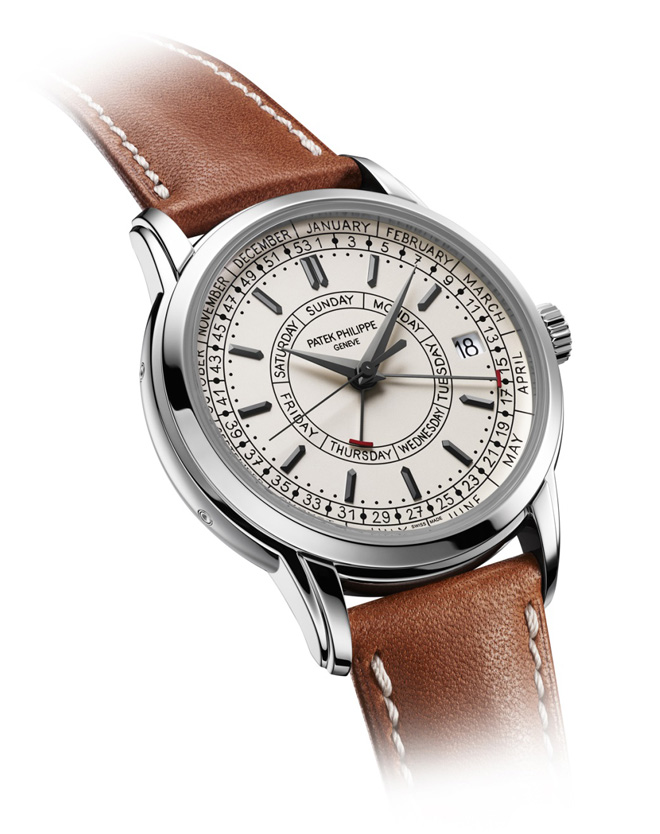 In addition to the iconic Calatrava case, the design language of the Calatrava Weekly Calendar is evocative of a bygone era for good reason. The dial is reminiscent of hand painted numerals, a hallmark of vintage watchmaking before printed dials. The new Calatrava Weekly Calendar uses typography created specifically for the Baselworld 2019 novelty based on the handwriting of one of the manufacture’s designers hence the letters and numbers of the new Patek Philippe Calatrava Weekly Calendar are absolutely unique. That said, these are not hand painted like on watches of old but carefully printed in black. Furthermore, this “retro feel” is further enhanced thanks to the case inspiration – the Ref. 2512, a one-of-a-kind Calatrava made in 1955. With such a provenance, the new 40mm Patek Philippe Baselworld novelty  enjoys classical finesse of a bezel which meets the two tiered tapered lugs. Meticulously hand polished, the visual dramatism of the latest Calatrava is further enhanced by the box sapphire with a slightly cambered profile. 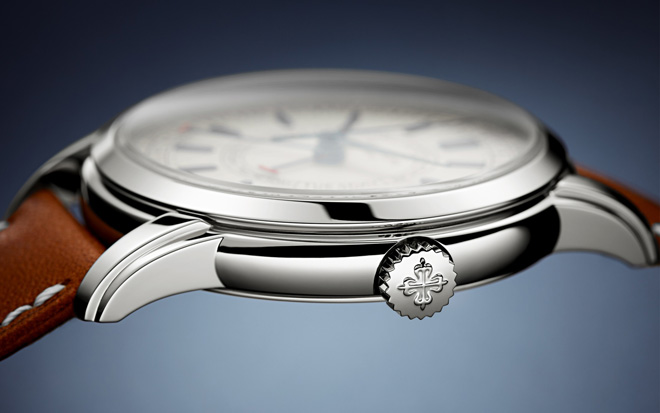 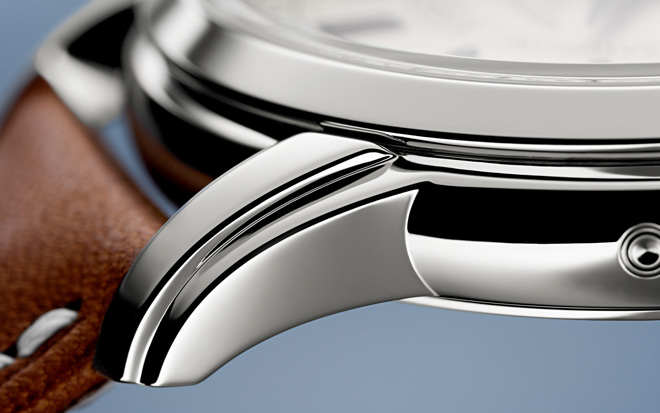 Aesthetically, the Ref. 5212A-001 Calatrava Weekly Calendar is impeccably dressed up in silvery opaline dial and while not a sports luxury watch with larger proportions, the unusual layout renders Patek’s latest Calatrava a head turner thanks to its five central hands, a rare configuration for calendar complications. The hours and minutes of the Calatrava Weekly Calendar ref. 5212 are indicated with elegant Dauphine hands in blackened white gold. They feature two lapped facets, a perfect match for the applied baton indexes in blackened white gold with four lapped facets each. A slender counterbalanced hand tracks the seconds. The day of the week is displayed by a hammer-shaped hand with a red hammer head on a circular scale in the middle of the dial. A second hand of the same design delivers week number and month readings on two concentric scales at the periphery of the dial. These indications follow international ISO 8601 standard, that is to say that Patek Philippe chose Monday as the first day of the week rather than Sunday. The first week of the year is the week that includes the 4th of January. The 53-graduation scale considers years with an extra week. This is the case every 5 to 6 years. The next occurrence falls in 2020.