The Panerai Mare Nostrum is the most desirable after chronograph to never have been made (beyond a prototype) – at least till modern times, get this while you can. There are only 1000 pieces It’s thought to be among the most desirable after chronographs to never have been made (beyond a prototype) – at least until modern times. The Panerai Mare Nostrum has through its combination of good looks and name, translated from Latin, “Our Sea” – a reference to the conquests of Mediterranean waters by the Romans, is both evocative of the romanticism and aesthetic appeal (not to mention reliability) which forms the foundations of a brand forged in the crucible of war.

A limited edition chronograph remade from another limited edition chronograph (the original being the 52mm behemoth 1943 prototype intended for naval officers which never got made), the original 42mm civilian re-edition was launched in 1993 and another within the batch – the Mare Nostrum Slytech 5218-304; In 1997, Richemont (then Vendome) acquired the brand and released a Mare Nostrum with a face-lifted dial, moving minute rails towards the periphery and most notably, giving the bezel a polished inner ring with indexes matched to the tachymeter scale on the outer ring. The 2017 re-issue Panerai Mare Nostrum Acciaio PAM 716 follows in the same faithful recreation of the civilian classic (read: 1993 version) save for the additional text on caseback and crown. The latest Panerai Mare Nostrum chronograph PAM 716 enjoys the same blue dial as the first edition but a notable aesthetic detail can be found in the effort taken to “age” the Superluminova on the hands and indexes to a tan which mimics the tritium lume on the 1993 pre-Vendome original which was initially white but as matured into a creamy brown.

In addition to the physical and aesthetic similarities (42mm stainless steel case with round chronograph pushers and 60km/h tachymeter bezel), the limited edition 1000 piece Mare Nostrum also returns with the same hand-wound, COSC-certified OP XXXIII calibre, exclusive to Panerai, based on ETA 2801-2 with Dubois-Dépraz module which was found on the original model; and like said original, it also comes in a similar Luigi Durand De La Penne, an Italian Navy destroyer shaped box from the same period of that first civilian Mare Nostrum. 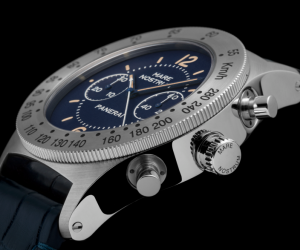 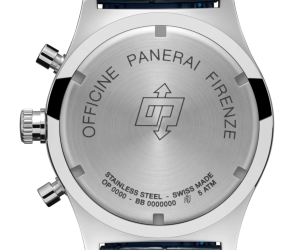