While minute repeaters have become increasingly common in high horology, Jaquet Droz excels with its own unique composition – seven miniature automatons with one of the worlds most celebrated grand complications in the unique Jaquet Droz Tropical Bird Repeater When LUXUO spoke to Lord Andrew Hay of Global Head of Knight Frank’s wealth division, he intimated that artworks like Renaissance masterpieces often accrue mind-boggling valuations because they are singular creations; None others like it exist. Whereas in the increasingly commoditised world of fine watchmaking, even a limited edition might existed in multiples of hundreds if not thousands, enter Jaquet Droz’s Newest Tropical Bird Repeater. 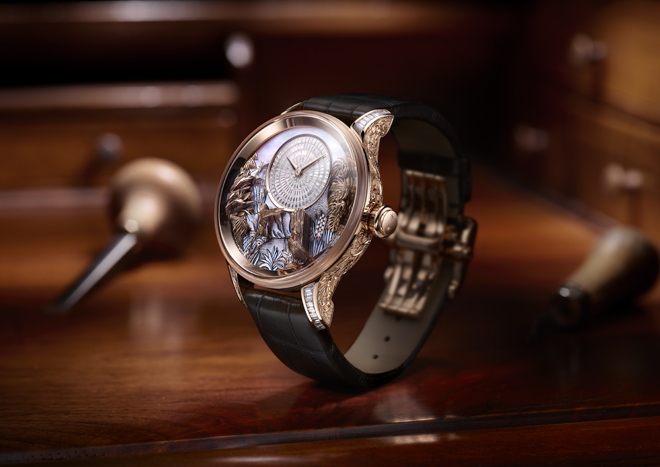 Birthed in their specialist Ateliers d’Art department, Jaquet Droz gave its artisans and watchmasters full creative and artistic license for its latest Tropical Bird Repeater. In keeping with the brand’s naturalist philosophy, a lush tropical landscape complete with natives to its environs are hand carved and entirely animated with a frolicking peacock, toucan, dragonfly, and hummingbird.

Artists for Jaquet Droz Ateliers d’Art also departed from its traditional high profile opulence, don’t get us wrong, the unique Tropical Bird Repeater is still plenty opulent, just a little more understated this time – nature is expressed in tone-on-tone colour-palette against a backdrop of shimmering pink mother-of-pearl and a subdial in full pavé baguette-cut diamond, each one in its own invisible setting. The singular limited edition Jaquet Droz Tropical Bird Repeater also premiers a new world first – an exclusive animation of the hummingbird fluttering its wings 40 times per second. It’s a surprisingly rapid pace, not to mention a serious challenge for the Jaquet Droz watchmakers, who were determined to replicate the hummingbird’s distinctive high-speed wing movements as faithfully as possible. 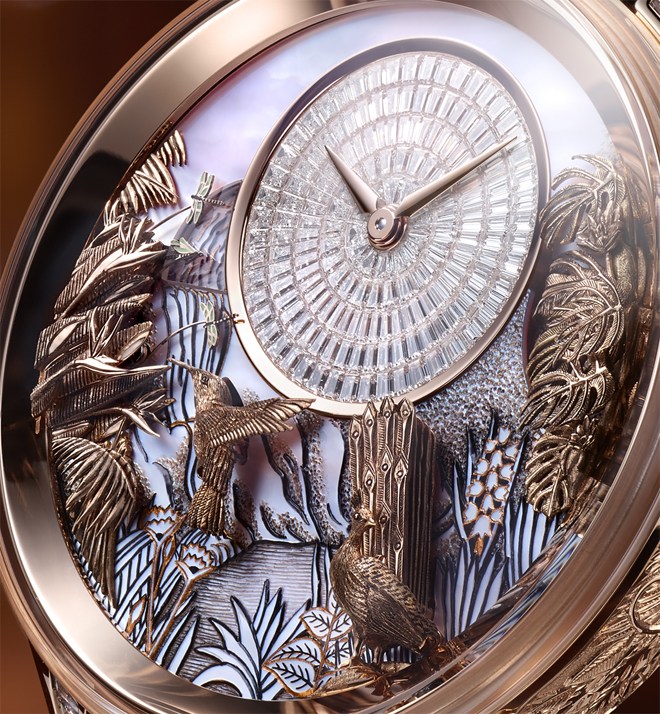 Other marvellous theatrics of the latest Tropical Bird Repeater include a peacock to the right of the hummingbird, fanning out and then folding up its tails as part of a courtship ritual and a companion toucan at 3:00 pops out from behind the leaves of a Monstera deliciosa plant and opens its beak as if in praise of its fellow fauna. The miniature forest is topped off with three graceful dragonflies, dancing through the air, adding to the magic at all hours of the day thanks to tiny wings painted with Super-LumiNova. Overall, the latest piece unique Tropical Bird Repeater showcases a total of seven animations that can last over 12 seconds and are capable of up to four different scenarios.

Birth of a Jaquet Droz Masterpiece

While minute repeaters have become celebrated if increasingly common fixture in high horology, Jaquet Droz excels with its own unique composition – seven miniature automatons with one of the industry’s most celebrated grand watchmaking complications. The minute repeater can be set to mark the hour, quarter hour and minute with vibrating chimes set off by hammers inside the case. The speed of the minute repeater is regulated by strokes of small leaf springs on the outside. Some of the other innovations in the complication include new rack springs, an extended pause between the quarter-hours and minutes, and a major third to ring on the quarter hour. 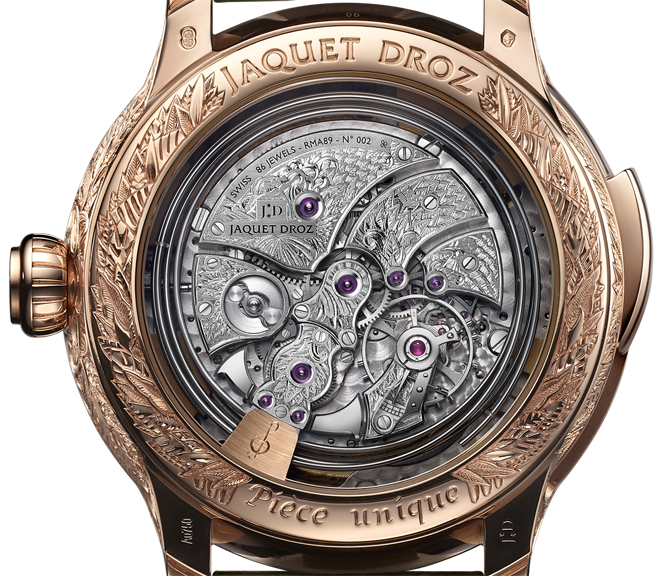 Dial-side, the technical marvel is dressed with intricate detail of Monstera deliciosa, a monstrously delicious species of flowering plant native to tropical forests of southern Mexico, is hand replicated and then applied along side tropical firms on the dial, giving it life-like realism thanks to their individual engraving and painstakingly painted elements. The background tropical fresco is given a breath of life courtesy of a river flowing beneath a waterfall sustaining the lush tropical flora.

In another world premier, this is also the first Jaquet Droz Tropical Bird Repeater designed with a dial featuring 180 baguette-cut diamonds (total 1.8 carats) that are invisibly set in the center, serving as the landscape’s previous life-giving “sun”, relaying its brilliant countenance to the tropical fresco residing beneath. The red gold minute and hour hands orbiting the sun tie in perfectly with the 47 mm case that is also made of red gold and whose horns side and case middle have been hand-engraved in the Ateliers d’Art. The Jaquet Droz artisans also set the lugs with an unprecedented 36 baguette-cut diamonds (total 2.76 carats).